One of the most interesting articles to archaeologists and antiquaries in the current number of “Archaeologia Cambrensis” by Professor Rhys, being epigraphic notes on a number of inscribed stones, including the Caldey Island, at Caswilia, Cam Hedryn, and Carey, in Pembrokeshire at Castell Dwyran, Carmarthenshire; at Henfynyw, Llandewi-aberarth, Llanarth, and Llanllyr, in Cardiganshire, and that at Devynock, in Breconshire. Last year for the first time Principal Rhys had opportunity of inspecting the Penymynydd stone, Ystradfellte, which was originally in the county, but which is now in the grounds Edwards, Fedw Hir, near Aberdare.

This stone was described by Professor Westwood his “Lapidarium Walliae,” p.p. 70, 71, plates 39,5, but was subsequently completely lost sight of until it was re-discovered in 1893 by Mr T. Thomas, of Cardiff, in its present position, Mrs Edwards informed him that her late husband brought it from land of theirs near Ystradfellte. This stone contains a number ogham marks which, however, Professor Rhys unable to read to his satisfaction, and he urges Mr Thomas or some other member Archaeological Society it’s publish an exact representation of the stone.

The brakes moved off at 9 o’clock, and at 10 the party leached their first stopping-place at be crossroads. The party walked over a mountain sheep pasture to Bedd-y-Gwyddyl, to view the cross in raised turf one foot high by two wide. Popularly the name is taken to indicate the Irishman’s Grave” (Grave of Gael). Continuing their journey the party made for Fedw Hir, near Llwydcoed, the well-favoured residence of Mrs Richard Edwards, by whose daughters, the Misses Edwards, the visitors were met on the lawn. The object of the visit was the ancient cross-incised stone (now standing in a flower garden), and to this Mr J. H. James directed attention.

Find out more in this PDF. 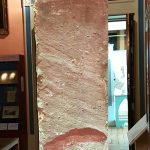 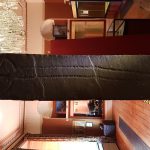 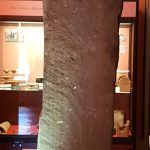 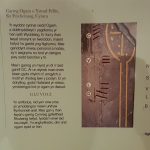