Daniel Lloyd on September, 1651 in an address which was presented from his church to Cromwell after his victory at Worcester. On the address which was signed by him, Morgan Lloyd, John Browne, and David Maurice.

Daniel Lloyd was one of the most important Wrexham men of his day. He was a Commissioner under the Act of 1649 for “the Better Propagation Preaching of the Gospel in Wales,” one of the thirteen sequestrator’s for North Wales approved on the 18th February, 1649 or 1650 and Treasurer to the same; he was also one of the Commissioners for Denbighshire of the Act of October, 1653, “for the relief of Creditors and poor Prisoners,” treasurer to those Commissioners; and, as Mr. J.H. Davies tells, steward in 1655 to john Jones, Esq., of Maesygarnedd for his lordship of Bromfield and Yale.

He was satirized as a “sequestrating saint” in a scurrilous ballad dated 1647. From the pleadings in a certain suit held in 1655, it would appear that he was also the Receiver in the District, of Estates that had been forfeited to use of the State.

There is a letter inexistence to Mr. Daniel Lloyd from Col. John Jones in which the writer says, “I thank you for the account you gave me to the Sts. Church of God with you, and blessed be our Lord that preserves you from being entangled with ye snares of the serpent, and leads you with so much zeal and fervency to avoid contentions and strife, and to provide the people of God to unity and love, which are the bonds of peace and perfection.”

Men with religious convictions and ideals began to guide the evolution of the Welsh people, amongst whom we find Daniel Lloyd, and his great contemporaries, Morgan Lloyd and Vavasor Powell. A small society of such men gathered together in Wrexham. This society, consisting of Baptists and Congregationalists was called the Church of Christ, and Daniel Lloyd was one of the more prominent members of it.

After the Battle of Worcester, he, with others, expressed gratitude for “the many kindnesses and marvellous love tokens of our Eternal Father – to so unworthy a people.”

Thus during a time of great insecurity and upheaval, politically and religiously, Daniel Lloyd lived and laboured, but he appears to have been faithful to his ideals throughout the dangers of those dark days.

Freedom of worship, one of the principles which he earnestly sought, was ultimately secured, at any rate for a while, and during the Commonwealth an Act entitled “An Act for the better Propagation and Preaching of the Gospel in Wales and redress of Some Grievances,” was passed.

In this Act, a copy of which is preserved in the British Museum, 71 are named as Commissioners one of whom was Daniel Lloyd, and they were held responsible for the reform of religion.

It is interesting to note that these Commissioners laid importance on the ability to preach Welsh, for it was realised that ignorance of the language of the people was at the root of the evils existing at the time.
Lloyd’s heart like that of Walter Caradoc, overflowed with prayers and praise to God for sending such a man as Cromwell, and although his duties under the Propagation Act were drastic it was only drastic measures that could cope with the evils then rampant.

Towards the end of his career, he appears to have held office as Receiver of Estates that had been forfeited to the use of the State. He was also a steward for the Lordship of Bromfield and Yale when Col. John Jones, of Maes-y-Garnedd acquired that lordship.

Although a man of position and influence it is evident from correspondence that he possessed considerable zeal and fervour. He is described by his friend, Vavasor Powell in an elegy now preserved in the National Library at Aberystwyth as a man of judgement and an upright and steadfast man of praise.

It was feared a short time ago that new developments in the neighbourhood would interfere with the site of his grave, but efforts have been proceeding to save it from depredation.

It is gratifying to know that the Inspectorate of the Ancient Monuments for Wales of his Majesty’s Office of Works has said that every endeavour will be made to avoid interference with the grave.
This is mainly due to the efforts of Mr. G. Vernon Price, clerk to the Wrexham Rural District Council.

In the corner of a field of a farm at Abenbury, near Wrexham, is a solitary grave whose broken covering records that the body of Daniel Lloyd was laid to rest there in the year 1655.

The Grave of Daniel Lloyd

The gravestone is an unusually large and plain block of sandstone measuring 6ft 8in long by 2ft 8in wide and bears the inscription:

A visitor feels there is something more than an ordinary grave here. The question arise: Who was Daniel Lloyd and how came his memorial to be in its peculiar position.

I Daniel Lloyd of Wrexham, in the county of Denbigh, doe make this my will and testament, in manner and form following, First, I do make and appoint my wife Rose, executor of this my will, also I give and bequeath to mi said wife, all that my dwelling house in Wrexham, garden, stable, and backsides thereunto belonging, together with those four small houses or tenements to the said dwelling house belonging, for and during all the term of years unexpired of the lease by which I hold the same from, John Jeffrey’s Esquire, and under rent of four pounds, yearly, besides hens and reaping’s do for the same. 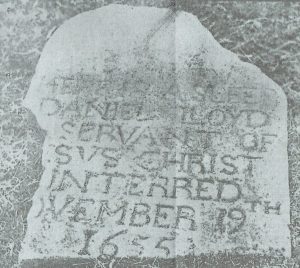 Also I leave to my said wife and to her heirs for ever my me do in Allington, and the little croft thereto belonging, called Garth Hayem, and to her heirs for ever. Also I give and leave unto my said wife, her heirs and assigns for ever all that parcel of lands called Kay y Glwion, and that other parcel of lands in the tenure of John Davies Butcher, called the New Church Yard, she paying yearly during her life out of the profits of the said last parcel to Mr. Morgan Lloyd Minister of Wrexham Church, the sum of forty shillings to such power of Wrexham as she with the advice of two of the congregated church of Wrexham shall think fit yearly during her life.

Also I give and bequeath to my servant Isabell Davies twenty pounds, Also I give to my servant Elizabeth Hughes thirty shillings, and to my servant Edward thirty shillings, and to my servant Jane ten shillings, and to Dorothy who was my servant in Pickhill ten shillings. Also I give to my cousin William Jones of Wrexham three pounds, and to my cousin Ann Harmer forty shillings. Also I do give to Hester Jones (who hath lived with me as my child, or servant, from her infancy) twenty pounds. Also I do give unto my sister Ann Laute five pounds. Lastly I do give and bequeath all the rest of my personal estate, goods, cattle, and cattle’s to my executor before named and appointed herein being confident, she will justly and truly see my just debts paid, legacies performed and discharged and my corpse interred decently as v. member of Christ my Lord, in some parcel of my own ground and not in any church or churchyard as hath been and still used by most of this nation., This my will is written with my own hands dated the sixteenth day of October one thousand six hundred and fifty five.

Signed and Sealed by me
Daniel Lloyd

Back to Welsh Preachers