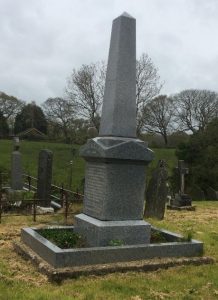 The memory of one of Wales’s early pioneers in music, Dafydd Slencyn Morgan (1752 – 1844), will be perpetuated today with a granite memorial column will be unveiled at Llangoedmor Parish Churchyard, near Cardigan, where he lies buried.

The memorial has been erected by a local committee and subscribed for by over 1,200 people in the area.

Dafydd Slencyn Morgan was born in 1752, the son of a verger at Llangranog. He lived for 92 years and he spent over 60 of those years in teaching the Welsh rural population the way to sing in four parts. He was an itinerant teacher – most of the educational pioneers of Wales were – and he lived on the bounty of farmers and slept in their barns.

Nothing much is known of his earlier years. When he was 21 years of age he joined the Pembrokeshire Militia, and here his love of music was awakened and developed. He became a member of the band and was initiated into the mysteries of harmony.

When he left the Militia he set about composing hymn tunes and anthems, but at that rural Welshmen only knew how to sing airs. He decided to teach his people two-part and four-part singing, and with the aid of a clarinet he succeeded, and he initiated the art of harmonising for which the Welshmen is so noted today. He travelled, lived a frugal life, held classes in one place (generally a farmhouse) for months at a time and overcame the determined opposition of the churches to instrumental music.

Wales at the time heard its instrumental music only at fairs and in tap-rooms, when harps, flutes and violins were used to accompany singers or ballads and folk-songs, and the saintly accounted these instruments as “Offerynnau’r cythraul” (the devil’s instruments).

After many years of itinerancy Dafydd Slencyn Morgan settled down at Penllwyndu, Llangoedmor, and became the precentor of Capel Isaf Congregational Church, Llechryd. He applied himself to the music of that district and died in 1844. He was buried in Llangoedmor Parish Churchyard, but the exact spot of his resting place is not known.

His best known anthem was “Teyrnasa Iesu Mawr,” and his hymn-tune “Llangoedmor” is included in most Welsh hymnals and frequently sung in the churches today. These together with a large number of other tunes, have been collected by the committee and published in a booklet.

These have been arranged by such noted Welsh musicians as D. Emlyn Evans, John Hughes, Dr. David Evans, J.T. Rees, and Professor D.E. Williams, and a selection of them will be sung at a memorial service at Llwynadda Calvinistic Methodist Chapel, Llechryd, this evening when Mr. D. Owen Evans, M.P. for Cardingshire (who will unveil the memorial), will lead the united choir representative of all the local churches.

The Archdruid Gwili, Mr. D.B. James (Mayor of Cardigan), and others will deliver addresses at the unveiling ceremony

Back to Welsh Preachers