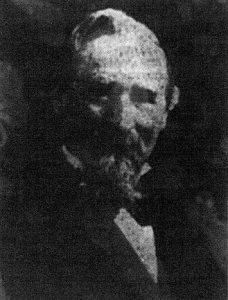 After a lengthy illness the Rev J. Grawys Jones, pastor of Ebenezer Welsh Congregational Church, Trecynon, passed away last Saturday. Sixty-seven years of age he was a native of Glandwr, Pembrokeshire. It was at Carmarthen Presbyterian College that he was trained for the ministry, under Professor D. Jones.

His only pastorate was Ebenezer, in which church extended a call to him before he had completed his studies in college. He came to Trecynon when 27 years of age and so he has ministered to Ebenezer and Cana for 40 years without a break, winning the esteem and high regard of deacons, members ad frequenters of the two churches, and the residents of Trecynon and Penywaun in general.

Mr Jones succeeded the Rev W. Edwards as pastor of Ebenezer, and it is interesting to note that the late Mr Edwards was pastor of the church for 41 years. Thus we see that Ebenezer holds the unique record of having two pastors only over the long period of 80 years. Here it may be on interest to observe that contemporaneous with the two pastorates there have been only two precentors.

During the reign of the Rev W. Edwards, Dafydd John was “arweinydd y gan” for 40 years. Dafydd John was the father of the late Mr Tom John, M.A., J.P., Llwynypia, school-master, editor, and past president of the National Union of Teachers. For the last 38 years, the precentor has been Mr. W.E. Thomas, the well-known orchestra leader.

A deputation of Sunday School Children

Some 25 years or so ago, on the death of the minister of Sardis, Pontypridd the Rev Grawys Jones received a pressing call to become the pastor of that influential church. He accepted and handed his resignation to the deacons of Ebenezer. He was asked by them to reconsider it and to stay on at Trecynon, but he did not promise. The late Mr Richard Rowlands was then superintendent of the Sunday School, and one Sunday he and all the children of the school formed themselves into a deputation went to Mr Jones’ house and begged him to remain with them. This appeal, so spontaneous and so sincere of character, was too much for Grawys, who surrendered unconditionally much to the joy of the children, and the elders when they heard of it.

For indeed he was a firm favourite with young people. He was beloved by them all, and he took the utmost interest in their spiritual and moral welfare. He worked hard with the juveniles for years, conducting Bible classes and preparing them for the annual Scripture examinations. Almost invariably the young people of Ebenezer were in the top of the list when the results were published. 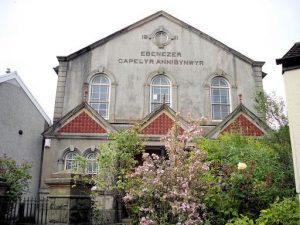 He was gifted beyond measure for the ministry. He was without guile, kind in his manner, generous in helping the poor, as many poor will testify. Above all, he possessed tact, which is an indispensable quality for a minister. He could, too, on occasions, be firm in his opposition to certain proposals which came before him and his deacons.

For some years he acted as secretary of the Welsh Congregational Union, and he has passed through the chair of the Glamorgan Gymanfa. He had been subject to heart trouble for six years or more but struggled bravely to attend the chapel and to preach until he was compelled to give up. It was painful to see him wending his way home on Sunday mornings after service, taking as much as half-an-hour to walk from the chapel to his home a distance of about 300 yards. It was 12 months last June that he preached his last sermon. He wanted to resign the pastorate, but the church was hearing nothing of it.

The deepest sympathy is extended to Mrs Jones in her great sorrow. She was the daughter of the late Mr T. Thomas, Tynywern, Pontypridd, and her brother is Dr Thomas, Caerphilly. Her marriage took place 37 years ago.

The funeral takes place today (Thursday), the interment being preceded by a service at Ebenezer at 1.30 from the house to the chapel the funeral will be private, and all friends are asked to assemble at Ebenezer.

The funeral of the late Rev J, Grawys Jones, Trecynon, took place on Thursday. There was a very impressive service at Ebenezer, conducted by the Rev D. Silyn Evans, Siloa, Aberdare (an old friend of the deceased). At 1.30 the church was filled to overflowing, and as the cortege entered, the orchestra, under the leadership of Mr W. E. Thomas, played “O rest in the Lord.” After the singing of the hymn “Mor Ddedwydd yw y rhai trwy ffydd.” The Rev Silyn Evans paid an affectionate and eloquent tribute to his revered friend. As behavers in prayer, he asked all present to offer a prayer on behalf of the widow, Mr Jones. A few silent moments followed Silyn then spoke of his long acquaintance with his dear brother. Grawys he said that he was a firm believer in the text “Be of good courage.” His cheerfulness was not an act of assumed courage, for his whole being radiated sunshine among all who were fortunate enough to possess his friendship. Grawys was always happy in his work. There were some speakers to follow, added Silyn, and he asked each to be as brief as possible.

The J. Sulgwyn Davies, Siloh, read a portion of Scripture and offered a fervent prayer. On behalf of Ebenezer Church, Silyn said he would ask the secretary (Mr John Lewis) and the precentor (Mr W.E. Thomas), to say a few words.

Mr. Lewis; thereupon said the letters were so very numerous that there was no time to read them. He would simply name the writers. He (Mr. Lewis) would be pardoned for reading a portion of a letter from the Rev. H. M. Hughes, D.D., Ebenezer, Cardiff, for it embodied all the others since it spoke of the loss which the church, the town, and the denomination would sustain by the death of the Rev. J. Grawys Jones.

Mr W. E. Thomas spoke of the privilege which had been his to work with their loving pastor for 38 years. Grawys was an all-round man and moved in every sphere of the church’s life. Mr Thomas hoped that Mrs Jones would be much blessed.

Mr John Jones, deacon, Cana, Penywaun, spoke of the great loss their little church at Penywaun had sustained. The cause had been instituted during the pastorate of the Rev Grawys Jones, who had watched over them with tender care. Today Grawys was a shining star in the spiritual world.

The Rev Philip Price, Glandwr, Pembrokeshire, (the native place of the deceased minister), spoke of the joy it always gave their late pastor when visiting his native town. Mr Jones was always ready to take part in the services at the little church where he first was taught about Jesus. It was a sad thought, said Mr Price that they would see him no more, for his one desire was to begin to preach again. They as a church would ask God to abundantly bless his dear widow.

Rev B.J. Thomas as one of the sons of the church said that the late Mr Grawys Jones was true in word and works. His practical counsel was at all times available. The three outstanding characteristics in Mr Jones’s life were: he was energetic, diplomatic, and benevolent. May God comfort his helpmeet who by her quiet and unassuming manner was much beloved by the church!

The Rev Cynog Williams spoke as one who had worked for 22 years as a neighbour of Mr Grawys Jones. A man with a full heart was Grawys said Cynog. Wherever he went he shed blessings, and he was a great favourite with children. As a co-worker in Christian matters, he was all that could be desired. Abounding in tenderness and sympathy and so soothing in sorrow such a man was John Grawys Jones.

The Rev John Morgan, Bryn Seion, felt more like praying than speaking, but he was bound to say that Grawys Jones was one of the strongholds of Israel. As a servant of God for 40 years at Ebenezer, he had exercised benign influence. Moody’s last words were most appropriate to that solemn service. Earth is opening, Heaven is receiving, God is calling I must go.

Prof. T. Lewis, M.A., Brecon (Elfed’s brother), said many knew Grawys Jones better than himself, yet he knew him well enough to revere him. After hearing all the previous speakers, Mr Lewis said he thought they nearly worshipped Grawys. Brecon College was always dear to Grawys’s heart, and he was always a real supporter by word and deed. Prof. Lewis wished Ebenezer every blessing and the joys of heaven to Mrs. Jones.

Prof. Tom Rees, another son of the church, spoke of his long association with Grawys. A nobler man had never lived and his life would be an inspiration.

The Rev Watcyn Jones, Abercynon (chairman of the North Glamorgan Association) said the Union never had a more devoted servant than the Rev Grawys Jones. Goodness was immortal, and therefore his example would live.

The Rev. Llewelyn Thomas, Groeswen, spoke of the Rev Grawys Jones as a minister who realised that decision and consistency were the characteristics of religion.

The Rev D. Lloyd Morgan D.D., Pontardulais, (President of the Congregational Union) said he had travelled down from London for that service. The name of Grawys was a sweet-smelling savour. His was a charming personality, and he was actuated by divine love, which always displayed itself in compassion for the souls of men. Grawys was very diplomatic and could rule a meeting, softening, as he did, the strictest requirements of order with most acceptable gentleness. Concluding Dr Morgan said their lamented pastor was in every respect a religious leader and a Christian gentleman.

As the mourners left the church, the “Dead March,” was played by the orchestra. United choirs assembled in Mill Street and sang hymns en route to Aberdare Cemetery. It was led by Mr W.E. Thomas. The service at the graveside was conducted by the Rev W.A. Jenkins, Cwmdare.

A memorial service was held at Ebenezer Church, on Monday evening. There was a very large congregation. The service was conducted by Principal Rev Tom Rees, D.D. Bala-Bangor College a son of the church. In the course of an appropriate sermon, based on 2 atrophy 4, 6, 7, and 8, Dr Rees said they had met to pay a tribute to one whose work was now done; also to show their deep respect towards the bereaved family. He (the preacher) felt it an honour to be asked to preach a memorial sermon to one who had been such a shining light in their church for over forty years. A straightforward man was Grawys and he had kept his name honoured all through his long ministry. Mr Jones knew that he had been called by God to the ministry, and had always acted under spiritual guidance. Many a young man found in Grawys Jones when commencing for the ministry, a true friend, but he was unwilling to help any young man whom he thought had not been called by God. Mr. Jones was a good businessman, with considerable ability, and could have been wealthy, but hr preferred devoting himself to the work of the church. Temptation had no place in his life. He was forever giving of his best, for one of the brightest students in his college, and in every sermon that was a bright gem which lit up the whole man. As they looked back upon his work and character, they saw a life which was as light shining and could not be hidden, for he had kept his faith clear and strong through all the vicissitudes of his pilgrimage on earth. In concluding, Dr Rees appealed to his hearers to remember the example laid down by their late pastor, who was in truth a messenger of love from God.

Several of the deceased pastor’s favourite hymns were sung during the service.