Last Saturday 14th of January 1905 in the afternoon, Mr Owen Harris, Trecynon, one of the most prominent figures in the public life of Trecynon and Aberdare, had died. “Flocks brotherly love is shaking his hand, his countenance shines cloudless peace, and humility is characterized in his whole life.” Charities would make unlimited, easily available and has assisted many in distress. Name is holy “Owen Harris,” and respects their (‘goffawdwriaeth,’ “commemoration”). Mr Harris, who was 67 years of age, originally hailed from Llanddeusant, Carmarthenshire, whence he removed when a young man to Ystalyfera, and later to Aberdare.

He opened a grocer’s business in Harriet Street, Trecynon, the industries of the district being at the time in a flourishing condition. Mr Harris was the last of the quartet of prosperous tradesmen who carried on business at Harriet Street, and who, besides being endowed with keen commercial abilities, were also men of culture and no mean literary repute.

As a citizen, he filled the most important offices. There has been a deacon in Mill Road and for 31 years, was a secretary for 21, and was treasurer of the church when he died. He was honoured and Chair Cymanfa East Glamorgan and he was considered one of the ablest laymen in the denomination.

He was for many years an active member of the Aberdare School Board, He was also immensely popular as a Guardian of the Poor, an office which he held for a considerable time. He had served on the Aberdare Local Board of Health, and when that body was merged into the District Council, he retained his membership until the time of his death. The electors of No. 1 Ward held him in high esteem, and he was indeed an ideal representative.

At the last election, three years next March, he was re-elected unopposed. In politics, Mr Harris was a zealous Liberal. On the District Council, he was regarded as a Progressivist. He was brought up as a Calvinistic Methodist, but in maturer years found him a Baptist.

He was one of the deacons of Heolyfelin Baptist Church, Trecynon, of which the Rev. J. Cynog Williams was pastor, and who was preceded by the Rev. W. Harries. The loss which the church has sustained through his removal will be great indeed. Mr Harris was a true type of a practical Christian. He was chary of words but prolific in deeds. The poor of the neighbourhood found in Mr Harries a true friend and benefactor. He was generous to a fault. The cause which he knew not he searched out, and his heart and hand were ever open. By his denomination, he was considered a prince in Israel, and one time he filled the honourable position of chairman of the East Glamorgan Baptist Association. His son and daughter are the objects of wide-spread sympathy.

The interment took place today at Aberdare Cemetery. At the meeting at the Aberdare Liberal Club on Saturday, a vote of condolence with Mr Harris’ son and daughter was unanimously passed.

At the meeting of the Aberdare District Council on Monday, Mr John Howell, who presided, moved a vote of condolence with the deceased’s family. However much they might differ in their opinions, observed Mr Howell, they were all ready to extend their sympathy on an occasion like this. He moved that the clerk be instructed to communicate to the family an expression of the Council’s sympathy. Mr D. P. Davies, in seconding, said he had had the pleasure of sitting on the Council, side by side with Mr Harris, for upwards of 20 years. He was a thoroughly genuine friend and colleague.

Mr L. N. Williams said he had known Mr Harris as a friend and neighbour for the last 40 years, and in every respect, he could venture to say that a better, truer friend never lived. He was an unassuming man, Mr Harries had a sympathetic heart, and his friendship was valued by him very much. The motion was then carried in silence. 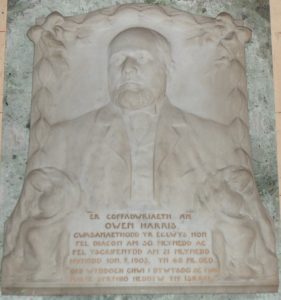 The interment of the remains of the deeply lamented and highly respected Councillor Owen Harris took place on Thursday. A large procession wended its way slowly from his residence in Harriet Street to the Aberdare Cemetery, appropriate dirges being sung en route. In practically every house on the way, there were drawn blinds in appreciation of the one who was being borne to his last resting place.

Also, Mr E. Thomas (Cochfarf), who was one of the representatives of the East Glamorgan Baptist Association, spoke, and “Mae nghyfeillion adre’n myned” was impressively sung.

Practically all the members of the Aberdare District Council and Education Committee were present, and several members of the Merthyr Board of Guardians. Wreaths had been sent by the following: Morgan John and Annie, Henry and Lewis, Mr and Mrs Daniel, Llwydcoed, Mr and Mrs D. W. Price, Mr D. A. Thomas, M.P., Miss Maggie E. Charles, Mr and Mrs W. T. Harris, Mrs Baker, and Heolyfelin Church.