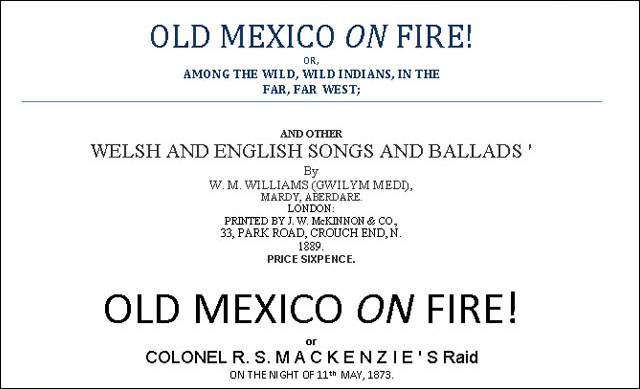 Being aware that the following short Poem, which is published at the request and expense of about fifty of the men who constituted a part of Colonel Mackenzie’s command on that dashing raid into Mexico, is entirely unworthy, and gives but a faint idea of that heroic enterprise, which was so gloriously successful in breaking up and capturing a band of marauding Indians, in another country, I beg only to say, as an excuse for its many errors, that it was written without any literary pretensions whatever, during a few idle hours,—and that:

My object in my feeble rhyme
Is to improve my style of writing,
And help to while away the time,
When I am not with Indians lighting.

However, as some lines will be found rather severe on the Indians, taken as a body of people, I wish to state that reference is made in particular to those tribes who hold out in their hostilities in spite of all entreaties and inducements, and still continue to commit depredations along the frontier of the various States and Territories. How far the reader may approve of the feeling contained in this unaccomplished attempt, I do not pretend to consult; I would merely suggest, that at the time, I feel, and truly believe, what I have written. Not being anxious to enter on an argument regarding the best measures to reconcile hostile Indians, and fearing lest the Preface should grow longer than the Poem, I shall conclude by wishing the readers, especially those who voluntarily subscribed for the publication of this pamphlet— Good Luck!

Sincerely Yours
W. M. W.
Dedicated to the “Fourth Cavalry;” wishing its Officers and Enlisted Men, each, and all, a Merry Christmas and Happy New Year.
Very respectfully yours,
W. M. Wiliams

THE “Gallant Fourth” renown for skill and might,
With loyal breasts for justice, truth and right; i
And arduous love, such as their fathers bore
In peace and freedom’s cause in days of yore;
Withal enraged by depredations drear,
Committed on their native land’s frontier;
Remembering yet the “Henrietta sneak,”
And that more bloody act upon “Salt Creek”
Recurring to their minds—this wise they stand
Around their “Chief,” in union, heart and hand,

Full twenty leagues beyond the Rio Grande,
On Rey Molino nests a filching band
Of “Kickapoo’s,” whose huts of mud and reeds
Are almost hid from view by brush and weeds;
A place befit such crew to crawl and creep,
And as by instinct taught in dread to peep.
Their dens by many scalp bedighted o’er
Are proper haunts to plan and plot for more,
Since every toy or deadly weapon found
Within the place their torpid thefts expound;
Such is the eyrie where the lurking foe doth hide,
And there the troops this night must go whate’er betide.

The day is scorching warm, although in May,
Yet man and steed their wonted strength display,
As from the various camps they swiftly pace
To meet at the appointed, distant place.

The sun is slowly setting in the West,
And cooler wafts the breeze, hence doubly blest’;
The troops are met, refreshed, though short their stay,
And all in readiness to march away.
Their arms are well secured, their girths are tight,

Their ammunition fitted for the fight;
And every aid derived from skill or art,
Is by their leader taught them ere they start;
And these precautions did them well betide,—
For hard, and swift, and long was that night’s ride.

Behold, they stand to horse, they mount, they start;
And thoughts of gladness rise in every heart
In number not above four hundred strong,
Yet grand and orderly they stride along.
This small command, to view it from afar,
Seems stately sailing like a man-o’-war
That you would watch when leaving some calm bay,
On a clear evening of a summer’s day.
The sun is setting fast, and casts its beams
Along the sky in lovely russet streams;
And as its last departing quivering rays
Dwell on their swords, a beauteous scene displays.
Onward they go, but slow as yet their pace,
Their steeds exultant neighing for a race;
And would, had they been let, dash right ahead,
Since well had been their care, and goodly fed.
The men, well-disciplined, are stout and strong,
And each and all are active, brisk and young.
Their leader, too, whom all at once obey,
A little is, if aught less young than they:
Though many stormy days and sleepless nights,
And many wound received in former fights,
Hath he endured and stood, yet is as brave
A soldier as our land ere had or have.
Away they go, he leads their pathless course,—
And better rider never spur’d a horse.

The night is come, the sky is pitchy dark,
And nought is seen, save now and then a spark
Or gleam of that pale light that wanders far
From some mist-hidden solitary star;
Or from their coursers’ hoofs a fiery splash,
That at intervals rise as on they dash;
And thus, with darkness thick on either hand,
Descend they down the banks of “Rio Grande.”
They halt,—and all is still above, around;

Below is only heard the deep, sad sound
Of that fierce stream, enwrapt in hills and wood,
That turn its wildness into solitude.
How quickly done! A voice is heard to say
Commandingly, “Onward, men,” and, ” this way.”
No Sooner heard than all are in the tide;
Though hard the task, they land the other side.
The river crossed,—away, away, they go,
With thoughts revengeful on the pilfering foe;
Nor vainly think of danger, home or friend,
But firmly strive to gain their journey’s end.
All obstacles that in their road do lay,
Or hindrances are cut or thrown away:
And thus o’er hills, ravines, through wood and bush,
1 n warlike form they boldly leap and rush;
Though sleep the previous night their eyes had fled,
And rough had been the road that day they led,
And few the comforts that were for their aid,
Yet none is heard to growl or to upbraid.

The sun is up, and glorious is the scene;
The sky is clear, the land enrapt in green:
Far as the naked eye can veer around
Are hills and dales, and shrubs and trees abound.
And wafting gently comes with soothing ease,
The dewy freshness of the morning breeze.
And these enlivening gifts add strength and life
Within the men for the approaching strife.
Away, away, ‘and fast, and fast, and faster still;
As one is crossed they hail another hill,—
Until the summit of the last is gained,
And full view of the struggling place obtained,
Without a. moment’s hault to draw their breath,
They hurry on to victory or death:
With loaded carbine, and with sabres ground,
And warlike cheers upon their foe they bound.

Their leader still continues on the lead,
And orders promptly gives how to proceed.
From place to place, from troop to troop he hies,
And not a deed or move escapes his eyes.
At once how thick and fast the bullets fly,
And clouds of smoke arise unto the sky,
As volley after volley fast and hot,
Are hurling through their dens of carbine shot.
Sharp, fierce and pressing is the gallant charge,
Some mounted, some afoot, but all at large
Their duty bravely execute, and now
Is seen a desperate struggle through and through,
Some hold the steeds, some shout in joyous ire
And lo! the place is in a blaze of fire.

Ten minutes past—the victory is won
And every Indian captured, killed or gone.

The country’s friends—ye patriots old and young,
‘Tis yours to say, this “raid” was right or wrong;
The law of Nations (?) surely must forbid
Armed men to cross their bounds exposed or hid,
But does it grant these roughs the power to steal,
To cross, re-cross their bounds when’er they feel ?
Or are those men of quak’rish faith so blind,
As to uphold these wrongs on human kind,
And will our Government endure these bands
Until their number thrice die by their hands?
Let those who dream in sympathetic mood
Of friendly terms and moral attitude,
Once more recount the depredations drear
Committed by these thieves year after year,
Recount the widows’ wails, the orphans’ tears,
For husbands, fathers .killed by these man-bears;
Or listen to your fathers’ mournful tales
Of children stolen, ringing through our vales,
Then preach these words in thoughtlessness begot—
To pity the poor Indian’s hunting lot!

Though I would not, for all the world contains,
One item add unto the Indian’s pains,
Nor wish to cast the slightest shade of gloom
On acts of kindness shown his hapless doom;
As doubtless, all enlightened men must feel
For ills and maladies they cannot heal.
And may those freeborn thoughts whose wings expand
O’er all our people, never leave the land;
And mercy, hailing mercy e’er be, found
To reign predominant from bound to bound.
But let us not forget that sterner thought—
The thought of justice, which, when rightly wrought,
Sublimely burns, a standard true and bright
Within the mind, who’s rays of radiant light
Throughout all times, and of immortal birth
Are seen and felt alike, in Heaven and Earth.
So guided by this never erring light
We travel safely through the darkest night;
May justice ever be our boundary line,
Withal our cannons roar and sabres shine.