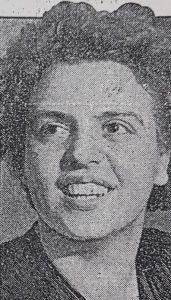 They called her “our Norma” at Aberdare.

But to a wider circle, she is 25-year old Miss Norma Morgan, the factory girl whose lovely voice won her a place in the English Opera Group.

She had been a keen amateur contralto for five years before her chance came. The she took part in Trecynon Choral Society’s production of “Jephtha,” with guest artiste Elizabeth Parry.

So impressed was Miss Parry that she arranged an audition for Norma with an Arts Council expert. And within a fortnight came an offer for her to join the Opera Group in London as a trainee.

But cash was the problem. She looked after an invalid father and a schoolboy brother. Her mother had died a few months earlier.

That is where the people of Aberdare took a hand. Trecynon Choral Union organised a fund. Mr. D. Emlyn Thomas, M.P. and local councillors gave their support.

Choirs, concert parties, businessmen, miners, all helped. And when Norma left Aberdare in September last year, to start training, there was £200 in the kitty. Another £150 came later.

News arrived from time to time of “our Noma’s” progress. People were pleased when told that she had been selected as one of the five pupils for special tuition by Anne Wood, the contralto.

This week, they were told that next April she we will be back to play a leading part in Trecynon Choral Union’s production of Handel’s “Joshua.” Biggest surprise was that she will appear as a soprano.