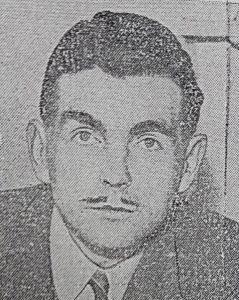 He scorns delight and lives Laborious Days!
By Wynford Jones 12.04.1956

“If you want to find the Eisteddfod Office,” they told me in Aberdare “just follow the postmen.”
I did – to a deceptively shop overlooking the town’s main Victoria Square.

Climbing a narrow staircase behind a bulging sack of mail borne by a sweating servant of the G.P.O. I met the young man to whom thousands of Welsh people from far and near seem to have been addressing letters, parcels, and telephone calls for months past.

Meirion Lewis is a teacher in Aberdare’s Y Comin Primary School, but it is a long time since his pupils saw him in that similar role. In November 1954, he was given two years save of absence and ever since he has been living in a state of fast-moving, if not frantic activity.

For on his shoulders falls the personal responsibility for seeing that everything runs smoothly when something like 150,000 visitors and competitors descended on this small mining town for the National Eisteddfod in August week.

“The general secretary’s work, like a woman’s, is never done,” said Mr. Lewis, ruefully looking at his desk littered with cheques, invoices, bills and letters from America, the Argentine, West Africa, Australia, and a dozen other countries.

Wales’s national festival is big business these days. On the wall of Mr. Lewis’s office is a photograph showing a group of be-whiskered gentry – the leading lights of Aberdare’s last National in 1885.

What would they think, I wonder, could they see some of the other exhibits on the neighbouring walls? One of them is a graph showing the progress of the Eisteddfod Appeal Fund towards the goal of no less than £17,500 which is required to cover all commitments.

Towns from as far away as Resolven has contributed to the present of £12,200 and the graph is still climbing comfortably.

Another poster shows a detailed seating plan of the huge pavilion, already standing ready in Aberdare Park, which will have a steady floating population of some 8,000 people throughout the week.

Plans seem to be the dominant decorative motif in this busy organisation, there are no fewer than 21 of them in the ticket each seat by the week or by the day. Plans for duck-boarding the ground so that even in the event of rain the crowds will not get wet feet…..plans for feeding the multitude…..plans for housing visiting choirs and competitors (five schools have been pressed into service as hostels).

But all these are projects which have long since been worked out down to the last detail.

Now follow a host of minor matters, requiring day-to-day decisions, sufficient to keep Mr. Lewis and his keen staff working as he says, “office hours plus a night shift, Saturdays included,” entries have flowed in. Olwen Morse and Eirlys Prosser – two young schoolteachers on “holiday” – were carefully counting a pile of manuscripts at a long table as Mr. Lewis led me into an adjoining room. “A hundred and ninety-nine, two hundred…” said one, thankfully flicking over the last sheaf.

“All lyrics,” she explained “ready for posting to the adjudicators.”

Beside them was a growing pile of bulky sealed and registered envelopes. These were the entries for the Crown and Chair competitions – just documents carefully entered in a ledger and ready for the post, but somewhere among them were the two long poems, which, may earn for their authors the proud privilege of being publicly honoured in the Eisteddfod’s most splendid ceremonies.

All that, however, lies in the not too distant future. In the meantime, a hundred and one jobs need doing to ensure that there will be no slip-ups in August.

Mr Lewis introduced me to jovial retired schoolmasters who were putting in a busy afternoon packing stack of drama translations inboxes. Next door Bob Evans, a retired income tax man, and Wyndham Bevan, a retired headmaster, showed me the complicated seating plans for concerts, plays, and the Eisteddfod sessions. Downstairs Miss Winnie Evans, another retired teacher, was reassuring two anxious old ladies who had traveled from North Wales to make sure that their accommodation during the big week would be suitable.

These willing workers are all voluntary – only Mr. Lewis and his secretary Miss Shirley Jones, are paid. The job of correlating their different tasks was ironing out any snags which crop up is his.

Then, apart from keeping pace with a steadily-growing pile of desk work, Mr. Lewis’s presence may be required at any of the five or six committees which sometimes sit at the same time in the building.

“My little daughter has almost forgotten I exist,” chuckled Mr. Lewis. “I hardly ever get home for tea, and it’s long past her bedtime before I leave the office.”

The phone rang again, so I decided that I had taken up just about enough of a very busy man’s time. I left wondering about the critics who maintain that a mammoth festival like the present-day Eisteddfod should have a full-time permanent secretary who would travel with it from north to south.

On the face of it, there may be something in the idea.

(But could any professional administrator be expected to devote such time and trouble to the job and to make such willing sacrifices as the man who is driven by pride in his community to make “our” Eisteddfod the best-ever?)