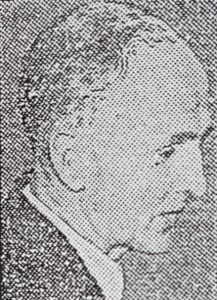 Mr Jones was at one time a science master at Mountain Ash Grammar School and has spent 33 years in S. Africa.

Welshmen, he said were thought of very highly, and the Director of Education for the Transvaal was at present in this country on the look-out for 100 teachers to return with him to the State Transvaal, he went on to say, was a country as big as Great Britain, and had only one director of education.

Mr Jones said that the gold mines in the Transvaal supplied half of the world’s gold. He lived only 15 minutes’ walk from the famous Great Crown mine in Johannesburg.

The Eisteddfod was an annual event in both Johannesburg and Cape Town, and the Dutch also held their own Eisteddfod.

Describing the Kruger National Park in East Transvaal, he said it was larger than Wales, and the home of thousands of animals, including 4,000 lions.

The Welsh people in S. Africa has made efforts during the war years to help their kinsfolk in this country, and £10,000 had been raised and sent home. At his, own school, £2,000 had been collected by 700 pupils and sent to Wales for the benefit of Welsh children who had suffered in the blitz at Cardiff and Swansea. A sum of £1,000 was sent to the directors of education at Cardiff and Swansea.

A vote of thanks to Mr Jones was proposed by the chairman, Mr W.D. Christopher, an old pupil, and seconded by the Rev. J.K. Lloyd-Williams, B.A., B.D.

Afterwards, Mr Jones renewed acquaintance with many of his old pupils.

Mr Jones came to Aberdare from Blaenwaun, West Cardingshire, at the age of five years. He and Wil Ifan (the Archdruid) were boyhood friends. His father worked as a collier at Graig Pit, Aberdare, and when his father was killed Mr Jones, then nine years of age, helped to support a family of five. He was educated at the famous Ysgol a Comin (Park School), the Town National School, the Higher Grade School, Foundry Town, and Aberdare County School, and at the age of 14 under the late Mt. George Jenkins, he was a pupil-teacher ar Tresalem School. He then taught as various schools in Aberdare.

During his honours year, he was a demonstrator in chemistry in the University of Wales, and later he was science master in Mountain Ash County School. His academic qualifications include the B.Sc. (Hons), B.A., B.Econ., and M.Ed. (Exam).

He was a member of Ebenezer Chapel, Trecynon,

He was at a university in France, Mr Jones collapsed and was given a short time to live. At the end of 1914, he went to South Africa, where he had lived ever since. He had held posts on Dale College, King William’s Town; Gwels High School (S. Rhodesia), Gerneston High School, (Transvaal), Commercial High School (Johannesburg), and finally was headmaster of Forest High School, Johannesburg, from which position he retired in 1944.

Mr Jones was also a frequent broadcaster in Welsh for the B.B.C. in South Africa and has also broadcast from Cardiff.

It is interesting to note that the first three headmasters of Forest High School were Welshmen.

Mr Jones is at present staying with his sister Mrs W. Richards, and Mr Richards at 41, Cemetery Road, Aberdare.

An enthusiastic South African Welshman, Mr. Levi David Jones, left Cardiff yesterday for Johannesburg after a stay of 18 months in this country.

He arrived early in 1947 after retiring from the headship of Forest High School, Johannesburg. A great Rugby enthusiast he played an active part in the development of junior football in South Africa, and has made interesting suggestions for the revival of the game in Wales. Whilst “at home” he has toured the country, lecturing to schools and societies.

Welsh are wiser about S. Africa affairs now – thanks to Mr Jones

The people of Wales, from the colliers in the south and to the men of the northern valleys, are a little easier on South African affairs toady.

Mr Jones who, as a guess is about 75 spends his days dreaming and reading in his cosy Park-town flat of the Wales he once knew.

A few days ago thousands of Welsh people saw him on television.

The programme, filmed in Johannesburg was in the Welsh language and, in true Jonesian style (“When I speak to those at home”)

Viewers saw the frail Welshman looking out over Observatory Ridge misquoting a famous hymn: “Where every prospect pleases ….. and only White man is vile.”

“What do self-righteous people all over the world call South Africa? Land of sun, sin, sand, sorrow – and scapegoatism! How easy it is for people 6,000 miles away solve our problems!”

Then Mr Jones told more than a million Welsh viewers exactly what the White man has done in South Africa.

He told them that the Native’s standard of living has risen substantially in the past few decades and is now on a par with that of the Welsh workers at the turn of the century.

“We have the most difficult racial problem in the whole world – but step by step we shall solve it.”

He referred to the Archbishop of Cape Town’s boycott bombshell thus: “It is very sad to see ahead of a section of the English Church wanting to boycott the Dutch Re-formed Churches who have done such a great deal in the missionary field in this land….”

He then appealed to the Welsh to give South Africa it’s “understanding and its prayers.”

The Welshman who has spoken many times on television and radio did not tell his listeners how close he was to Jan Smuts – they used to climb Table Mountain together.

Nor did he tell them of his many friends in both the Nationalist Party and the United Party.

Mr Jones, an ex-headmaster and principal of South Africa’s first Coloured teachers’ training college, came to Johannesburg in 1914 to recover from tuberculosis. He had been given six months to live.

For three years he lived in an army bell tent in what is now Regents Park. “Nature cured me,” he said.

Then he began to make his mark on South Africa.

He popularized Rugby football on the Reef and also taught soccer. Many of the youngsters he trained became Springboks. Some went overseas and made their names there in sport.

His training career nearly came to an end when a younger rugger player asked him: “What position did you play when you played for Wales?”

Mr Jones replied: “I am here to train you – not to answer questions.”

The truth is that Mr Levi D. Jones, the famous Rugby Coach, had never in his life played either rugger or soccer. He learned it all from books!

On Sunday, in a Johannesburg hospital, the death occurred after a short illness of Aberdare born Mr Lefi D. Jones, one of the most outstanding and best-known of Welsh South Africans.

He will be remembered by the many thousands who attended the Aberdare Welsh National Eisteddfod in 1956 as the donor of the Eisteddfod Crown, and as the person who was accorded the honour of welcoming the overseas visitors as the impressive ceremony in the Pavilion on Wednesday afternoon.

The Crown, which went un-awarded because no bard reached the required standard, is now housed in the Aberdare Central Library as a town souvenir of the great week.

Mr Jones, a great rugby enthusiast, was a leading figure in South African schoolboy rugby circles, and very often, when he made one of his frequent visits to his native South Wales, he took part in pre-international and other discussions about rugby in the B.B.C.’s Welsh Home Service – and one winter with the advent of television he became well-known “Sportsview” figure during a stay here which happened to coincide with the visit of the Springboks.

He also wrote to several Welsh newspapers and periodicals about South Africa and South African rugby.

He was a product of Ebenezer Welsh Congregational Church, Trecynon, and less than two months ago he sent a cheque for £100 to that church, asking that the elders there should go responsible on his behalf for presenting it to the organisers of the Urdd Gobaith Cymru (Welsh League of Youth) National Eisteddfod, which was being held in the town during Whitsun week.

Behind the announcement of his death lies the romantic story of a young Welshman’s love of two countries.

In the years before the First World War, when he was a young schoolteacher here at Aberdare (he was later to become a lecturer in chemistry at the University of South Wales and Monmouthshire, Cardiff), Mr Jones was advised to travel to South Africa for health reasons because his doctors could not promise him a long life in his native Wales.

Ultimately he travelled out to Johannesburg and became a prominent educationist and a member of the Johannesburg Cambrian Society.

In 1927, he walked home from Johannesburg to Aberdare, and his journey took him through Central Africa, the Sudan, Egypt and Athens.

After the war, he returned to Wales on several occasions after retiring from his post as headmaster to Forest High School, Johannesburg.