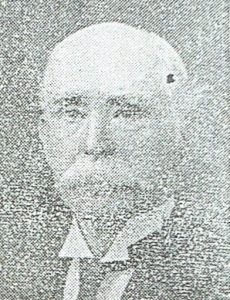 John Davies was born in the district of Aberdare. No Aberdarian was prouder of his native heath and more anxious to put Aberdare “on the map” than Mr. Davies. He was a “full” man in every sense of the word, and his interests were many-sided. A quarter of a century ago he was instrumental if forming a strong Education Society in the town, of which he was secretary, when eminent speakers visited Aberdare.

For nearly 30 years he was attendance officer under the Aberdare Education Committee, during which time he had enjoyed excellent heath. He retired two years ago. Previously he was employed as a miner at various Aberaman Collieries for about 32 years. He was a studious nature and always anxious to advance the public weal. The Aberdare Trades and Labour Council, of which he was one of the pioneers with Messrs. E. Stonelake, J. R. Bruton, John Prowle, the late Stephen Lloyd, and others, found in him a tower of strength, and he became chairman on two occasions. Aberaman Ward elected him as Labour member of the District Council, where he served until the appointment above referred to, passing through the chair of the Education Committee. He and the late Mr. Tom Bowen were made attendance officers at the same time, and when Mr. Bowen passed away a few months ago, Mr. Davies lost an old and loyal colleague, and a genuine friend.

Cymrodorion Aberdar found in him a useful member, and he was chairman of this body a few years ago, and organised entertaining programmes by the juveniles.

He was remembered chiefly, however, as a local historian, and his articles in the “Aberdare Leader” on “Aberdare of Long Ago” were widely read. He commenced writing humorous articles to the Welsh paper “Y Darian” about 30 years ago, and when that paper was taken over by a company and devoted to more serious subjects, he transferred his allegiance to the “Aberdare Leader.” He was a regular contributor to this paper for at least a quarter of a century, and his articles were read with much pleasure and profit. He had an unusual gift of presenting local historical events in an entertaining fashion, and the introduction of “Yr hen bartnar Dai” (Here I Am) was a capital idea.

The letters received by Pen Dar from all parts of the globe, bearing upon his writings in the “Leader,” must have reached hundreds, if not thousands. Older Aberdarians will miss his bright and breezy and humorous references to the Aberdare men and women of long ago.

At one time Mr. Davies entertained a project of writing a book on the history of Aberdare, taking up the thread where the author of “Gardd Aberdar” left off. Owing, however, to labour and expense entailed the proposal was abandoned. But the facts and details published in the columns of the “Leader” from his pen will undoubtedly provide a future historian of Aberdare with ample material for a volume in the same lines as Wilkins’ “History of Merthyr.”

Anniversaries appealed to him very strongly. Had he lived longer, he would have been planning for a suitable celebration of the opening of Aberdare Park and Ysgol Comin, for he had already been making suitable preparations.

It will be remembered how he organised a successful re-union of “Y Cor Mawr” some years ago, when a few the aged members of that famous choir came together in Aberdare. More recently he organised a most happy gathering here when a Pilgrimage was made to Aberdare Cemetery to visit the graves of Alaw Goch, Caradog, Telynog, Dafydd Morganwg and Iago ap Ieuan.

His genius for re-presenting the past glory and glamour of old Aberdare was revealed when he, in conjunction with another well-known local historian Mr. W.W. Price gathered together a large number of portraits, photographs, articles, etc. to form a local museum in connection with Aberdare’s Civic Week. That collection attracted a great deal of attention, and it was visited by thousands of people. 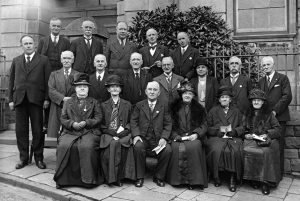 The event was a happy idea on the part of Mr. John Davies “Pen Dar,” who for the past several weeks in his articles in the paper “Aberdare Leader” on “Aberdare of Long Ago,” has been vividly describing the Cor Mawr’s Odyssey of 1873. That “Aberdare of Today” felt this was revealed by the fact that the commodious chapel was filled to overflowing long before the proceedings were due to commence. It was a grandly enthusiastic gathering, presided over very felicitously by Mr. Glen George, J.P. B.A.L., B.Sc., Chairman of the Council, I his capacity as Aberdare’s first citizen.

Though the meeting gave opportunity for some enjoyable musical fare, choirs singing, solos, organ music, and harp, and some interesting speeches and contributions from local bards, the thrill of the evening was the introduction of the twelve veteran choristers individually to the audience.

The photos of local captains of industry and poets were subsequently unveiled at a social gathering, and they hand now at the Education Offices.

Another notable achievement of his fertile and versatile mind was the collection of portraits of old school masters of Park School (Ysgol Comin) over a period of about 80 years. These were unveiled in the presence of a large and interested gathering.

The above represents but a fraction of the beneficent work performed by this ardent Welsh enthusiast, and there is no gainsaying that Aberdare will be much the poorer by his death.

It is our painful duty this week to chronicle the death of Mr. John Davies, of Brook Villa, Llewelyn Street, Trecynon, known all the world over where Aberdarians have made their home, as Pen Dar.

The end came last Friday morning, February 2nd at the age of 74. He had been ill intermittently for the past 15 months. In November 1938, he paid a visit to London to see his children, and he took advantage of the opportunity to witness the Lord Major’s Show. A thick London fog descended which affected Mr Davies’ throat and chest, and he was taken ill there. That seemed to have been the beginning of a troublesome affection which attacked him periodically to the end.

The profoundest sympathy goes out to his widow and to the sons and daughter in the severe blow which has befallen them.

Under weeping grey skies with the tall fir trees bordering the Aberdare Old Cemetery tossing their dark heads in the stormy wind, Pen Dar (Mr John Davies, of Brook Villa, Llewelyn Street, Trecynon), well-known local historian, Labour pioneer, and contributor to “Aberdare Leader” was on Wednesday week laid to rest in the earth of the town he loved so well.

On a gentle grassy slope facing towards the bold line of the Merthyr Mountain he lies near the illustrious old Aberdarians in whom he took such pride and to whose graves he led a pilgrimage of remembrance not so very long ago – Alaw Goch, industrial pioneer, Caradog, Wales’ great choral conductor, Telynog, sweet minstrel, Dafydd Morganwg, felicitous writer, and Iago ap Ieuan, author of “Hen Wlad fy Nhadau.”

Among the wreaths at the graveside were some of bright daffodils, symbolising the ardent Welsh spirit that had always burnt in Pen Dar’s heart.

Notwithstanding the heavy rain, there was a large and representative assembly of old friends, colleagues and admirers to pay an affectionate and reverent last tribute – churches, education authority, political and miner’s movements, Welsh societies, etc., etc., all being represented.

Outside the house the gathering sang the well-known hymn “Mi nesaf atat, et ones.”

At the grave, the hymn “Ar Ian Iorddonen ddofn” was most impressively rendered. The singing was led by Prof. E. T. Edwards (precentor of Gadlys Baptist Chapel).

The deacons of Gadlys Baptist Chapel were the bearers.