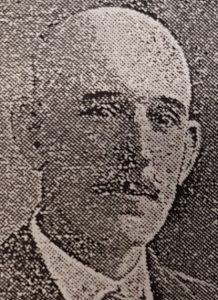 Mr. Evans, who is regarded as one of the best-qualified mining authorities in South Wales, is an Aberdare boy, a product of the famous “Ysgol y Comin” where so many men who have achieved distinction were educated.

His life story is one of natural ability, dogged perseverance, and hard work. While few men have done more in the practical development of various parts of South Wales Coalfield he is also well-known in other walks of life – municipal affairs, mining education, practical Welsh nationalism, including the eisteddfod, and Welsh literature.

After a period of work in the pits, he was in 1884 articled to the late Alderman Rees Llewellyn, mining engineer, Aberdare, father of Sir David Llewellyn, Bart. At 24 years of age Mr. Evans was appointed under-manager of the Gelli No. 2 and No. 3 Pits, and subsequently became under-manager of the Mardy Collieries on the retirement of the late Mr. Griffith Thomas, who daughter, now deceased, he married.

As an illustration of his determination, it may be said that whilst engaged at the Mardy Collieries he used to cross the mountain to Aberdare in the evenings so he could qualify himself at the mining schools at Aberdare.

In 1894 he accepted the position of manager of the Bwllfa Colliery, Aberdare, where he remained for 18 years. In 1912 he accepted the position of an agent at the Albion Collieries, Cilfynydd, and after two and a half years work Mr. Evans had the satisfaction of knowing that the “Albion” had turned the corner, and has since been included among the prosperous properties of South Wales.

When he was then a manager of the Bwllfa Colliery he was awarded the Miner “Victoria Cross” for Lifesaving. One John Isaac, a repairer, was buried beneath about 40 tons of debris, and the efforts of Mr. Evans and his colleagues in rescuing the unfortunate man under most perilous circumstances earned the gratification of the workmen to such an extent that they petitioned the Right Hon. Winston Churchill, then Home Secretary, to honour their manager, a petition which resulted in his being awarded the “King Edward Medal for Heroism.”

He became chairman of the Monmouthshire and South Wales Coalowners’ Association at the annual meeting last March and had been vice-chairman for the previous year. He was one of the oldest members of the association.
Public Work

During his career, he has given a good deal of time to public affairs. He was for many years a member of the Aberdare District Council and was a member of the Pontypridd District Council. He was chairman of the Aberdare Baptist Association, the East Glamorgan Baptist Association, and has taken an active part in promoting the Baptist Sustentation Fund. He was the first secretary of the first Mines Rescue Station in South Wales at Aberaman. He is chairman of the Pontypridd Cymmrodorion, as an adjudicator in literary matters and a lecturer of Ceiriog and other Welsh poets, he has long been well known. Amongst mining students, he is a familiar figure as the classes, and he also as judge in the practical mining competitions.

He was a justice of the peace for the county of Glamorgan and a Member of the Glamorgan County Justices’ advisory Committee. Mr. Evans was hon. president of the Mid-Rhondda Corps, Borough of Rhondda Centre, under the Priory for Wales and was presented with the Lord Baden-Powell Medal for distinguished service to the Boy Scout movement in Mid-Rhondda.

One of his, last public appearances he made was when he presided at the inauguration of a movement in Mid-Rhondda to support the Prince of Wales National Thank-offering Fund. Mr. Evans then said that he had carried out his doctor’s instructions he would not have been present that evening, but he was anxious to show his sympathy with a movement for the benefit of the youth of the nation. Only yesterday he attended the funeral of the late Mr. T. J. Callaghan of Penarth.

Mr. H. H. Evans, chairman of the Monmouthshire and South Wales Coalowners’ Association and general manager of the Cambrian Group of the Welsh Associated Collieries Ltd., died at his Llwynypia home, Old Glyncornel, on Thursday.

Mr. Evans was about to meet Mr. W.M. Llewellyn, of Aberdare, a director of the firm, when he collapsed.

Mr. Llewellyn had entered the grounds and saw Mr. Evans moving along the hall to greet him. When he arrived inside the patio he found Mr. Evans lying on the floor. Dr. Watkins, Tonypandy, was immediately called and arrived 10 minutes later, but Mr. Evans was dead.

His only son is Mr. J. Victor Evans, B.A., an ex-President of the Oxford Union, and one of the most promising young Welshmen of the day.