Mr. Griffith George was a native of Llangoedmor, in Cardiganshire, his parents then removed when he was a young lad to Pontselli, near Newcastle Emlyn, where he was brought up, one of his schoolmates being the Rev. Herber Evans. He was apprenticed in the drapery trade and spent some years in business in London, where he married Miss Rachel Rees, of Castell Gorwyn, Trelech, Carmarthenshire. They had two daughters and a son was born of the marriage, the son, Mr Glendower George, was holding an important position as a mining engineer in India.

Around 1875 Mr. George removed to Aberdare and opened a business as a draper at Trecynon. Then in 1886, he bought the Beehive drapery establishment in Victoria Square, Aberdare, which he then owned until he finally retired from business.

He was a fluent writer of poetry both in the vernacular and in English, and a frequent contributor to the Welsh periodicals. In a competition at the Aberdare National Eisteddfod for a prize £50 offered by the Marquis of Bute for a translation of the “Alcestis” of Euripides, his translation was the second best. At the Pontypridd Eisteddfod, he won the prize for a translation into English verse of the awdl on “Elusengarwch” by Dewi Wyn o Eifion. Four years ago, he published a volume of poems which contains a few Welsh compositions.

After the death of his first wife, he married Mrs Davies, widow of Mr Rees Davies, timber merchant, Swansea, and subsequently Miss Clara Hodges, daughter of Mr William Hodges, Aberdare. He became a deacon of the Baptist Church at Heolyfelin, Trecynon, Aberdare, while on the voyage out to Tenerife he composed a hymn, which was being rehearsed by the Baptist choirs in Aberdare for their forthcoming annual singing festival.
The news was received by cablegram at Aberdare, that Griffith George (Gruffydd Dyfed), J.P., of The Laurels, Aberdare, had died passed away in Tenerife he had gone a few weeks ago for the benefit of his health, accompanied by his wife. He died in Tenerife, February 16th, 1910, when out there on the orders of his doctor, and he was buried there.

A singing festival was held on Monday by Heolyfelin Baptist Church. The morning meeting was devoted to the juveniles, the conductor being Mr. W. Jenkins (Meirionydd). Mr. Gwilym. Rees occupied the chair, in addition to the hymn tunes, the anthem, “A oes canu yn y nefoedd,” was finely rendered by the choir.

The adult festival was held in the afternoon and evening, the conductor being Mr J. J. Phillips, A.C. In the absence of Councillor M. J. Harris, the chair at the afternoon meeting was occupied by Mr John Austin. The pastor, Rev. Cynog Williams, presided in the evening. The chorus, “Thanks be to God,” was among the items on the program, and the hymn, “Gorphwysfa,” composed by the late Mr. Griffith George, J.P., was also sung. 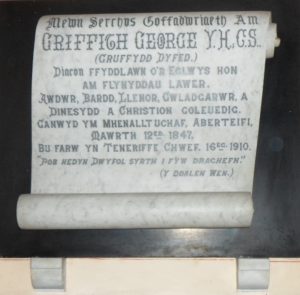