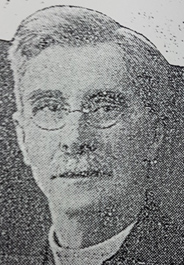 The Rev. W.S. Jones, of Jerusalem Welsh Baptist Church, Llwynypia, one of the leaders of the denomination in Wales and founder of the great revival of 1905, died at his home on Friday.

The facts which led to the disclosures of the circumstances which brought about the great revival were first made public by the late Rev. R. B. Jones, of Porth, at a convention in London in 1930.

The Rev. R.B. Jones then revealed that the beginnings of the revival were in the U.S.A., where the Rev. W.S. Jones was for some years’ pastor of the Baptist Church at Scranton.

He returned to this country in 1897 and became pastor of Penuel, Carmarthen.

The effect of the Rev. W.S. Jones’s preaching was remarkable, and a band of ministers became interested and sought the advice of the Rev. G.B. Mayers. He advised them to attend a convention at Llandrindod Wells in 1903 under the auspices of Keswick Convention.

This band of ministers did so, and under the guidance of the Rev. W.S. Jones conventions were held under the spirit of the new revival in Carmarthen and Cardiganshire. It was at one of these that Evan Roberts was “brought into the blessing.”

Native of Rhymney, Mr. Jones was one of five children, the three sons all becoming ministers. The late Rev. J.S. Jones, Pembrokeshire, was his brother.

In 1885 he was ordained, and became pastor of Capel Rhondda Hopkinstown, where he remained year. Then followed a five years’ pastorate at the Memorial Church, Swansea. In 1892 he went to America. It was once said that if a letter was addressed to him from America, with merely the inscription “W.S.” Wales, he was so widely known that he would have safely received it.

In 1929 he was chairman of the East Glamorgan Baptist Association.

Since the death of his colleague, the Rev. R.B. Jones, he had acted as principal of the South Wales Bible Training Institute.