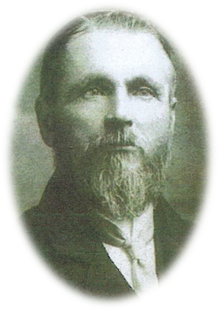 David Davies was born in a cottage on Bodwigiad Estate in August 1853, he was the son of David Davies, Llanwenog, Ceredigion, and Jennet Davies, daughter of William Harry, Pencae Farm, being one of 11 children, six boys and five girls.

In his youth, singing was his principal delight. Gifted as a vocalist, he persevered in his studies, and began conducting congregational singing at Siloam Church at the age of 17 years, entering the competitive sphere when but 22 afterwards gaining many successes in eisteddfodic literary and singing competitions.

As the conductor of mixed choirs, he was the winner of five premier awards, and his quartet won many successes. Under his expert leadership, cantatas composed by Pencerdd Maelor, were performed in the district viz., “Christiana” in 1891: “Y Tymhorau” in 1892 and “Mordaith Bywyd” in 1893. Throughout the years, he gave loyal service to his church and denomination.

In 1876 when only 23 years of age, he conducted the united Baptist singing festival held by the churches of Resolven, Glyn-Neath, and Penderyn. Forty years later, he was chosen to conduct the singing festival of Hirwaun and Penderyn Baptist Churches. Music and singing were all in the life to him, and when he wanted to attend musical events, distance was no object.

His success as an essayist was considerable, particularly when he wrote about the hamlets of Penderyn, Rhigos and Ystradfellte. He was proud of his literary effort on “Thomas Llewelyn, Rhigos,” which he entered at Pontneathvaughan in 1904, when the Vicar of Aberpergwm, who adjudicated divided the prize between him and Gwilym Alaw, Rhigos.

The funeral of Penderyn’s “Grand Old Man.” Mr David Davies (Dewi Cynon) of the Post Office, Penderyn, took place on Saturday to Siloam Baptist Church Cemetery, when there was a large attendance, including bards, musicians and eisteddfodwyr, who paid and impressive last tribute to an author and musician.

Siloa church was crowded for the memorial service. The pastor said that the passing of Dewi Cynon was a very great loss to the church and to the Baptist denomination generally.

He was imbued with a lofty Christian standard and regard for truth and the Word of God. He was a patriarch who had a powerful influence on the spiritual welfare of the village.

“We venerate the memory of Dewi Cynon,” emphasised the Rev Gwilym Owen, a son of the village and a product of Siloa Church. Dewi Cynon was a most memorable character and personality, as a man affectionate helpful and kindly. The true secret of his success was deeper than any natural endowments. 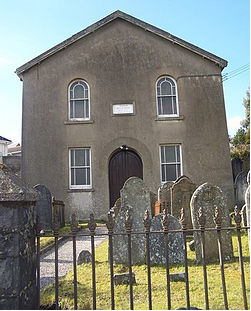 With his passing the district loses one whose whole life was of wide and useful purpose. A roadman under the employ of Breconshire County Council, sub-post master precentor of Siloa (W.B.) Church, and a poet of eisteddfodic renown, he was best known as the author of the interesting hand-book entitled “Hanes Plwyf Penderyn,” “History of Penderyn Parish.” Over 80 copies of the first edition published on May 2 1905, were sold and a second edition was published on February 9, 1924, which again found a ready sale.

Dewi Cynon leaves a fragrant memory, and Siloa Church mourns a true disciple and a pillar of the church, while villagers in general will deplore the passing of a dearly loved friend, counsellor and neighbour.

Much sympathy is expressed with the sorrowing relatives and the Aberdare Leader joins in paying a tribute to one who was a frequent contributor to its columns.

Interment (gentlemen only) takes place at Siloam (B.) Churchyard, Penderyn at 3 p.m. on Saturday.

Mr. David Davies (Dewi Cynon), Penderyn, received the news some time ago of the death of his son. John Haydn Davies, in Tongoa, one of the South Sea Islands, where he was engaged as a cocoa plantation manager to Messrs. Kerr and Co., Sydney. At the time it was stated that the cause of his death was the bursting of a blood vessel, brought about by over-exertion in walking in the heat of the sun.

Now the news has been communicated to the father that the young man was murdered by natives. He left his home in Tongoa for the Isle of Epi, 15 miles away, in search of more workers. He was accompanied by two native boys. Next day he crossed the island on foot. In the after- noon the boys returned, and reported that “the white man” had been killed. A terrible wound, on the back of the head proved that death was the result of a heavy blow. His wife, to whom he was married in December, 1911, and who was previously a nurse in Sydney, is confident that her husband was treacherously murdered by natives, and she is having the matter investigated. Mr. Davies was well known in Penderyn and the neighbourhood. He was a young man of considerable musical and literary abilities.