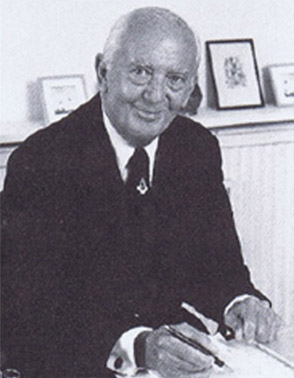 He was born Herbert Edmund Davies on the 15th July 1906, the third son of his parents. Edmund Davies’s education was largely financed by scholarships. His advantages lay only in a strong Welsh Nonconformist family background coupled with remarkable intellectual ability, great industry and a wholly legitimate ambition.

His parents sent him to Mountain Ash Grammar School. He then went to King’s College, London, where his great abilities were soon recognised. He successively acquired an LLB with first class honours, a postgraduate research scholarship and an LLD. He then read for a BCL at Exeter College, Oxford. There he became a pupil of Geoffrey Cheshire, the law fellow and bursar of Exeter, author of a number of well-known books and the father of Leonard Cheshire.

Throughout his career, until his appointment as a Lord of Appeal in Ordinary in 1974, he was known as Edmund Davies. This distinguished him from his contemporary and friend Arthian Davies. When required to take a title he added another ‘Edmund’ to his surname, thus acquiring the hyphenated surname by which he was known for the remainder of his life.

This led to a long connection with the future Lord Cheshire and the Cheshire Homes. Davies won first class honours with his BCL and also the Vinerian scholarship. Cheshire always regarded him as his star pupil and strongly encouraged him to go to the Bar rather than pursue an academic career for which he could hardly have been better qualified.

Though already married, and with a family he had joined the Army Officers Emergency Reserve at the time of Munich and shortly after the outbreak of war was commissioned into the Royal Welch Fusiliers with whom he remained until sent to the Judge Advocate Generals Department. There he continued to work until the end of the war. He was however able to keep in touch with his circuit through his successive tenure during the latter war years of the recorder ships of Merthyr Tydfil and Swansea.

In 1943, the Lord Chancellor, Lord Simon, granted silk to some of those who but for their war service would by then have been ready to receive it. Davies was among that number. At the end of the war he thus returned to the bar as a leader and his reputation grew rapidly in Wales. His successful conduct of the defence in the once notorious ‘weed killer’ murder trial in 1952 achieved considerable fame and he won other trials. In the same year he was appointed Recorder of Cardiff, the main recorder-ship on his circuit.

It came as no surprise to the profession when in 1958 the Lord Chancellor, Lord Kilmuir appointed him to the High Court bench. Davies’s name almost immediately attracted wider public attention when it fell to him to try a German named Podola. Podola had shot and killed a police sergeant. He was later hanged. But still wider fame awaited him. In 1964 he was sent to Aylesbury to try the notorious Great Train Robbery case. The severity of the sentences he passed became and has remained controversial. He and later the Court of Criminal Appeal had no doubt that the sentences were well justified not only as retribution and as a deterrent but also to ensure that the huge gains won by violence should not be enjoyed by those who had perpetrated such violence, especially the brutal attack upon the driver of the train.

In 1966 the former Court of Criminal Appeal was replaced by the new Court of Appeal Criminal Division. This necessitated the appointment of additional Lord Justices. It was no surprise that with the reputation already gained as a trial judge especially in criminal cases; Davies was among the new appointments. It was hoped that he could shoulder some of the burden then being carried by the Lord Chief Justice Lord Parker.

But hardly had his appointment been announced when the Aberfan disaster took place. An inquiry was immediately demanded. Davies was chosen as chairman. A Welshman was to enquire into a Welsh disaster.
His strong emotions for behind his apparent self-control he was an emotional man sometimes spilled over both during the lengthy hearing and in the wording of his report. His condemnation of the National Coal Board was complete and unqualified.Nine named officials of the board were blamed individually and the report was particularly scathing about the behaviour of the board and its chairman, Lord Robens. Yet despite the damning report, nobody was prosecuted, dismissed or even demoted.

His appointment to the House of Lords in 1974 came as a great relief, soon after he was again pressed to leave judicial work in order to chair the Police Inquiry which was especially concerned with the problems of police pay. The report is always associated with his name and is still often referred to in present controversies on similar topics. His recommendations for pay rises were accepted not without reluctance by the government and the Treasury. Through much of this period he was a member of the Criminal Law Revision Committee, many of whose proposed reforms were adopted.

His family, his wife, his daughters and their children came first in his devotion. But Wales and everything Welsh were also a source of devotion. For 11 years he was pro-Chancellor of the University of Wales. In addition he was a Life Governor and Fellow of King’s College, London, and an honorary fellow of Exeter College, Oxford. He was treasurer of Gray’s Inn in 1965. To all these institutions he always acknowledged his debt. Until his health failed he continued to live in Gray’s Inn but ultimately moved to a home near the care of one of his daughters and her husband.