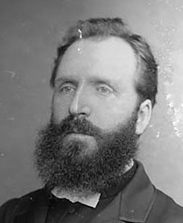 The “South Wales News” regrets to announce that the Rev. J. Cadvan Davies (Cadvan), the ex-Archdruid of Wales, and a former president of the Welsh Wesleyan Methodist Assembly, passed away at his home as Oswestry yesterday aged 77. He retired from his active ministerial duties several years ago, though he occasionally occupied the pulpit at as Oswestry, where he lived in retirement.

Born in Llangadfan, in Montgomeryshire in 1846, Cadvan was destined for the Welsh Wesleyan ministry, and commenced to teach at an early age. His first circuit was at Penygroes, and he afterwards served with distinction and acceptance the principal and most difficult circuits in Wales. He was president of the Welsh Wesleyan Methodist Assembly in 1910, and represented Welsh Methodism at the Toronto Conference the following year.

His first Eisteddfodic success was in 1867, and since then with the possible exception of the late Dyfed “Rev. Evan Rees,” probably carried off more eisteddfodic prizes than any of his contemporaries. He won no fewer than sixteen chairs at various provincial eisteddfodau, and was the crowned bard of the National Eisteddfod for three consecutive years. He never competed for the National Chair, but won medals at all kinds of eisteddfodau, and so proud was he of these achievements that his was his custom for years to appear with them at all Gorseddic and Eisteddfodic functions, not for vanity, but as a sense of duty, feeling that he ought to display the honours conferred upon him by the Eisteddfod and not hide them.

Cadvan composed many epic poems his “Madawg and Owain Gwynedd,” his “Cystenyn Fawr,” and his “John Penri” are masterpieces. For the latter he received a prize of £40, a gold crown, and gold medal, and he was invested by King Edward VII, then the Prince of Wales.

Cadvan, however, was at his best dealing homely subjects, such as “My Mother.” He was also happy in the company of Nature, always bright, cheerful hopeful.

Cadvan was second to none in his zeal for active efforts to maintain the rights and dignity of his order. On several occasions he deputised the late Archdruid, and he conducted and adjudicated at eisteddfodau innumerable. Despite his great age he had a deep melodious voice, which could be as easily heard by 20,000 as by 200 persons, and that without any strained effort.

Cadvan, the new Archdruid, have been for years the most commanding figure in the circle of Gorsedd bards. His first eisteddfodic success was in in 1867, before many of the present day bards were born, and since then he has carried off more eisteddfodic prizes than most members of the circle. His strength lies in the composition of epic poetry, and his trophies number three national and one provincial crown. He has never competed for the chair at the National Eisteddfod but he has won sixteen provincial chairs and numerous medals. He makes a point of wearing them at all Gorseddic functions, not from vanity, but from a sense of duty, feeling that he ought to display and not hide, the honours conferred upon him by the Eisteddfod. He is a well-known and popular lecturer, won £50 at a single delivery, and Cadvan generously handed over the whole sum to a poor quarryman who had been injured in the locality that day. 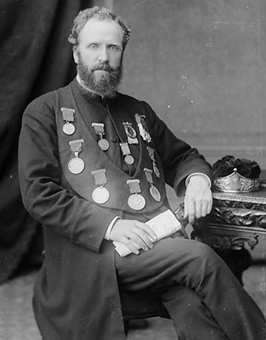 Cadvan wearing some of his medals

Cadvan represents the National Eisteddfod, the pulpit, and true poetry, and it is not easy to determine in which sphere he has most excelled. The late and immortal John Evans, Eglwysbach, testified a little previous to his death that “in my opinion Cadvan is the greatest poet-preacher of the age.” As a poet he has given his country the true song, the inspiration of the divine without one offensive note. His deep, melodious voice can be heard by twenty thousand as by two hundred, and without any strained effort, and whether he sings the old restricted metres of his beloved Gwalia, or charms with his logical powers, we find only the purest and choicest thoughts interpreted by a perfect selection of words.

As a conductor of the great meetings he stands alone, having conducted more national eisteddfodau than anyone now living. His commanding presence, his great rich voice, and fine character have made him a conductor par excellence Cadvan was the youngest of four children. His grandfather and grandmother were among the first followers of John Wesley at Llangadwen, and his father and mother David and Jane Davies were also followers of the Great Divine, and brought up their children in the strict puritanical way common to the Welsh people of that time. It was in 1867, when 21 years of age, that the new Archdruid found his life’s work. He began to preach in his home circuit, and his eloquence was so attractive, as well as powerful that he became at once a most acceptable preacher. He began his public career as a poet in 1867, when he won the prize at an eisteddfod for a poem. At the London Eisteddfod in 1887 he won the gold crown for an epic poem on “John Penny,” the Nonconformist martyr, and the crown was accompanied by a gold medal which the successful poet received from the hand of King Edward, then the Prince of Wales.

On the death of Dyfed in the early part of the year Cadvan succeeded to the Archdruidship, but owing to his advanced age and fragile state of health he relinquished the post at the Mold Eisteddfod and was succeeded by Elfed.

Cadvan published four books of poetry, which enjoyed a wide circulation. He also wrote many articles to the Welsh magazines. As an adjudicator he was, when in his prime, in constant request; and since the days of Mynyddog there were few Eisteddfod conductors as successful and popular as Cadvan. He did much to popularise the Eisteddfod and to purify it.

He had been a member of the Welsh University Court, was on the committee that formed the Pan-Celtic Congress, and represented the Gorsedd and Nonconformity at the Investiture of the Prince of Wale at Carnarvon.

The funeral will take place at Oswestry at two o’clock on Monday, and his remains will be laid to rest in Oswestry Cemetery. A large attendance of bards is expected, and the burial will be accompanied by full Gorsedd honours. A funeral service will first be held in the Welsh Wesleyan Church, Oswestry.