On Wednesday evening last, the workmen and over-men of Ysguborwen works, joined by a large number of friends, attended at the British School to present Mr. Herbert Kirkhouse with a testimonial and an address on the occasion of his leaving those works for the Bwllfa.
The room was crowded almost to suffocation, and among the gentlemen on the platform were the Rev. Hugh Hughes (Tegai), Messrs’ Jenkin Rhys, W. Davies, surgeon James James, Gadlys works; David C Evans, Lletty Rhys John Williams, London Warehouse; and. D. Williams, Merthyr.

Mr. Benjamin Morgan, contractor, Ysguborwen, presided with great efficiency over the meeting, and opened the proceedings in a forcible speech. In the course of his remarks he spoke of Mr Kirkhouse’s good qualities as an agent and a man, representing him to be in both respects worthy of any testimonial they could offer him. He (Mr Kirkhouse) was invariably strict but fair in his dealings with the workmen under him he secured their confidence in all matters, and keen watched the interests of his employer at the same as me.

The choir Welsh Unitarian chapel was present, and this stage sang a lively air.
Mr George Edwards, one of the overmen at Ysguborwen, next addressed the meeting. He spoke in eulogistic terms of Mr. Kirkhouse’s good qualities, urging that he was an upright, energetic agent, and yet a man who had earned the love of all the workmen in his employment “Mr. Kirkhouse,” said the speaker, treats, his men like freemen, and not, as was the case in some places, as though they were slaves he was hard upon them oftentimes, but, from the straightforward an honest manner in which he treated them, he invariably won their respect and love.”

After a tune from the choir, the Rev. Hugh Hughes (Tegai) read some complimentary verses, the author of which was not in the room? Mr. John Wilson afterwards recited some lines in favour of Mr. Kirkhouse the choir again sang: and. the chairman then called upon Mr. Evan Jones, gas office, to read the address, which he (the reader) had got up in one evening in a splendidly artistic style. The address contained expressions of praise for Mr. Kirkhouse, and regret that he should leaving Ysguborwen. It was read amid general and hearty applause, and afterwards handed to Mr. Kirkhouse. The watch, a magnificent gold lever (worth 30 guineas), to which was attached a massive chain, both of which were supplied by Mr. J. D. Williams, Merthyr, was afterwards formally handed to Mr. Kirkhouse by Mr. Hugh Powell, who accompanied the act of presentation with a few suitable remarks. After repeated rounds of applause, Mr. Kirkhouse rose to thank the donors for their complimentary address, n d the handsome present by which it was accompanied. He was evidently much moved by tie kindness showed him, and said Mr. Chairman, ladies and gentleman. You have placed me in a very awkward position by your great kindness, for I am quite unable to express myself on this occasion. I am very proud to receive such a testimony of your good will, ant shall always feel grateful for your kindness, which has quite overpowered me. I can only regret that I am unable sufficiently to express my gratitude, and I beg you will excuse me and accept my best thanks.

Mr. James, Isycoed, next addressed the meeting in a speech of considerable length and ability. He had known Mr. Kirkhouse for many years; he was no stranger to any of them, for he was born in Merthyr. He was man who had fought hard for his knowledge, and he was now making good use of it. In the course of his (Mr. James’s) experience he had observed that employees failed chiefly for three reasons the incompetence, dishonesty, or the idleness of their agents. It was certain that neither of these charges could be-laid against Mr. Kirkhouse, and they must all respect him accordingly Mr. James concluded a very telling address.

The choir having sung, Mr. John Williams, London Warehouse, addressed the audience in a humourous speech, the course of which he eulogised the penmanship of Mr. Evan Jones, the gentleman who had written the address,, in unmeasured terms. He (the speaker) felt sure, if Mr. Jones were in London his talents wild be highly appreciated they ought to be proud that they had such a man in the town, and more especially he was a Welshman. Mr. Williams spoke in terms warm praise of Mr. Kirkhouse, who, he characterised as a kind-hearted man, and. a candid and honest man.

Mr. D. Isaac Davies said he felt happy at being present hat meeting. He had felt great pleasure in giving tut the loan of the school-room, and he only wished Kirkhouse had stayed a little longer at Ysguborwen when they might have accommodated the meeting much better in their new buildings. He had had ample opportunities of learning Mr. Kirkhouse’s characters for his duties brought him in contact with people who knew him well. He had always heard him well spoke of. He entirely concurred in the whole of what had seen said of Mr. Kirkhouse that evening.

The Rev Hugh Hughes, (Tegai), was the next speaker, and his remarks were both forcible and pertinent.

Votes of thanks were afterwards unanimously awarded the chain, to Mr. Davies tor the room, to the ladies for having decorated the same, and to the choir, whose presence much enlivened the proceedings, which were throughout of a most hearty character.

On Saturday morning at Penyradwy, Pontsticill, Mr H Kirkhouse, a well-known coal pioneer, passed away at the age of 72 years. Mr Kirkhouse had for some time been treated for an internal complaint by his medical attendants. On Monday week he was visited by Dr Evan Jones, Aberdare, one of his oldest and most intimate friends. Mr Kirkhouse retained his consciousness until the end, which took place in the presence of his family and some intimate friends.

We cull the following from an appreciation of Mr Kirkhouse which appeared in the “South Wales Daily News:”Herbert Kirkhouse, after passing through that stern mining school which exacts the learning of lessons in hard-working physical labour, as much as in mental exercise, drifted away from Cyfarthfa, and became first mining engineer at Hirwain under Mr Francis Crawshay. Here he continued until the stoppage of the works, after which his services were secured by several of the pioneers of the Aberdare Valley, principally by Mr Samuel Thomas, of Ysguborwen, with whom and Mr T. Joseph he was associated then with Mr D. Williams (Alaw Goch), Ynyscynon, father of Judge Williams, and in addition, his abilities, were of especial value to the owners of the Bwllfa. It may, with justice, be said that he did valuable service in opening out the Valley of Aberdare, and was one of the prominent agents in adapting the great field which had been so long a battle scene between Welsh and the Normans, to the service and maintenance of the still greater army of collier labour. By such as our engineer the waste which had been a wild tract of ferns and rushes, with a scant meadow here and there, was covered with habitations, and schools and chapels arose as indications of busy and happy communities.

From Aberdare Valley to the Rhondda, as that district began to be worked was the next step and here again he did yeoman work, now in one field of action then in another. Throughout all his life of enterprise he was not a solitary unit, working simply for the attainment of ambitious dreams but casting his lot in with the mining brethren and with coal-owners, assisting in their deliberations, taking part in their speculations and administrations, and with a fearlessness which is inseparable from his class, giving his best aid in explosions either for rescue of sufferers or for the gleaning of lessons for prudential exercise in the future.

He was associated for a time in the proprietary of Tylorstown Collieries, and the results of his experience of disaster was the invention of the “harbour of refuge,” which, designed to save life that had escaped the first burst of explosion, may yet someday become from an interesting theological suggestion, a valuable saviour of life. To him the credit of being one of the first to advocate the spraying of dry mines with water, to lessen the power of an explosion, is undoubtedly due. He, and Mr Henry W. Lewis, brother of Sir W. T. Lewis, patented a tram with that object in view, which was first turned out at Treherbert Foundry. 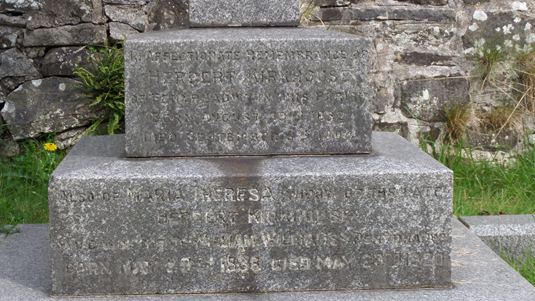 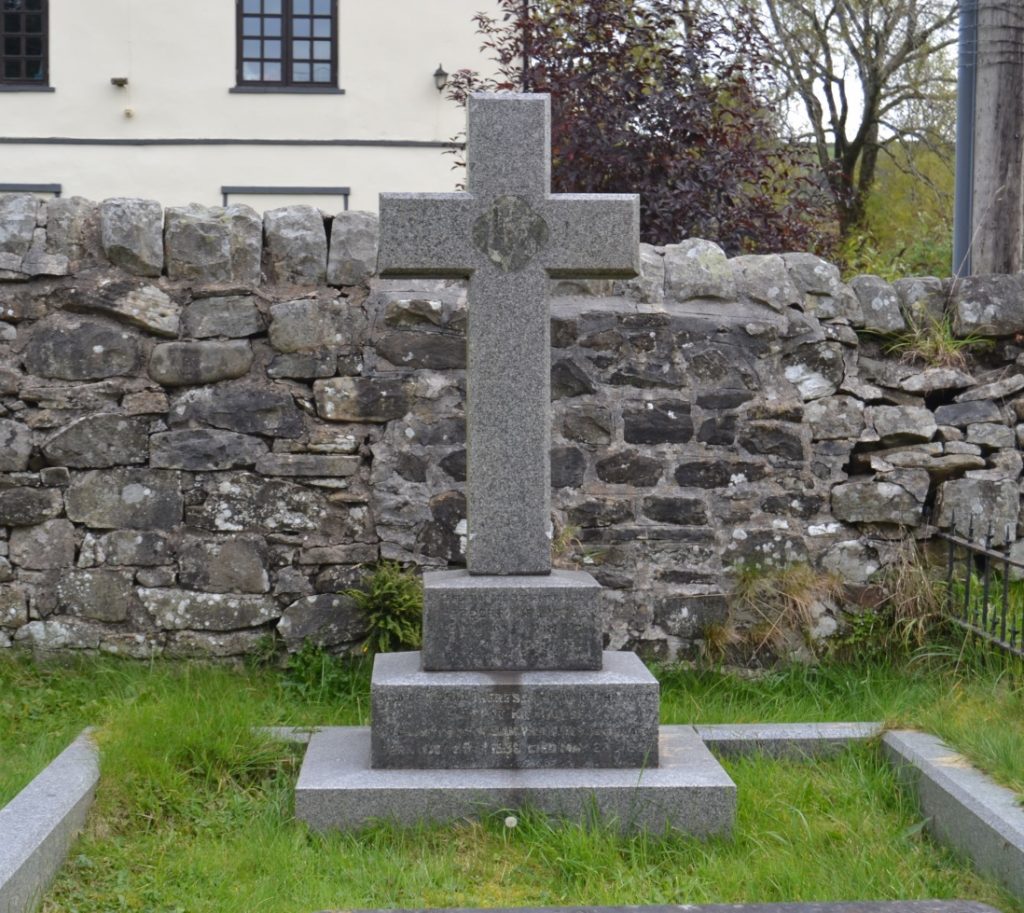 In the church the service was conducted by the Rev. R. W. Lloyd and the Rev J.T Rees Taffvechan.

The organist played “Dead March” in Saul whilst the mourners slowly moved out of the sacred edifice, and the closing portion of service was rendered by the Rev Gwilym R. Jenkins, curate of Brynmawr, the Rector of Vaynor, and the Rev D. Hughes Picton, curate. The vault situated in the north-east corner of the churchyard, Vaynor, occupies a site which had been selected by the deceased. A muffled peal was rung on the bells at the Parish Church, Merthyr. One of the bells, all of which were presented by Old Merthyr Boys, was given; it will be re-collected, by Mr. Kirkhouse.

Mr. Herbert Kirkhouse, of Hazelwood, Penyrhadwy, Vaynor, J.P., and of Cathedral Road, Cardiff, mining engineer, the founder of Tylorstown, a director of the Rhymney and Aber Valleys Gas and Water Company, who died on the 3rd September last, aged 72 years, left estate valued at £54,989 1s 8d. gross and £54,552 10s 1d. net, and by his will of the 29th August, 1904, he confirmed the settlements made on his marriage, and bequeathed to his brother, the Rev. Howell Kirkhouse, of Cyfarthfa, as executor, £100, and in reversion £300, and to his niece, Annie Mary Williams, an executrix, £100, and in reversion £1,000, and a reversionary annuity of £100. To his sons Leolin William and Frank Herbert Kirkhouse, £100 a year each during the widowhood of their mother, and to his brother-in-law, the Rev. Charles Chidlow, an executor, £100, to the testator’s sister, Jane Chidlow, and her daughter Enid, £100 each, to his sister Catherine £150 and a life annuity of £15, to his sister Barbara, £100, to his niece Barbara Mary in reversion £300, and to his niece Catherine, daughter of his brother Henry, in reversion £150, to the daughters of his sister, the late Ann Morris, t£100 each, and to her sons £25 each, to his sister Winifred Bowen £100, and to her children £25 each, to the children of his brother George £25 each, to Mr. Walter Powell Nicholas, of Pontypridd, solicitor, as executor, £100, and Mr. Kirkhouse bequeathed to his wife, Mrs. Maria Theresa Kirkhouse, of Hazelwood, his household effects, and the income during her widowhood of the residue of his property, which, subject to her in to rest, he left in trust for his sons Leolin and Frank.