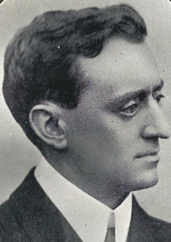 A great figure in Choral History

Harry Evans was born on May 1st 1873 in Russell Street, Dowlais he was the fifth child of ten. His father was John Evans (Eos Myrddin), one of those who, in the sixties and seventies, made grimy Dowlais famous as an abode of song, a man of no formal education, but of great natural mental ability; one of the old school, who would appear in the leather clothes of the steel worker before the singing class, snatching a brief interval from his work at the furnace in order to coach his fellow-workers in the art of music. Tonic sol-fa Mr. Evans learned from his eldest sister, his father teaching him the staff notation. By the age of five, he was able to play hymn-tunes on the harmonium. At the tender age of seven Harry Evans made his first appearance in public as a soloist on a small harmonium, at a penny reading.

The youthful artiste (he could scarcely blow the instrument) was the proud recipient of 5/- in coppers, the proceeds of a collection made from the delighted audience.

Another three years saw him organist at Gwernllwyn Congregational Church, a special blowing apparatus having to be installed on the Alexander Harmonium which constituted the organ. In lieu of salary, the members of the church paid for pianoforte lessons for the boy. The musical fare provided by the teacher of the prodigy: Mr. Lawrence, a pupil of Moscheles, of Leipzig, was of the hardest, Mendelssohn’s “Songs Without Words” being the easiest composition which the boy was called upon to play. The late Mr. Woodman, sometime headmaster of the Gellifaelog Schools, once told the story of how young Evans, “a serious boy, absorbed in his music,” used to often practise on the school house piano. The lad at this time had no piano in his own home, till the members of his chapel arranged a concert for the purpose of providing him with an instrument.

About this time he passed with honours the Local Examination held by the Royal Academy of Music (now the Associated Board). Mr. Evans, senior, inspired with sound common sense, insisted upon his son receiving a good general education in addition to his musical training. Though music was his ruling passion, the lad entered for a scholarship at the Higher Grade School, which he won. His father further insisted on his boy entering the teaching profession, as a secure means of livelihood. “After that,” he said, you can do as you like about taking up music.” Meanwhile, friends clamoured that the boy should be allowed to take up a purely musical career.

The father, however, remained obdurate, the result being that Master Evans was apprenticed as a pupil teacher in the Abermorlais Schools. The wide range of his abilities will be seen from the fact that although his time was largely taken up with learning and teaching music, he headed the district in the Queen’s Scholarship Examination list, his name standing 88th on the list for the whole Kingdom.

In addition, he passed the South Kensington Examinations in Mathematics, Science and Art. But for the advice of a medical friend. Mr. Evans might have continued a distinguished scholastic career at Bangor Normal Training College, and the musical world would have sustained a considerable loss. This friend advised the adoption of a musical career, the result being that Mr. Evans, after a year’s hard and secret study, passed the examination for the Associateship of the Royal College of Organists, held at London in 1893. Teaching was now abandoned and the young musician appeared more frequently than ever at organ recitals and as pianoforte accompanist to the numerous choirs in the neighbourhood.

In 1893 Harry earned the praise of the press when he became accompanist to the Dowlais Choral Society. This was a group that set great store on winning competitions. Pressure was put on Harry to form a new group, the Dowlais Harmonic. In September 1893, the choir changed its name to Dowlais Philharmonic, and in December, Harry had his first experience of large scale conducting when he led a choir of 200 voices in a performance of Handel’s Samson, with full orchestra. He devoted his next few years to choral competitions, and in 1897 took the chief prize of100 in Tonypandy. In 1899 Harry formed a male voice choir of about 100 men, specifically to compete in the Eisteddfod to be held in Liverpool in 1900. For a year, preparation for the Liverpool Eisteddfod took precedence over all other activities, for much meticulous work had to be done.

The sixth annual eisteddfod in aid of a cottage hospital was held on Monday in a spacious marquee erected in a field off Coity Road, Bridgend, when there was an enormous attendance. The chair was occupied by Mr. S. H. Stockwood, of Bridgend. The adjudicators were: Music, Messrs. John Thomas, R. C. Jenkins, R.A.M., and (for the preliminary contests) Mr. D. Thomas, F.T.S.C.; literature, Mr. E. Cadifor Samuel, Llanelly. Mr. Tom John, Llwynypia, acted as conductor. The accompanists were Mr. Harry Evans, Dowlais: preliminary, Mr. J. P. M’Gaul, Bridgend.

The amateur vocalists of South Wales may congratulate themselves that their cause has been vindicated by the highest authority in the land. The winning choir was accompanied by Mr Harry Evans, the accompanist of the late Dowlais Harmonic Society.

Mr Harry Evans, the accompanist of the victorious Rhymney Choir, is generally regarded as one of Cymru’s coming men. He is the son of Mr John Evans (Eos Myrddin), the veteran choir leader at Dowlais, and when quite an infant he showed a musical bent which has clung to him ever since. A fortnight ago he passed the examination for an associateship of the College of Organists, being one of the very few Welshmen who have ever gained that distinction. In the recent examination only three or four candidates who had not previously attempted it were successful, and Mr Evans was one of them. He was until its desertion the accompanist of the Dowlais Harmonic Society, and is looked upon as the coming conductor of the old invincibles.

Mr. Harry Evans, the conductor of the new Dowlais Philharmonic Society, is regarded by his friends as one of Cambria’s “coming men.” The son of “Eos Myrddin,” a veteran choir leader and eisteddfodwr, Mr. Harry Evans has, so to speak, been nurtured in the lap of music. He has passed no end of examinations, and month or two ago surprised those who knew him by gaining an associateship of the College of Organists, he being one of the very few Welshmen who have ever gained that distinction. Although Mr. Evans is only twenty years of age, he has been an eisteddfod accompanist for many years, and his services are daily being sought after by choirs i