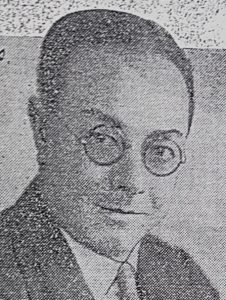 Where are the Welsh comedians? The question was asked once again a few days ago by a writer in the “South Wales Echo.”

Well, where are they? It is not so difficult to explain the failure of the Welsh people to establish their particular variety of national humour in the world’s consciousness.

The Scot has had the advantage of sundry legends – Aberdonian parsimoniousness, the sporran, the haggis, the kilt – and of the genius of Burns, Barrie, and Lauder.

The Irishman and the Jew have had the tremendous “pull” given them by their power in the life of America, the nation of press agents.

The ignorance of the Welsh character prevailing in most English homes, and the non-appearance of a Welsh humourist of genius, whether on the creative or on the interpretative side, have militated against us.

Briefly, it is true to say that the average non-Welshman has no idea at all as to what Welsh humour is. Dai Lossin has always appealed to me as one of the richest characters ever created by any humourist, but he was not for the world, for to get any pleasure from his antics you had to know at least something of Welsh life and institutions and if possible, of the language.

In a British Film

All the more remarkable, therefore, was the tremendous success scored by a comparatively unknown Welsh comedian, Roddy Hughes, in a recent part in a British film. The picture “Lest we Forget,” had a rather sentimental theme and was made in great haste by a company which lacks resources of some of the bigger producing concerns.

“Lest we Forget” begins in wartime. An English officer, a Welshman, and Irishman, and a Scot find themselves marooned in a shell-hole during a retreat. There and then they agree to foregather, in exactly 20 years’ time – if they’re still alive – at the Englishman’s house. The bulk of the film deals with the happenings in that house – 20 years after.

When he heard about this picture Roddy Hughes, a Welsh actor of great experience who had been fighting, without much success, to get into pictures for two years, went to the studio and insisted on seeing Baxter and recommending himself for the part. At the time they had another excellent actor (not a Welshman) in mind, but they saw that they had the right man here. Roddy Hughes got the part.

I saw this picture (it was supporting an expensive American production) some weeks ago in the biggest and most fashionable cinema in the West End. It had been slipped into the programme, with considerable misgivings on the part of the management, because it happened to be the twentieth anniversary of the outbreak of the Great War.

The interesting part of my visit was not so much the obvious success of the picture as a whole (its merits made that easily understandable), but the fact that it was Roddy Hughes, as a Rhondda miner, who scored definitely the biggest personal success with the almost entirely English audience.

Every line (many of them had been suggested by himself during making of the film), brought a gust of unforced laughter from a huge audience. By the end of the picture the short, whimsical, cheerful little Welshman had firmly established himself in the affections of the audience.

The actor who has thus established a fair claim to be Wales’s best representative in the distinguished company of the world’s funny men is 40. As with most people who make a sudden and striking success with a single piece of work, his story is a long tale of patient struggle and gradual progress. Through years of “trouping” up and down the British Isles Roddy Hughes has developed a cast-iron acting technique. If he “puts himself over” in a film or play it is not by casual hit-or-miss methods dependent upon his high spirits or personality (through both these help), but by the careful timing and calculated art of a man who has learnt a difficult job in a hard school.

Llandudno is his home. He is the eldest of the three sons of the late Canon Llewellyn Hughes, rector of Llandudno. Throughout his childhood he acted, clowned, burlesqued and mimicked incessantly. It was in his blood, and you cannot stop that kind of man from going on the stage.

He went to Llandovery, where he and his young brother Darrell (a kindred spirit, tragically killed in the War) were famous for their renderings of “I’ve got a motto – Always Merry and Bright.”

His father was a wise man, and did not try to prevent him following his real vocation. Through Miss Douglas Pennant and Lord Mostyn he made the acquaintance of Cyril Maude.

“I called on Cyril Maude in his dressing-room,” he told me. “It was my first experience of that kind, and I was trembling with nervousness. He was charming to me, and he will always remain my theatrical godfather. Thanks to him, I met Charles Windermere and under-studied him.

“Like everyone else I thought I had to have a stage name. So I changed Rhodri Hughes to Hugh Rhodri. It was no good. People couldn’t pronounce it, and most of them thought it was German.

“I soon decided that my own name would do very nicely. Most of my friends and relatives called me Roddy, though in Llandovery I had been Rhodri to most of the fellows.

The War and After

“The war came, and after it I really had to fend for myself. I’ve toured the British Isles for years in dozens of plays and musical comedies, staying in uncomfortable boarding-houses and travelling in draughty trains. Once we landed in a tiny place called Alexandria in Scotland. I thought we’d landed in Egypt for a moment. We had no act in an old dye-works there, and I had to walk two miles across barren moors to get to the farmhouse where I was staying.”

“I’ve ‘played’ Cardiff and Swansea a lot; I usually manage to bring a little Welsh into my stuff. The audiences there are fine. Unfortunately, I don’t speak Welsh fluently, and to get the right intonation and pronunciation into my version of ‘Sospan Fach’ in ‘Lest We Forget’ I worked on it with a welsh girl in the baker’s shop down the street!”

“I’ve done ‘When Knights Were Bold,’ ‘To-night’s the Night,’ ‘The Maid of the Mountains,’ ‘The Lady of the Rose.’ ‘Yes Uncle,’ ‘Rose Marie,’ and lots of other things. My best part in the West End was in ‘Frederica,’ but it didn’t bring me the engagements I had hoped it would. Nowadays, the provincial theatre has crumbled up, and I’m gradually transferring my allegiance to the thing which has smashed it – the cinema.”

What he wants most

Roddy Hughes is short, tubby, jovial and bespectacled. He is remarkably versatile, able to give an excellent account of himself as a singer, as a clown, and in serious character sketches. At various times and in various places I have seen him give first-rate performances in every sort of role. He is a master of dialects of every kind, and can present a Cockney coster as convincingly as a Rhondda “Shoni.”

He is working at the moment at Elstree, as Short, of Codlin and Short, in “The Old Curiosity Shop,” and the pair are so grotesquely well matched that in film circle they are discussing “teaming” them as a British reply to Laurel and Hardy.

Bur what he wants more than anything is a good story with a first-class Welsh comic-pathetic character in it. If he can get that he hopes, and those who know his work believe, that he will create something really memorable and notable.

“John Baxter, to whom I owe any success I’ve had in pictures,” he told me, “is ready and keen to make a picture of that kind. Welsh humour of the sort I try to express is something absolutely new to cinemagoers. Everyone who has seen my picture says so. Now I want to do something bigger and better.”