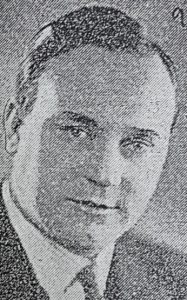 One rainy winter’s evening not much more than a year ago a queue was drawn up outside a theatre presenting the Carl Rosa Company.

The queue was being treated to a spiritless display of alleged singing from an Englishman down on his luck. Unlike Welshmen who circumstances have driven to street-singing, and whose London method is usually to sing not wisely bit too well (to indiscriminating Saxon passers-by), this man emitted only a few puny bars, scarcely audible; then hastened to pass his cap round.

“Why, you’ve hardly earned your pay yet!” said a passer-by whom the singer approached before trying the queue. The remark, meant not unkindly, was partly misunderstood by the singer.

“Huh!” he retorted, with the scornful tone adopted by those who have nothing to lose. “You wouldn’t have the courage to stand up and sing at all!”

An hour later the theatre was ringing with the applause of an enthusiastic audience for a noble rendering of the Prologue to “Pagliacci.” The singer’s face, through its make-up, was vaguely familiar to many of the audience. It was the man who “wouldn’t have the courage to stand up and sing.”

His name was Redvers Llewellyn, a young Welsh baritone who, unknown three years previously, had had a rush to prominence unparalleled in recent British musical history.

When the Carl Rosa Company, the means of bringing before the public so many fine Welsh singers, was in Swansea in 1928, this young singer, not unknown locally and thoroughly trained, applied for work with them. They were quick to see that they had a find, and offered him a contract at once, to sing in the chorus.

Completely innocent of any stagecraft or theatrical experience, he accepted – after a short interval in which he wisely trained his voice even more painstakingly. He started in the chorus. In a fortnight he had taken a part – small part, but a part. In four months’ time he was a minor principal; in a year a fully-fledged principal. Up and down Great Britain he toured for over four years, acquiring poise, confidence, fluidity, and a sense of the theatre.

He was learning what so many other Welsh singers – and so many more would-be singers – have learnt, that to make a career as a singer today you have to know all sort of things besides mere singing, however exquisite your sing may be.

He was discovering his special excellences, and cultivating them; his eradicable weaknesses, and eradicating them; his ineradicable ones, and learning to cover them up. He was finding out that his high, resonant baritone lent itself best to Verdi and Puccini and the Latin school of opera generally. In this respect he differs noticeably from most of our other Welsh stars, who excel above all in the Wagnerian style (in the last season of Promenade Concerts the eight Monday evenings, which are devoted to Wagner each year, were virtually monopolised by Welsh singers).

There is hardly an important provincial town in England which has not, by the applause of its audiences and a more calculated tribute in the local press shown in its appreciation of his masterly singing and acting in “Pagliacci,” “Il Trovatore,” “Carmen,” or “La Boheme.”

At the Old Vic

The legend of his excellence reached the West End of London, and this season he made his debut in the Old Vic – Sadler’s Wells Company, which is in fact if not the name of the Civic Opera Company of London, Miss Lilian Baylis brought him in, and her judgement has been noisily approved by the celebrated gallery audiences at her two theatres. Steadily the standard of acting, production, singing and playing at these houses goes up, until their work can quite fairly be compared with that to be seen at the two Paris State opera houses – if not yet with the Scala at Milan, or the Dresden, Berlin, and New York Houses.

The Duchess of Kent, before her marriage, stated publicly that her greatest thrill as a Londoner would be to attend them regularly; she will have to make good that promise.

I talked with “Tom” Llewellyn, as his friends call him, as he sat, convalescent, in a dressing-gown, on a couch in his North London home. He is recovering cheerfully from a severe attack of bronchitis. He is of average height, clean-shaven, with a large well-shaped head and a fine profile. It is not surprising that, for a singer, he is a remarkably well accomplished and moving actor, excelling in make-up.

No Belief in Eisteddfod

“They call me Redvers because I was born just after the South African War, when Redvers Buller was a household name,” he told me. “Briton Ferry was my home town and I was brought up, fortunately, to make singing and music generally for granted. To me it was just part of life. My father was a member of the Aberavon Choir, very famous in its day. Their trips to London to sing at the Queen’s Hall and the Albert Hall seemed tremendous thrill to us then.

“I studied the piano and the organ. My father told me one day that I had a voice, and a good one. I decided to see what I could do with it and I studied hard under Mr. Ivor Owen, to whom I owe a great deal, and later in Cardiff, doing hard office work in the meantime for a living.”

“I conducted a choir too, and we competed in five eisteddfodau, winning each time. But I will admit that I am not a great believer in the Eisteddfod as a cultural institution. To go to a ‘National’ is a great experience for a Welshman and for a foreigner, too – but, to my mind, Welsh music will derive more real sustenance in the long run from the Mountain Ash Festival and similar movements. “My first important engagement as a professional singer was with the Carl Rosa Company. It was only five years ago.”

He went to tell me something of his ambitions. He has the rare gift of being able to describe his plans and hopes without seeming egocentric or bumptious. He knows he is good; and being good without knowing it has kept greatly-gifted Welsh singers back far too often. He has no illusions about the difficulty of the road he has set himself, nor about the need to do uncongenial jobs in order, one day, to belong to the select band of artistes who sing where, when, and what they please.

He is learning Italian and French, paying visits to Continental centres – finding out the tricks of the trade and the quality of the competition.

He welcomes adverse criticism – once he convinced of the bona fides and the status of the critic. Though his five years in opera have been amazingly successful and satisfying to critics, he has much bigger ideas for the future. He will surprise none of his friends if fulfils his ambitions.

Many have been wondering what has become of Mr. Redvers Llewellyn, the Welsh baritone, of the Old Vic Company, and an old Briton Ferry boy.

He joined the R.A.F. and went to South Africa in October 1940. That was the last I heard about him until today when I received I note from him at Pretoria. It reveals that he is now a flight-lieutenant on headquarters staff helping with the R.A.F. personnel if the Union under the Air Training Scheme.

I meet many lads from the Welsh home towns, “he tells me,” “and they turned up in great numbers for the cricket match between the Transvaal and the R.A.F. Wally Hammond happened to be in the Union and also Singleton, of Worcester, and Gordon the South African bowler, so we had an exciting march.”

Mr Llewellyn writes in enthusiastically of the loyal sentiments of South Africa and the fine spirit of ungrudging hospitality everywhere in the Union. He has been sing a good deal out there, first with the Cape Town Symphony Orchestra and also at the Broadcasting Studio. He has appeared on the concert platform at Pretoria and Johannesburg.

Mr Redvers Llewellyn the Welsh operatic baritone, is to make another opera and broadcasting tour of South Africa, for which he leaves on Thursday. He will be singing with that splendid organisation, the South African National Opera Company, encouraged and subsidised by the Johannesburg Council, which has also established a city orchestra to support the company.

From people returning from South Africa I have heard great praise for the orchestra, which includes many highly skilled musicians anxious to get away from Europe. Mr. Llewellyn’s engagement begins in Johannesburg with an eight or nine weeks’ season, after which he and the company will go to Cape Town and Pretoria – four months in all. The Welshman is taking the leading roles in “Rigoletto,” “La Tosca,” “Carmen,” and “Aida.” “Rigoletto” is perhaps his most famous part; certainly it gave him his greatest Sadler’s Wells triumph before the war.
He has a host of friends in South Africa, where he served for a time during the war with R.A.F. Then in 1946 he made a tour of the Union, doing a considerable amount of broadcasting. That he is in good voice those were at the Albert Hall for the Birthday Prom in memory of Sir Henry Wood, or who heard his songs of the seas on the wireless, can testify. A Briton Ferry boy, he often visits his father, Mr. John Llewellyn who still reside there.