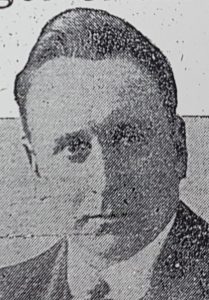 A sweet Singer of Land of Song
By Glyn Roberts 1933

Ben Davies cannot go on for ever; but he gives a very good imitation of a man who means to.

In the meantime there is a group of Welsh tenor singers in London who are competing keenly for the position he must, sooner or later, vacate – that of the leading Welsh tenor of the day. It includes Francis Russell, Walter Glynne, Tudor Davies, Ben Williams, Trefor Jones, and Parry Jones. They are enormously dissimilar in their styles, in their physical appearances, in their favourite metiers. Bust as a group they would be a credit to any nation; to a nation with a population of less than three millions they should be an eternal glory.

Of this group Parry Jones, I think, stand out. Probably the senior in age an experience, his status in the musical life of Great Britain increases every year. Equally at home – unlike several of the group I have named – on the concert platform, in oratorio or in opera, he is now probably the most accomplished, as well as the most reliable and versatile, tenor singer in Britain.

Like Arthur Fear, who stands out among British baritones, as he himself stands among tenors, parry Jones comes from the Monmouthshire village of Blaina. Mostyn Thomas, a robust basso of the popular type, hails from the same town. Three singers of such eminence is not a bad quota for such a village, and the people of Blaina will do well to watch the progress of all three during the next ten years. And that goes for everyone in Wales.

Parry Jones, unlike so many of our prominent singers today, did not serve an apprenticeship in the mines. Realising that he had a voice which might be his fortune, he borrowed the money necessary for a thorough training, and before the war broke out he was already marked out as a young singer of promise and personality.

He shared with a great Welshman and his daughter, Lord Rhondda and the present Lady Rhondda, the doubtful pleasure of being on the passenger list of the Lusitania on her last voyage. Lady Rhondda has described the sensations of the survivors graphically in her memoirs; of Parry Jones’s feelings, all I know is that it is related that when he was fished out of the icy water after six hours’ immersion he told his rescuers, bitterly, “I may be able to sing, but I can’t sink.”

Inability to sink is one of the draw-backs of stoutness, and Parry Jones had not been entirely immune from the gradual increase of girth which has, since the world begun, been one of the penalties of eminence in a singer. Today in middle age, he is portly and dignified, with a bearing on stage and platform which many of our young singers would do well to study and emulate.

“Parry Jones is the quickest thinker on a stage I’ve ever known,” Arthur Fear told me recently, and the very next evening, watching a performance of “Tannhauser” which had not been as thoroughly rehearsed as it might have been, I had an opportunity of proving Fear’s assertion.

Through no fault of his own Parry Jones was left standing without a cue on a stage which should have been packed with a chorus. Without a flicker of the eye-lash, he covered over the lapse until order was regained. Probably not one in a hundred of the suburban audience even realised that there had been a hitch. Since then I have seen the same thing happen more than once.

In opera Parry Jones stands alone among British tenors. Years of experience in London and on tour with the various opera companies which have existed during the last twenty years in England have given his a dignity rare among singers. He makes up well and has a striking profile.

His performances as Walther and Tannhauser earlier this year in the London productions of the ill-fated Metropolitan Opera Company were one of the features of that gallant venture. I particularly remember two excellent performances of “Die Meistersingers,” in which three Welsh artists, Fear Jones, and William Michael, as Sachs, Walther, and Beckmesser respectively, dominated the performance. As Tannhauser, with Thea Phillips as Elizabeth Jones scored as equal success.

An accomplished musician ha has sung every important tenor role in oratorio; he has appeared time after time in the concerts organised in connection with the National Eisteddfod, and sung at very important musical festival. He is a natural tenor of the best type, with a voice of great range and, when he cares to let it come out, considerable volume. His recent appearance with the Ystalyfera Choir at the Queen’s Hall was a revelation to hundreds of London-Welsh folk who support their own artists with perhaps rather less zest and regularity than they might.

I first interviewed Parry Jones at the Savage Club, on hearing that he was to appear with Evelyn Laye in a film. It was his first appearance on the screen.

“I used to think film people had an easy time of it,” he told me, “but my ideas have undergone a severe change during these last few days. It’s the hardest work I’ve ever done.”

Hardly ten minutes had gone before an attendant announced that Miss Laye was waiting outside in her car. And Parry Jones was swept away to the tireless rehearsing and re-acting of his comedy scenes which a few months later the critics applauded as one of the brightest spots in a rather pedestrian production.

I have not yet heard Parry Jones labelled, as Tauber, Gigli, Schmidt, Melchor, Hendrick, Martinelli, Burke, Kiepura, and a dozen others have been hailed by their various devotees as “the successor of Caruso.” Perhaps it is just as well. Already a great number of “successors of Caruso” have faded and died.

But Parry Jones’s reputation, until recently confined to this country and America, is spreading Germany and Russia are immensely interested in him, and it is political and personal rather than musical obstacles which have prevented several interesting tours on the Continent lately. He shares with Paul Robeson the distinction of being one of the few non-Russians musicians who have been asked to visit the U.S.S.R. The Dresden Opera House, artistically second to none in Europe, offered him a role which any living tenor would have been glad to sing.

He lives in South London; his hobby is cricket; his accent is faintly Welsh. He dislikes discussing his own career and achievements and is inclined to look at his feet when the compliments start to fly.

But he probably realises what the critics have dunned in steadily these last years, and what we in Wales are learning at last, that he is a singer, and an artist comparable with the illustrious Ben himself.