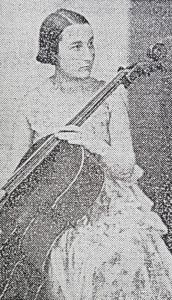 Since the days of the great harpists, Wales has produced very few instrumentalists who have attained national, much less international fame. Reasons have been advanced for this – the lack of a national subsidy to orchestras in our cities, the absence of any tradition, the racial aptitude for vocalising rather than extracting sounds by percussion or by blowing down a tube.

The pessimists tell us it will always be the same; that we are, for a musical people, shockingly defective in any sense of rhythm, parochial in our musical culture, and limited in our technical equipment.

All half-truths, no doubt; but it does strike the outsider that a country which produces such a steady stream of excellent singers and so many composers of distinction should have so few violinists and pianists of equal merit. It does seem also to be almost a duty to those of us who can help little, and to the whole of the Welsh people, to take a real interest in those young musicians who are trying to rectify this state of affairs.

Last week I met one of the most interesting and certainly one of the most promising of these. She is Miss Megan Lloyd, and she plays the violoncello, to use the massive name for the massive instrument most of us know as the ’cello. It seems very probable that in 10 years-time Miss Lloyd will be a national celebrity in Wales and perhaps internationally known. Already extremely successful as a solo player, she has resisted every temptation to rush into a life of furious activity as a performer, however tempting the offers may be and often have been.

Megan Lloyd is small dark, petite, with delicately moulded features which I think I can safely call “typically Celtic.” She is ambitious, and confesses it frankly. When she speaks of her art, she waxes enthusiastic and her eyes shine as she anticipates the future.

“I am not going to rush myself,” she says. “There are different ways of playing the ’cello you know. It is possible, once you have reached a certain point in developing one’s technique to be effective and, in a sense successful quite soon after beginning the study of one’s instrument. There are ‘cellists playing publicly today who have not been studying for many years.”

“But to get the full range of effects from the instrument the player needs considerable physical strength, and this strength has to be in precisely the right places. In most cases this is a very long and perhaps tedious business. If you cannot wait for success it is heart-breaking. But the two great Spanish ‘cellists, Pablo Casals and Guilhermina Suggia, did not reach fame overnight; they had to practice for hours a day over a long period of years. As for the latest sensation Piatigorsky, it is true that he is a very young man, but he has the physique of a Carnera. He is lucky; I am no Carnera. Before I shall be really completely equipped as a ‘cellist, several years of gruelling study and development must pass. But I am not depressed by the prospect.”

Lucky In Her Father

“I am very lucky in having a father who has never opposed my wishes. At one time I used to paint quite a lot, chiefly in water colours, and at that time he was quite willing to let me study it seriously if I wanted to go on. But I didn’t want to go on, because I had decided on something else.”
“When I was very small I used to play the violin under Mr. Percy Hodgson, of Cardiff, and when I was 13, I went over to the ‘cello.”

“Mr. David Collier, who is now at Cardiff College, was my first teacher. My father has always helped e wonderfully, and I only hope his faith in me will be justified.”

Porth, in the Rhondda Valley, is Miss Lloyd’s birthplace. She was born in 1911, and her father is Mr. E.L. Lloyd, headmaster of Islwyn School; her late mother was the organist at Salem Baptist Chapel, Megan Lloyd, owing to poor health, was not able to attend school regularly, and studied at home instead.

Since she left school she has worked intensely and tirelessly at her chosen instrument. Her studies have been punctuated by a series of triumphs, both in competitive meetings and at concerts. She won a five year scholarship at the Royal Academy of Music, where she studied under Mr. Cedric Sharpe, who attributes “exceptional talent and ability” to her. While still at school she was actually placed first out of fourteen thousand candidates in the Royal Schools Advanced examinations, and awarded a gold medal.

At the Royal Academy she collected prize after prize – the Sir Edward Cooper Prize, the Leslie Alexander Gift, the Patti Prize, the Alessandro Pezze Prize, two bronze medals, and two silver medals. At this point she was made sub-professor of the ‘cello, a post she held for over two years: in the course of the latter year Sir Landon Ronald awarded her the Romberg Prize, an extremely hard one to get.

She made trips west. She won four prizes at National Eisteddfodau, at Swansea, at Holyhead, and Treorchy. At Bristol and West of England Festival she won a gold medal, a cup, and a silver medal. She played the solo ‘cello at the Queen’s Hall at the R.A.M. concert, and broadcast frequently from London and Cardiff.

This was all very well, but she was the severest critic of her own efforts. Two years ago, dissatisfied with the way she was arranging things, she gave up all public engagements to study more intensively under Mr. Arnold Trowell, in whom she has the greatest faith as a teacher.

Arthur Fear and Francis Russell are two of her greatest friends among London Welsh musicians; the latter is, in fact, a sort of unofficial adviser in all musical matters. Miss Harriet Cohen, the great pianist, and Mr. Arnold Bax are intensely interested in her future.

Mr. Bax, who likes discussing the Mabinogion with her – believes she has a great future, and has praised the “marked refinement and sensibility” of her playing. Miss Cohen says; “She has shown herself an unusually gifted violoncellist, both as regards technique and in true musical feeling. She has worked with me and I have always found her delightfully intelligent and sensitively musical. She has a charming and attractive personality, which accompanied by her genuine talent and determination to excel should ensure her success as a soloist.”

Megan Lloyd hastens slowly; but is seems a matter only of years before all Wales will be hailing its first great ‘cellist.