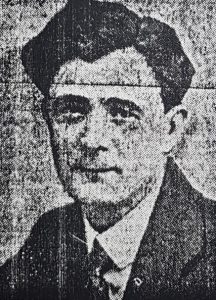 On my first visit to London, which lasted for three days, I found my way to the Royal Albert Hall one morning, and, wandering about unobserved in its huge hollowness, came to the keyboard of the greatest organ in London. I sat on the seat and greatly hoping, pressed the keys. Nothing happened, and I left a disappointed man.

It was two years later that I next entered the Albert Hall, the occasion, I think a mass meeting of Civil Service clerks to protest against pay cuts. As I arrived a rumble, such as might be the preliminary to the crack of doom itself, was shaking the great hall, and I saw with a pang of envy that someone was playing a mighty air from Handel on the organ. I looked at my programme: the name was Llewelyn Bowen. I never forgot that name.

It was several years later that I first met Llewelyn Bevan, so small a man to wield such power! Surely, there must be some powerful inner force which drives little men to play great musical instruments, just as it drives them to seek political authority over the lives of their fellowmen. The urge to “compensation,” as the psycho-analysts call it, is irresistible, though its expressions are many.

Llewelyn Bevan is one of the most versatile, popular and accomplished of the musicians who lighten the burden of life for the London Welsh colony. Composer, teacher, organist, pianist, choir-master, organiser – all these are within his orbit, and in all he has set himself and maintained high standards. Since the Great War London has been the centre of his activities, and he has made himself indispensable to the community of which he is a member.

A patient, affable, encouraging man, who will go to endless lengths to get the rendering he requires, he has been responsible for scores of interesting and eminently worth-while performances of oratorio and light opera among the various societies and groups he has helped. The four greatest organs (apart from one or two cinema organs) in London, those at the Albert Hall, Queen’s Hall, Kingsway Hall, and Central Hall have all felt the subtle evocation of his expert touch.

Llewelyn Bevan is a short man of small frame, and with one of those delicately-chiselled heads with small features, so common in South Wales. It was Penrhiwceiber 48 years ago that he was born.

Soon after his birth the family moved to Aberaman, thence to Aberdare, and finally to Swansea, which is the town he remembers the best. From the age of eight until manhood he lived there, and took to music as a calling.

“I was very fortunate, I consider, in having two of the most brilliant musicians Wales has produced as my tutors,” he told me. “I mean Harry Evans and the late Dr Vaughan-Thomas. Under their guidance I got a post as organist as the Alexandra Road Chapel, and later at Argyle. I became very busy, indeed, as a trainer and organiser of choirs, and my work as a lecture, chiefly under the auspices of the Y.M.C.A., took me all over Wales. The War interrupted the phase of my life and introduced me to another which, in spite of its tragic accompaniments, was extraordinary interesting to me. I was sent out to France early in 1915 to look after the musical well-being of the troops, and for the next three years I think I was busier, and in more different ways-than in any other time in may career.”

“I organised song parties, concerts, libraries, performances of operas and oratorios. I co-operated with some famous theatrical people, particularly Lena Ashwell, and we put on ‘The Mikado’ at the Theatre des Arts at Rouen. It was a very successful show, too. I spoke French and German well in those days, and they made great use of me as an interpreter.”

“When the War ended I thought it might be good idea if I settled in London. I took a post as a great Y.M.C.A. at Plaistow in East London, and there, too, I found my hands full with musical work. One of my biggest jobs at that time was a production of ‘Hiawatha’s Wedding Feast.’”

“Soon afterwards I became the conductor of the London Welsh Male Voice Choir. There is no need to remind the London Welsh of the fine choir! We swept the board in most of the competitions we entered we entered, and broadcast once or twice. But it has always been hard, geographical and other factors being what they are-to keep an organisation of that kind together for long in London, and in due course it disintegrated. It was a very great pity.

Eleven years ago I offered the post of organist as the little Welsh Chapel in the heart of the City ‘Jewin.’ I have been there ever since, and am very happy there.

“Naturally, I am active in many other ways. The League of Nations Union has paid me the compliment of making me its hon, organist, and in that capacity I play in all parts of London, often on the finest organs available. I do my usual quota of organising and training a choir out of West Ham, where I live: here the local choral society, under my conductorship is preparing a performance of ‘Elijah.’ The ‘Young Wales’ Music club occupies a good deal of my time: I was one of its founders as a matter of fact.

As an accompanist, Mr Bevan has earned the approval of that most exacting of singers, Mr Ben Davies (for whom he has, like every other London Welshman, unbounded admiration). As an organist he is in steady demand, and will be the accompanist at the big St David’s Day celebrations at the City Temple at the end of the month. As a teacher and musician he boasts the solid qualifications of Associate of the Royal College of Organists, Associate of the Royal College of Music and Licentiate of the Royal Academy of Music.

He believes music in Wales is on the upgrade, although he feels that a little more official support of such men as Dr Vaughan-Thomas would speed up that improvement astonishingly. The new broadcasting arrangements, he believes and hopes, cannot fail to assist dozens of young Welsh composers to bring their work before the public, the first necessity if a man is to carry on. As for himself, he admits frankly to possessing a fat pile of manuscripts, all unpublished and for the greater part unperformed.

“But I have not given up hope by any means,” he adds.

In a fortnight’s time at the Young Wales Music Club, which he did so much to found, a whole evening will be devoted to the performance, by a group of London Welsh singers, of many new works for the voice by Llewelyn Bevan. Good luck, Llewelyn Bach! Perhaps we shall know you soon as the Welsh Bach, I shall not be surprised.

Back to London welsh