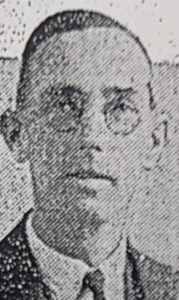 I have just met a Welshman, Mr John Paske, formerly a miner at Llanerch Colliery, Abersychan, and now one of the most distinguished herbs experts at Kew Gardens.

I saw him at his beautiful new flat to which he and his family have just moved in Brentford, one of London’s most attractive suburbs.

Here he told me all about his career the hard times he underwent when his colliery closed down and his very existence was precarious. It was the interest he had always taken in the wild flowers of Wales, that led to his obtaining his present job at Kew Gardens.

Born in Pontnewynydd, Mr. Paske comes of a family whose members for many generations have worked in the mines. His father, Mr. Jacob Paske, still lives in the village, though he has now retired.

“We all began work at an early age,” he told me, “and after leaving the British School at Pontypool, where I had been educated, I myself started at the colliery at the age of 13.”

“I spent 22 years in the mines,” he went on. “Often we worked in passages not more than 3ft high, lying on our sides and scarcely able to move.” Then looking around his new home with pride and pleasure, he added, “Though I am far happier here of course. I was tremendously lucky to get this job.”

Search for a Job

When the colliery closed in 1928, Mr. Paske was out of work for 14 months. “I went down to Pendine, which is my wife’s old home,” he said, “but I could not get nothing there. I applied for a job offered by the Prince of Wales on his estate in the Scilly Isles. But again, I was unsuccessful. It was given to another man with several children. Then, with 12 other miners, I was offered a temporary post at Kew.

Here I was happy, and when they found me really keen and interested in the work I was kept on permanently. So now you see Mr. Paske cheery and well-established in a most specialised job in which he has become an expert.

At Kew he is in charge of the herbaceous and rock gardens, from which he is responsible for collecting the seeds, many of which are rare specimens, to be sent to foreign countries. In his leisure he writes learned articles about plants and herbs, and, believe it or not, he knows them all by their Latin names.