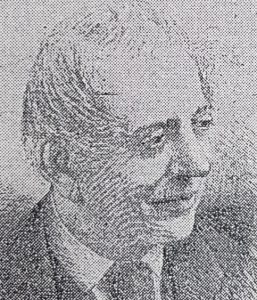 A Welsh Singer as Pioneer
Evolution of a New Entertainment
The First Song-Piano Comedian
By Geraint Goodwin – 25.03.1927

A controversy has arisen in London musical circles as to who was the earliest “songs-at-the-piano” comedian – probably the most popular type of entertainment. The consensus of opinion favours John Parry, who “was and remains easily the greatest.” Below we give an account of this almost forgotten Welshman, who has unconsciously shaped present-day theatrical programmes.

John Parry the younger, acclaimed the first and greatest comedian-accompanist, was so called to distinguish him from his father, John Parry the elder. Like Chatham and Pitt, the son inherited the distinguished gifts from his father – with certain reservations. They were both musicians with a fine ear for harmony and a flair for composition. But there all comparisons end. The elder, an Eisteddfodic bard, played the harp; the younger a popular comedian, played the piano and – on the stage – the fool.

We are told that John Parry the elder – a native of Denbigh – joined the local band, and by reason of his feat in playing three flageolets at once, was asked to exhibit his powers at Covent Garden, thus beginning an eventful career in London. He was engaged to write songs for Vauxhall Gardens, conducted the Eisteddfod at Wrexham in 1820, at Brecon in 1822, and received the bardic title of Bardd Alaw. He was of the chief promoters of the Cambrian Society and became its registrar; was, among other things, honorary secretary of the Methodists’ Club, concert critic of the “Morning Post,” and musical editor of the “Sunday Times.” He wrote extensively on matters connected with the Welsh national instrument – “An Account of the Rise and Progress of the Harp” (published in the transactions of the Cambrian Society), and in “The Welsh Harper” published a collection of Welsh melodies containing most of those Jones’ “Musical and Poetical Relickes of the Welsh Bards.” Many of his Welsh airs and arrangements are included in the standard “Songs of Wales,” and his plaintive melodies are still sung in the land of his birth.

It was only to be expected that Parry the elder was quick to initiate his son into the mysteries of how own favourite instrument. At fifteen “Master Parry” appeared in public as a harpist, but his debut as a vocalist was delayed until 1830, when he was twenty years of age. We are told that his voice “was a baritone of rich, though not powerful quantity,” and his forte, simple ballads. The young man was subsequently taken in hand for a time by Sir George Smart and later studied under Luigi Lablanche at Naples. Here his gifts of comedy were soon to assert themselves se we gather from his appearance with his tutor in a burlesque on “Othello,” when Parry appeared as Desdemona, dressed a la Madame Vestris, and singing “Cherry Ripe.” He was soon to return to England equipped with a fluent knowledge of Italian, and made his debut on the stage at the St. James’s Theatre in “The Sham Prince,” a piece written and composed by his father, and soon afterwards appeared in “The Village Coquettes,” a piece written by a then young aspiring dramatist, Charles Dickens. By 1842 he had forsaken the stage for the concert room. 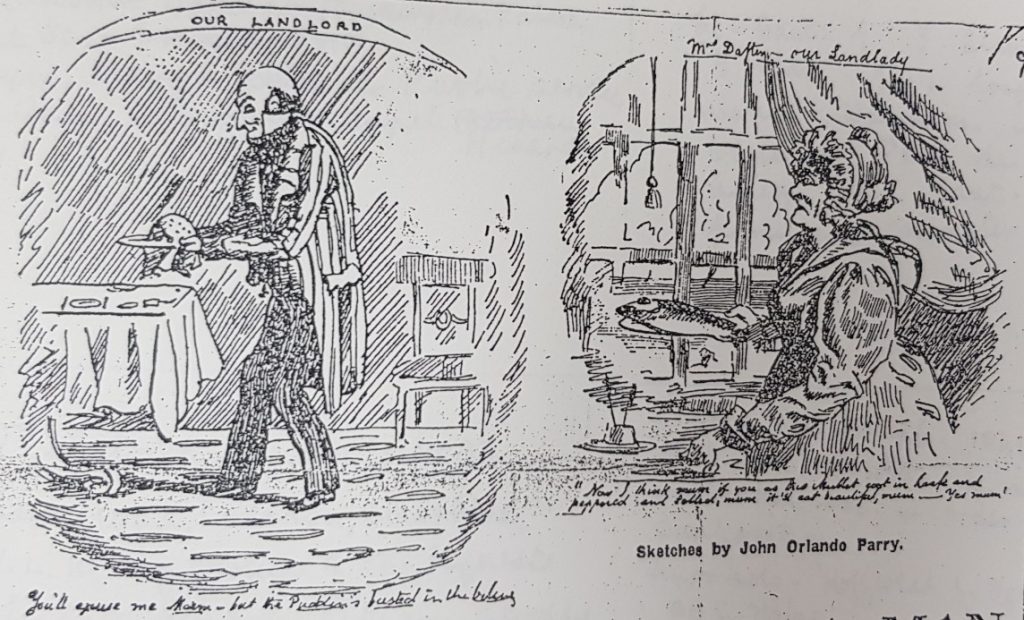 An example of the man’s versatility is to be found in the fact that in 1849 we fin him, illustrating an entertainment specially prepared for him with several large water-colours painted by himself. Here too, he was unconsciously breaking fresh ground, for his performance was the forerunner of the now popular “Songs at the Piano” turn which every popular comedian has in repertoire. Without John Parry there might have been no Harry Lauder! We are told he “indulged in monologue sang in different voices, played the piano, and made rapid change of dress.” He was in effect a versatile revue star in embryo. This entirely new entertainment proved an immediate success, and Parry was in great demand in consequence. He appeared regularly at the old Crosby Hal (Bishopsgate Street), as Willis’s Rooms in Covent Garden, as his favourite theatre, St. James’s, and in the provinces.

Here for nearly nine years he delighted London with his wonderful powers of mime, his droll impersonations, and his musical monologues.

In 1869 he was feted by a distinguished party of amateurs at the Lyceum Theatre, and in 1877 took a farewell benefit at the Gaiety, which brought him £1,300. But the greater part of his forty years savings was lost through a defaulting solicitor, and his last days were embittered in consequence.

He died at the residence of his daughter, Pembroke Lodge, East Molesey, Surrey, on February 20, 1879. His songs – of which are a great number, “Fond Memory,” “We Are Two Loving Minstrels,” “Tell Me, Gentle Stranger,” “Nant Gwynnant,” and many others, survive him.

The son of a composer of some repute, he became in early life a concert singer, and in course of time started the peculiar entertainments with which his name is so closely associated. From 1860, to 1869, he was with Mr. and Mrs. German Reed, at the Gallery of Illustration. He formally retired from the stage about two years ago.

Mr. Parry was a native of Denbigh. The following is extracted from a leading article in the “Standard:” By the death of Mr. John Parry musical art has lost one of the most dexterous and expressive pianists. He was in his way a genuine artist, of a highly finished and imaginative kind. He was an artist, too, not merely on the stage or in the concert hall, but in the studio. Many of his water-colours were really exquisite. He had an innate refinement and judgment which enabled him in whatever he delineated, whether with the voice, or the keys of the pianoforte, or with his pencil, never to miss those due proportions in the failure to attain which vulgarity consists. As a youth Mendelssohn recognised his powers, and when he bade the young man adieu it was with the remark that he had a great future before him. On the whole, the confident prediction of the august expert was fulfilled. John Parry both made his mark in the musical world, and may be regarded as the founder of a school. He had studied music scientifically from a child, and when first he became known as an entertainer he brought to his work extensive and varied experience.

Thirty years have passed since he made his bow to the public in that capacity. The “entertainment” was not, indeed, unknown before his time, but John Parry gave to that mode of popular amusement a grace, dignity, and elegance which it had not previously possessed. It was, indeed, in his hands something generically new. He may not have always composed the words of his songs – indeed the words of many of them were written by Albert Smith but the music was invariably original, while more original still was the fashion in which these songs were rendered. Each successive strain that he poured forth was a success. He seemed to have received the benediction of the good fairy, and his words were transmuted into jewels of great price. Those who are now middle-aged – or shall we say, a little more than middle-aged? – will remember the immense popularity that was the lot of “Wanted a Wife,” “Country Commissions,” Blue Beard,” “Fair Rosamond.” Parry was a passable vocalist, a consummate instrumentalist, and a born actor.

When he took his seat at the piano you really had before you three separate individualities. It is not necessary for persons to have reached Thackeray’s “age of wisdom” to recognise the justice of this description. Little more than a decade ago “The Wedding Breakfast” and “The Musical Party,” at the Gallery of Illustration, were the delight of the town. The curtain rose and displayed a middle-aged gentleman, of much the same light build and airy manner as the late Charles Mathews, in evening dress, seated before a piano. That was all the apparatus which the magician wanted. The fingers ran lightly and at random over the keys, the player keeping up the while an easy chat with his audience. He prepared his hearers for what was coming, and told them who were coming. Presently they came. What the concert is to the opera, the entertainment is to the theatre. A visit to the theatre presents itself as more or less of a serious undertaking to many estimable people. The entertainment is shorter as to time, and simpler as to quality. For the place which it has thus acquired, and the associations with which it has thus clothed itself, it is mainly if not entirely indebted to the art, the grace, we may even say the genius, of John Parry.