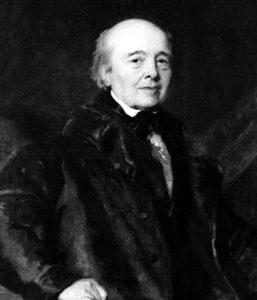 Prince of Architects
By David Owen 1950

In September 1752, was born a very remarkable London Welshman. He was a London Welshman. He was a London Welshman in the fullest sense of the term; he was born in London (although some believe his place of birth to have been Cardigan) by his building and planning he contributed to the grandeur of the metropolis; and throughout his long life he never forgot his Welsh origin. John Nash, although not devoid of faults, had many admirable qualities, among which were courage, tenacity, vision, a love of London, and an eagerness to emphasize his Welsh nationality. His father hailed from Kent, but of Welsh ancestry, while his mother was a native of Carmarthenshire.

His earliest memories were of the wharves and warehouses of Lambeth, where his father was a mill-wright. When he was eight years old his father died, and at the age of fourteen years he set out to make a living for himself. He found employment as an office-boy in the office of an important architect named Robert Taylor. One day a crisis arose; plans were needed in a hurry. The young office-boy met the challenge, and sat up drawing all night. He saved the situation, and as a reward he was promoted assistant draughtsman.

In 1778, Nash inherited £1,000 from a rich uncle; this was the signal for him to set up a business of his own, and he became a speculative builder. He was not content to be an architect in the narrow sense of the word; he was to be at the centre of big undertakings, juggling with a multitude of responsibilities. For the next four years he occupied himself in Lambeth, and then, urged on by his ambition, he acquired three houses on the corner of Bloomsbury Square and Great Russell Street. He radically altered the appearance of these buildings, and, establishing himself in one of these houses, he let the others. The move, however, was his undoing, for he was declared bankrupt the same year. Ruined in London, he fled away in 1784 to Carmarthen, where his mother was living.

He was soon at work in Carmarthen, and obtained a contract for providing a new ceiling for St. Peter’s Church. He also made the friendship of John Vaughan of Golden Grove (an influential Welsh Squire). Vaughan happening to express the desire to have a bath in his house, Nash offered to design one for him. The squire was delighted with his new bathroom, and from then onwards Nash maintained a steady hold upon the ladder of fame. His next major commission was the building of a new Carmarthen Gaol. The old prisons had been visited by the reformer, John Howard, who found them in a squalid and dilapidated condition, like most gaols of the period. The County of Carmarthen, to its credit, was not behind hand in remedying the position, and Nash’s new building marked a considerable advance. He followed up this work by building a smaller gaol in Cardigan, and later another in Hereford. Another work executed during this period was the rebuilding of the west wall of St. David’s Cathedral and the erection of a new Chapter House.

By now Nash had established an office in Carmarthen, and required skilled men to assist him. One of his first assistants was a young Welshman, named James Morgan, whose career henceforth was to be indissolubly linked with that of Nash. Morgan was as capable as he was loyal, and the two men owed much to one another. In 1793 a curious commission was received at the office. The inhabitants of Abergavenny invited Nash to; advise on the planning of a market-place. This was a very unusual type of as up to that time buildings were erected haphazardly with little regard for the general appearance of a town. The vestrymen of Abergavenny were astonishingly ahead of their time, and they gave Nash the opportunity for displaying his genius for town planning – for he was the Town Planner par excellence.

Whilst the Abergavenny work was in progress he visited Sir Edward Winnington of Stanford Court, and built an elegant little cast-iron bridge for him. The use of cast-iron was still in an experimental stage, and the day after the bridge was completed, it collapsed slowly, but surely into the stream. Two years later, however, he rebuilt the bridge by a new method, in respect of which he took out a patent for the “Construction of Plate Iron Bridges.” He was thus able to claim much credit for the introduction of metal girders, and for ab advance in the use of iron as a structural material.

Nash undertook various other private works in South Wales, but it must not be thought that life for him was only a succession of building projects. He loved the theatre, and took part in amateur theatricals in Carmarthen. There is a record of him playing the part of Sir Peter Teazle in the “School for Scandal” at the Carmarthen Theatre in 1796. In that year however, he moved back to London. At first he lived in Duke Street, but later moved to 29 Dover Street, which he remodelled so that it became the grandest house in the street – a typical grandiose gesture. He must obviously have amassed a fortune, and he felt that his grand town house was incomplete without a country seat to correspond. Hence he built for himself an odd, but strangely attractive mansion, which he called East Cows Castle, in the Isle of Wight. He was always fond of novelty, and the castle was something of an architect’s toy, with its quaint mixture of styles. In a Victorian guide-book it was described as a “picturesque structure in the Moorish style!” 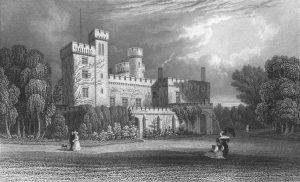 He continued his general practice, and built mansions and country houses for the nobility in all parts of the country. Mention must be made here of John Edwards, a lawyer nineteen years younger than Nash. The two men are first heard of in association during the Carmarthen days, and Edwards is described variously as “uncle,” “nephew,” and “cousin” of Nash. He too, was born in Lambeth, but the true relationship is a mystery. They remained close friends until Edwards’ death, continually working together, and playing into each other’s hands at every opportunity. Edwards changed his name to Vaughan on inheriting some estates a few years before his death, and was able to leave his son, Nash Vaughan Edwards Vaughan, a vast fortune. It was this son whom Nash, too, made his heir.

In 1806 Nash accepted the appointment of architect to the Woods and Forests Commission, and Morgan was appointed assistant architect. As the joint salary was merely £200 a year, it can only be supposed that they regarded the appointments as stepping stones to better things – a view in which they were justified by events. It was desired to develop the Crown lands in Marylebone, and it eventually became the responsibility of Nash and Morgan to produce the plans. They planned a garden city for the aristocracy, but this project was much curtailed by the Treasury. Although the scheme finally approved had not the same grandeur as the original proposal, the result (Regent’s Park and the surround terraces) was generally satisfactory to all. About this time a scheme was mooted for extending the Grand Junction Canal from Paddington to the docks, via the Marylebone estate. Nash became the driving force of the venture, which was of a kind to appeal to him: a gamble calling for the exercise lf all his astuteness and organizing ability as well as the deployment if his financial resources. A company was launched with Nash and his friends composing the controlling committee. Edwards was appointed Solicitor to the Company, and Morgan Chief Engineer, so that Nash held all the reins in his hands. It was 1820 before the Regent’s Canal was completed, and Nash rightly occupied a place of honour at the opening ceremony, for it was due to him that the project was carried through successfully, and he nearly ruined himself financially in the process.

He was by now and intimate friend of the Prince Regent, for whom he executed many works including the Pavilion at Brighton. He was often blamed for the Prince’s architectural extravagance, but it was difficult to steer a course between the Regent’s desires and the restrictions of the Treasury. Despite these difficulties he was able to effect many metropolitan improvements. His greatest achievement was to construct a highway, in the teeth of popular opposition, from Carlton House (which he later converted into Carlton House Terrace) to the new park at Marylebone. It was thus that Regent Street came into being. When the Surveyor General of the Board of Works died, Nash succeeded him. A few months later the office was abolished and Nash appointed one of the three architects under a political chief. He was thus the last to hold undivided sway in an appointment which placed him at the head of his profession, and bestowed upon him the mantle of Indigo Jones, Wren, and Vanbrugh.

When the Prince of Wales became George IV, he conceived the idea of glorifying the monarchy by the erection of magnificent public buildings. His favourite architect was always at command, and, although lack of money hampered them, they engaged in a variety of works from the building of Haymarket Theatre to the erection of Buckingham Palace. This last was a source of much contention, and, as one stage, Nash was charged in Parliament of peculation. A Select Committee investigated the charges and completely exonerated him.

The King enraged at this attack upon his favourite proposed to make him a baronet, but was persuaded by the Prime Minister to wait until the completion of Buckingham Palace. Unfortunately the King died before the work was completed, or Nash would have been the first architect ever to have received a baronetcy. After George IV died, Nash (now 77 years old and just recovering from an attack of apoplexy) strove pathetically to fulfil the dead king’s wishes, but the Treasury quickly and vindictively dismissed him from his appointment on the Board of Works, and the building at the Palace was stopped.

He was now attacked on all sides, but, with his old energy, he defended himself stoutly, and his critics often received worse than they gave. His remaining years were spent comparatively quietly, but he still conducted business, and entertained at East Cowes Castle. He maintained his connection with Carmarthen, where he built a monument to Picton (since demolished), and was presented with a gold box by the Town Council. John Edwards died in 1833, and Nash himself was now never free from illness. On the 13th May, 1835, he died. 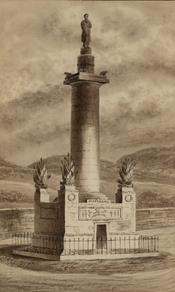 His works are his memorial, Regent’s Park, St. James’s Park, Brighton Pavilion, Buckingham Palace, and countless other places are associated with his name, but if he is remembered for the graceful curve of Regent Street alone there will be fame enough for this London Welsh prince of architects.