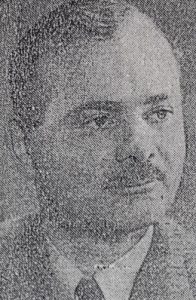 Hitherto, in these occasional essays on Wales’s composers of the present time, we have been concerned with those who have been born within the Principality’s boundaries. We turn now to one whose claim to inclusion in the series is made not by his being Welsh by birth, descent or early upbringing but by virtue of comparatively recent domicile.

Ian Parrott came to Wales in 1950, when he was elected to the Chair of Music at Aberystwyth after the retirement and death of David de Lloyd. In earlier years he had taught in Malvern and at Trinity College of Music, and had held an appointment in the music department of Birmingham University.

A cursory glance as his catalogue of compositions, however, discloses at once an acquired interest in the art of his adopted country: here an orchestral suite based upon Welsh folk tunes there some arrangements for recorders of a number of Welsh airs, somewhere a Christmas carol to Welsh words, and looming large amongst the most sizeable creations, an opera, “The Black Ram,” with a libretto based upon a Welsh theme.

It is, in fact, during what may be called his “Aberystwyth period” that Parrott has been most productive. There are, of course, several compositions belonging to earlier years and a few which date from the 1930’s – amongst these last are an orchestral scherzo to which I have not had access and a Minuet in A minor for oboe and piano.

The latter piece, the earliest of Parrott’s works available in published form, was written during his undergraduate days at Oxford and, unambitious in aim though it be, is deserving of study on account of the pointers which it provides to the direction in which, in later years, Parrott’s technique was to advance.

Already the young composer is betraying his fondness for the interval of the augmented second, already he is giving an unexpected twist to his melodic lines, already he is investigating albeit on a small scale the possibilities of polytonality.

Shortly after the outbreak of hostilities in 1939 Parrott was called to the Colours – a circumstance which, in the nature of things, caused a brake to be applied to his activities as a composer. Even a fighting soldier, however, has a few moments sometimes to himself and such of them as Parrott enjoyed were turned to musical account in the completion of “The Sergeant-Major’s Daughter,” a burlesque opera produced in Cairo in 1943. To the same phase of the composer’s life belong a second Scherzo for orchestra and also “El Alamein,” a symphonic prelude of some ten minutes’ duration first played at Guilford in the autumn of 1945.

Since then, new works have issued from his pen in increasing profusion. Amongst them are two symphonies, a concerto for piano and another for cor anglais, a set of variations on a theme of Dufay and other orchestral pieces, chamber music of many kinds, a ballet “Maid in Birmingham,” a cantata “Three Kings Have Come,” and a few small-scale choral works.

The outwards variegation of this large output is matched, if indeed it be not surpassed, by the music’s inner diversity. The scholarly humour of “Once Upon a Time,” the grim introspection of the second-String Quartet, the cosy geniality of a number of the songs, the Attic extraversion of “Luxor,” the engaging nonsense of the “Fantasy for James Blades”- these are a few of the many facets of Parrott’s kaleidoscopic art. Where is the unity in this diversity, where the moderation in the excess?

I referred in an earlier paragraph to a youthful interest in polytonality and indeed, throughout the whole of his career, the composer seems to have had very definite leanings in this direction. Instances might be cited from some of the larger manuscripts works, but here it seems expedient to confine myself to “Leaves” (a song, to the words by Elizabeth Ward, written in 1948), not only because this is a piece which is readily accessible in print but also because, even with the mere half-dozen pages that is occupies, a number of the recurrent features of Parrott’s technique present themselves.

Here, in the first two bars of the piano part, four tonalities are hinted at: C – G flat (aurally, perhaps, F. sharp) – F – B. That they should occur in that order is in itself something worthy of special note, since the interval of the augmented fourth, like that of the augmented second, is one for which the composer appears to have a special predilection.

The voice part remains anchored to C as tonal centre, but the accompaniment, largely by means of an ostinato-like figure – Parrott makes frequent use of ostinato bases – continues to present the conflict between C and G flat.

The composer’s taste for the bizarre is yet something else that emerges from a study of this song: to how many composers would it have occurred to end the song in just this way? (the closing bars of “In Phaeacia” are obviously the work of the same hand.)

In the piano piece “Westerham” (composed in 1940 though not published till many years later) Parrott gives full rein to his penchant for the quaint and curious. So curious is this superficially unassuming work that, after examining it closely, I feel much as “Sorder” did after his study of Debussy’s “Prelude a l’apres-midi d’un faune;” “I’ve tried, honestly, I have, but I cannot understand it!”

Perhaps it is that here the composer’s sense of humour escapes me. Or it may be that humour was not the intention.

But difficulties of this kind are bound arise in the study of a composer whose personality is many-sided. There is a form of variety which is purely miscellaneous and an eclecticism which is merely epigenous.

But the diversity that is Parrott’s is neither of these. “The greater the man, the more he included” – a passing observation on Shakespeare by Cecil Grey. The art of Ian Parrott is best summarised, I think, in three words: Professionalism, resourcefulness, versatility.