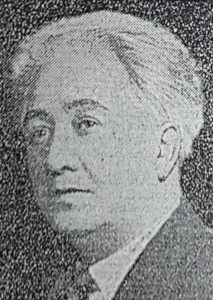 Tomorrow evening an important musical event takes in London, thanks to the British Broadcasting Corporation. It is the performance on the stage platform of the Queen’s Hall of an opera called “Lady Macbeth of Mtsensk,” the first performance in Europe outside Russia, although it has been done both in New York and in Cincinnati.

No one outside the U.S.S.R. has ever set eyes on Dmitri Shostakovitch, its composer. He is very young – he will be 30 this year – has a somewhat owlish expression on his definitely “brainy” – looking face, and has never left the city now called Leningrad. Mr. Albert Coates, who is often in Russia, and who is responsible for tomorrow’s project, calls this young man “the Mozart of Soviet Russia.” His admirers say he is the biggest creative force to appear in the world of music since Stravinsky arrived some 20 years ago; Mr. Neville Cardus says he is just a promising apprentice. At all events, you can all listen-in tomorrow and decided for yourselves; the “political content” of the music should be worth trying to catch, and the noise in one scene is said to be the greatest in operatic history.

One of the most experienced and musical of Wales’s singer takes the principal male role in this important production of an opera which takes its place with Alban Berg’s “Wozzeck,” Gershwin’s “Porgy and Bess,” and Weinberger’s “Schwanda” among the handful of operas written in a definitely modernist idiom.

He is Hughes Macklin, a robust and accomplished tenor of wide and ripe experience. Parry Jones and Tudor Davies, two other Welsh tenors younger than himself, will be on the same platform as Mr. Macklin.

I talked about the new opera with Mr. Macklin as we sat on two stools in a West End club patronised mainly by musicians. To him it is just another job at work, rather older and more experimental than most of the parts he has sung in his distinguished career as a singer. He talks with animation, his rosy, plump face crowned by a shock of white hair, giving him the air of a real Bohemian of the type now passing rapidly from us. First he told me about himself.

“I’m a North Walian, born in Caernarvon,” he said, “and I’ve been a singer for as long as I can remember. I was well known locally as a boy soprano, and used to sing in churches and in eisteddfodau all over the place.

“A very unusual thing happened to me. My voice broke practically overnight. One Sunday I was a treble – the next a full-fledged tenor. That doesn’t happen very often.”

“My success in competitions continued as a tenor, so I decided to become a professional. I got up to London, to the Royal College of Music, and was lucky in being privileged to study under Gustave Garcia, a member of an internationally famous musically family. He died quite recently – a great old man.

“Then I began a career as a singer which has taken me over most of Europe, and to the other side of the Atlantic. I’ve had one or two disappointments, as I shall tell you, but I love every minute of singing to this day.

“I was for many years the principal tenor of the Carl Rosa Company, as thousands of people in Wales remember. We did “Blodwen” once or twice, and I still glory in it. What a pity it is that conditions have removed all the incentives to composing more Welsh operas! And, of course, I have sung in oratorio and on concert platforms all over Wales, and have done everything in my power to make our lovely folk-songs known outside Wales. I have one or two rather ambitious schemes on foot in that connection just now.”

“I have sung up and down Italy, and used to get excellent notices from their critics. They could never get my name right – I was usually Ugo Maclini. Yes, I’ve sung in many an opera house in that country – very moderate-sized town as one, and Milan, runs three all the year around. If only it was like that here! I was in Milan, singing at the famous La Scala house, just about the time when the Blackshirts seized power in 1922 – but they were never very popular in Milan.”

“Talking about my name – people often wonder if I can be a Welshman with such a name. I am Welsh, and it is my real name – but there is Irish blood on my father’s side; he was related to the Macklin’s who gave a famous actor to the London stage (there’s a street named after him in Covent Garden) and another to the American stage. Such acting ability as I possess is probably hereditary, don’t you think?”

“Just before the Great War broke out I was put under contract for three years to sing at the Imperial Opera House at Berlin. (You may say what you like about the Kaiser, but he took great pains to subsidise opera). It would have been a magnificent position for me – but, of course, the War brought the whole plan to ruins.

“Opera is so unsystematically organised here that we singers can’t pretend to be happy about it.”

“We all think the same – that there should be opera for quite eight months of the year at Convent Garden, and that is should be subsidised by the State and managed by a Ministry of Fine Arts, like they have in most other countries. I don’t want to belittle the work Miss Baylis does as Sadler’s Wells; it is extremely good, and the standard is going up all the time. But there simply isn’t enough of it, that’s all.”

“I suppose you want to know my favourite role? It’s a stock question with you newspaper people. Well, I never quite know, but I suppose its Caruso’s part in ‘I Pagliacci,’ although the part of Lohengrin might have been made for me, too.”

“This thing tomorrow is one of my most interesting jobs for a long time. I don’t quite know what to say about it. The music is atonal, you know, and except for one little melodious bit I have to sing very near the end, it’s not the kind of stuff to make a very great impression at the first hearing, although with repetition I believe people would recognise Shostakovitch’s real power and originally. We shall certainly have a very big audience, I’m sure, and, no doubt, a critical one – so I must get back to Albert Coates’s house at once to rehearse and rehearse – and rehearse!”

Mr. G. Hughes Macklin, the Welsh operatic tenor, was found dead in bed at Monkseaton, Northumberland, where he had gone to give a series of nightly concerts this week. Death is believed to have been due to heart failure.

Mr. Macklin who was 47 years of age, was a native of Caernarvon, and in a few months-time would have been married to Miss Ann Thompson, of Talgarth Road, Fulham.

Shortly after midnight on Sunday he had a chat over the telephone with his fiancée, and appeared to be in excellent health.

“I went to King’s Cross with Mr. Macklin on Sunday to see him off to the north. He seemed perfectly fit and well and was in excellent spirits.”

“After midnight we had a talk over the telephone, and he told me that he had forgotten to take with him some of the music he would need during the week.”

“I sent the music on to him yesterday. When I got home in the evening there was a telegram waiting for me. A maid had taken him his morning cup of tea and found him dead.”

Miss Thompson added that she and Mr. Macklin had intended getting married sometime in October. Her mother died only a month ago.

Mr. Hughes Macklin was known to concert and opera audiences throughout the country.

Many people will remember his singing of the main tenor roles in “Cavalleria Rusticana,” “Pagliacci,” “La Boheme,” “Madame Butterfly,” “Il Trovatore,” “Meistersingers,” and other operas.

He had a great love for Schubert’s songs, of which he was a gifted exponent.

Music was always a part of his life. As a boy he sang in the choir of Bangor Cathedral.

His voice broke practically overnight. “One Sunday I was a treble and the next a full-fledged tenor,” he once said.

More than 40 leading tenor roles in opera were sung by Mr. Macklin, many of them during tours in the provinces and in Italy and Canada.

For some time he toured with the Carl Rosa Company. He also played the part of Schubert in “Lilac Time” at Cardiff Empire, and made several concert appearances at the Capitol Cinema.