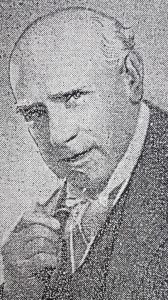 Theatre goers in London just now are arguing violently about a new production. It is in the English version of a recent Broadway success, called mysteriously “The Greeks Ha a Word For It.” It deals with the highly-specialised activity known as “gold-digging,” and reflects, amusingly, instructively, and perhaps rather pathetically, a certain phase of life in modern New York (though the title reminds us that there is nothing new under the sun).

It is salacious and unfit for properly brought up British burghers and their wives and daughters? Or is it a comedy of manners (perhaps a tragi-comedy) like Aristophanes’ plays, or Moliere’s or Sheridan’s or Congreve’s – a play of value to anyone who wants to know the truth about the world in which he happens to be living? There is much argument about this, in print and in heated conversation.

I discussed this in his dressing-room a few nights ago, with Fewlass Llewellyn, the veteran Welsh actor, who gives a sparkling performance in the role of a multi-millionaire who becomes the victim of the gold-digging activities. It was significant to find that this representative of the “old school” took decidedly the modern view.

“Of course it is a comedy of manners – or, if you like, a tragedy of manners; that is, if you care to let your imagination carry on into the future if the principal characters and to imagine what must become of them,” he said. “I enjoy it enormously – not a great play, perhaps, but it has brilliance in the dialogue. If the construction is a bit loose, the characterisation is incisive, splendid.”

Mr. Llewellyn is one of the most experienced and one of the most reliable (which does not always follow) actors in London. Nearly 70, he is one of that great army of actors all of whom were educated for a different calling but who found the magnet of the stage too strong.

In truth, his name is not Llewellyn at all. That impressive surname is his substitute for plain Jones. His grandfather was a master mariner of Kidwelly who was drowned at sea. His father lived in Hull, and it was here, in 1866, that Llewellyn Jones was born. The Fewlass is not an invention, but his mother’s maiden name Fewlass clan have lived in Hull for many generations.

When he first entered a theatre as a very young man it was to see one of the weird melodramas of George R. Sims. “And yet,” he told me, “I can remember it as clearly as I can see you there. I said to myself, at once. That’s the life for me, and from then on I couldn’t put my mind on my studies.”

Meeting Place of the Damned

“The idea was that I should be a marine engineer. The sea had been in the blood of the Jones family for generations, and we were not inclined to be put off by my grandfather’s death. It was that visit to the theatre though, which interrupted the succession of sailors in the family.”

“My decision wasn’t popular. The theatre in those days was considered the meeting place of the damned. There was only one worse place – the music hall my friends were relieved that I didn’t was to rival Dan Leno of the White-eyed Kaffir. But the word ‘Pit’ outside a theatre was held to be symbolic – who entered there abandoned all hope.

“I entered, I’d worked as an amateur for a few years, and knew a little about it. I began at Eastbourne, and did years – valuable years from the point of view of experience, but hard work – in those now defunct institutions called ‘fit-up’ tours.

“My great problem at first was my Yorkshire accent. It nearly beat me. After a struggle lasting seven years I got rid of it. There’s nothing wrong with a Yorkshire, or any other local accent – except in an actor.

“The odd and interesting thing is that then my Welsh ancestry seemed to assert itself without my realising it. Today although I have never lived in Wales for any length of time and speak no Welsh – much to my regret – I have a distinctly Welsh intonation to my voice. Although I am naturally as an actor, able to affect a number of accents to order. I do the Welsh far better than any – perfectly, so they tell me. I read the lessons every Sunday morning in the parish church at Putney, where I live. Every now and then a Welsh parishioner or visitor speaks to me, and says ‘No need to ask where you come from – the “hwyl” is unmistakable.’

Fewlass Llewellyn has had immense experience. In addition to excellent work in scores of ephemeral shows, he has played Sir Toby Belch, Bottom, Sir Hugh Evans, and several other rich Shakespearean roles; he was Pastor Manders, opposite Mrs. Patrick Campbell in Ibsen’s “Ghosts” four years ago. He has done a great deal of Shaw some Barrie, some Pirandello.

Caradoc Evans set his heart on having him as the Rev. Ben Watkin in the amazing “Taffy,” and even the most critical Welsh spectator had to admit the uncanny verisimilitude of the performance. Fewlass Llewellyn is intimately connected with, and very enthusiastic about, the Welsh National Theatre Movement. He contributed a delightful vignette to the first production in London; he has lectured to enthusiastic students at Llangollen, and he produced J.O. Francis’s “Howel of Gwent” at Neath a year ago.

In emphasising his acting I have left unmentioned many of Mr. Llewellyn’s other activities – he has made scores of films, but admits frankly that the lack of human contacts, and particularly the absence of applause with its electrifying effect on a sensitive player, has been a great factor in keeping him faithful above all to the stage. This has not prevented him from turning in masterly characterisations of bishops, businessmen, and benevolent fathers and well-meaning clerics in endless British films. He produces plays; he organises charity performances; he examines in elocution for several colleges; he was for six years chairman of the Play Actors’ Association, he does work in pastorals, he broadcasts often; and – he reads the lessons on Sunday.