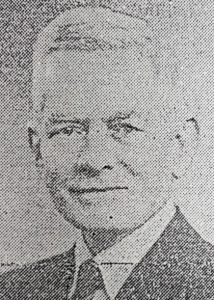 Let us now praise a famous man so that his greatness may be known to the country which begat him. The death of Dr. David de Lloyd has robbed Wales of a musical impulse she cannot afford to lose and certainly must not be allowed to forget.

It is an influence which his countrymen will do well to ponder, because it possesses rare qualities of scholarly integrity and sensitive musicianship, combined with a shrewd artistic judgement and a warm humanism.

He was by nature a quiet and unassuming man. Not his those flamboyant tricks which so readily attract the crowd. He was too conscious of his musical responsibilities to be merely self-seeking. The deliberate limitation of his field of activity has meant that many people in Wales are only half-aware of his musical worth. Some have deemed this limitation a token of aloofness, of indolence, or indifference. They are wrong “Apparent indolence is an artist is frequently the cloak for sheer, unremitting labour.”

David de Lloyd probably knew that his none-too-robust frame could ill spare the energy for the widely-publicised activities of a national leader in Welsh musical life in addition to the exacting academic standards were undoubtedly sound and his researches as thorough as they were practical.

His teaching was stubbornly orthodox at a time when novel and irresponsible methods seemed to be more fashionable. If he was not unduly impressed by the revolutionary ideas of Hindemith’s “Unterrweisung im Tonsatz (now available in English under the title Groundwork of Harmony),” it was a considered judgement. For he knew that every musical generation has its Dr. Day. (Dr. Day – a medical doctor, who wrote a treatise on “Harmony” in 1845). So he preferred to rely on Der Einfall – the inspiration which comes without theorising – as the ultimate musical criterion.

Quite rightly, then, he based his teaching of the stuff of music itself and not on theoretical ideas about it. His researches were equally prudent and progressive. His experiments in a modern realisation of Penillion as a form of instrumental as well as vocal counter-point had for me, a particular fascination. He did not reject my suggestion that in this technique lay opportunities for a novel art-form of no little subtlety and beauty. He was just as painstaking in his work for Welsh hymnody, and I have reason to believe that his untimely death has prevented even more important experiments on this direction.

As a composer, his achievements have a far greater importance than the modest dimensions of his published catalogue of works would suggest. Careful and correct, sometimes to the point of severity, his music has a sincerity and sensitiveness which were characteristic of the man. Le style c’est L’homme. His melodic utterance was intrinsically native, though never in any narrow sense.

Indeed, he may yet be to Wales what Janacek was to Czechoslovakia. For while he lacks something of the spirited vivacity of the Czech, he succeeded like him in forging a characteristic music for the very inflexions and rhythms of his native tongue, “Angof ac Atgof,” for example, is as typically Welsh as the “Lied” is German and the “melodie” French. And his operas “Gwenllian” and “Tir na N’og,” especially the latter, reveal how skilfully he could weave this native eloquence into a lucid and logical, dramatic texture. It his high time that Welsh operatic societies gave these works the recognition they richly deserve.

To some people de Lloyd’s music may seem dated. He was certainly no modernist, no monkey-Stravinsky. He would not sacrifice and intrinsic virtues of his craftsmanship for mere display, nor could he forswear the classical lineaments of his technique. His was a disciplined art, with musical roots that went deep. It was also a native art, fervent and strongly individual: an authentic Welsh voice.

If in the heightening of some of rhythmic climaxes there is, at times a lack of sheer ease and fluency with a tendency to rely too much on rhythmic formulae, this is more than made up by the man’s utter sincerity, his steady purpose and competent attention to detail.

Even in the deliberate choice of breve-notation for some portions of his “Requiem Gymraeg,” one senses the composer’s instinct to make the music look as dignified as it must sound. And what a beautiful work it is. Sombre, scholarly and sensitive, it is invested with a sustained intensity which is at once profound and serene.

It would be an insincere threnody to make wildly extravagant claims for David de Lloyd as a composer. He may not gain any outstanding international renown, because his is a music which will not easily export. But is stands as the beacon light among the welter of mediocrity which so often spoils the published lists of Welsh music and obscures the worth of those few native composers who, like de Lloyd, have diligently mastered their craft and refined their musical ideas.

There is a time for praise and a time for frankness. The voice of de Lloyd may be little heeded where the harmonious vocal efforts of a Welsh Rugger crowd or the fervent but sometimes indiscriminate zeal of a Cymanfa Ganu sound so loud. In the pursuit of music enthusiasm is not enough. There must be a due recognition of standards, a feeling for artistic restraint and an imaginative understanding. Let it be the eternal memorial of David de Lloyd to remind his countrymen to seek always, as he did, for the ultimate musical values.