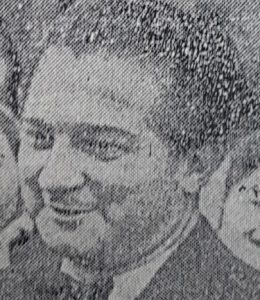 The 8,000 residents of Ammanford will long remember St. David’s Day, 1950 for today they welcomed home local born singer Donald Peers, who was returning to the town for the first time since his rise to stardom.

With him was Rae Jenkins, conductor of the B.B.C. Variety Orchestra, another native of Ammanford. Rae, however, had been home before, and it was for Donald that the massed thousands in the square outside the luncheon room waited.

They waited in vain. Some caught a glimpse of the back of his head whilst he ate his lunch at the civic reception arranged by the local council, but he and Rae Jenkins left by a back entrance before the speeches were finished. He went straight to the Palace Theatre to start rehearsing for tonight’s broadcast.

Three hours of rehearsal meant that Donald had to postpone the visits he had hoped to make to old friends.

His fans had a chance to see Donald Peers as he drove through the main streets of the town after his arrival for the reception at the council offices by the chairman of the Urban Council, Mr. A. Ernest Evans.

He was mobbed leaving and entering his car by ‘teen-age girls and women, some of whom remembered him as a boy. He signed hundreds of autographs,

Donald left the theatre to go to the house of the manager. Mr. Frank Lewis, where is father, 84-year-old ex-miner Frank Peers, waited to see him for the first time in three years.

Because Frank Peers is an evangelist he would not go into the theatre to see his son. He still preaches in the streets if Ammanford and distributes religious tracts.

While the show was going on tonight he was holding a Bible class in Glanamman, a nearby mining village.

The thousands who had been disappointed not to get tickets stood in an article outside the theatre and listened to the singing of the hero of the town over loudspeakers. They talked of the boy who had left the local grammar school to go painting railway signs in England, and had come home famous.

One of the songs he sang tonight was “Among the Hills of Wales,” the winning song in the “Welsh Rarebit” song-writing contest, the words of which were written by 30-year-old Brian Evans, a member of the “Western Mail” editorial staff, and the music by Ivor Novello.

Donald Peers, Ammanford born one of song, is to take up commercial radio. His contract with the B.B.C. expired last Wednesday.

Today he will sign a contract with Henry Towers, which, it is believed, will bring him in £15,000 a year.

Peers said last night at his home in Kingston, Surrey, “I was approached by Mr. Towers, who put forward a very attractive offer which, as a businessman, I was bound to accept.

“I know nothing in the commercial contract which will preclude me from broadcasting for the B.B.C. in the future. But is possible that the B.B.C., for their own reasons, may debar me from going on the air in a similar programme to the one I have just finished.”

Peers expects that the commercial programme will mainly on the familiar “Donald Peers” lines.

There’s no flannel about Donald Peers. Tell me another professional singer who will confess to an audience before he begins that he hasn’t any voice to speak of – let alone sing with! And it’s the same way with his autobiography, which is admirably down-to-earth in tone.

Donald’s (“Pathway” Werner Laurie; 10s 6d) has led him for a little house in College Street, Ammanford, via house-painting, pierrot shows, music-hall work and broadcasting, to that fantastic evening when nearly 9,000 people turned up at the Albert Hall to hear him give a one-man performance. Lately he’s been making a film.

He is proud of his success – even though I suspect that he has never quite fathomed why, after many years of moderate enthusiasm, the British public should have so suddenly taken him to their bosom. But when Donald Peers saw his chance he took it; and he is honest enough to tell us how much he owes to the Press.

“No reporter was passed by, Pictures were posed or at the drop of a hat, interviews were fixed, and all the concentrated energy I could muster I turned into harnessing this ‘tide in the affairs of man.’”

This quotation will also show that its author is as short on style as he is rich in honesty! But you will like the book. It’s typical of this star of variety, who makes no attempt to “put on an act” when he’s off the stage.