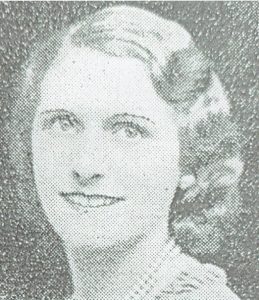 Mrs Dilys Griffiths-Davies, wife of Dr. Alfred Davies, of Blaengwynfi is to play the role of Mrs. Page in Dr. Cronin’s “The Citadel” to be filmed by Metre-Goldwyn-Mayer at Denham, with Robert Donat in the principle character.

A member of the Swansea Welsh Drama Society, she is one of for recommended by Mr. T. J. William-Hughes to Mr. Stanley Haynes, associate producer of the film who is in search for a Welsh actress to take part saw a rehearsal of Jack Jones’s “Land of my Fathers” by Swansea Little Theatre Players on Sunday.

When at Swansea Technical College, Mrs. Griffith-Davies (then Miss Mary Hughes) took a prominent part in drama as the college, and on five occasions she has been successful as an elocutionist at the National Eisteddfod.

She made her first appearance with the Swansea Welsh Drama Society last winter when, at the request of Mr. D. Clydach Thomas, the society’s director and producer, she filled a vacancy cause by the illness of one member. She had been selected for the part of Lady Macbeth in the Welsh production at the Prince of Wales Theatre Cardiff, during National Eisteddfod week.

Robert Donat who plays the main character, Dr. Andrew Manson in the film of “The Citadel,” was in the Rhondda Valley over the weekend absorbing “local colour.” 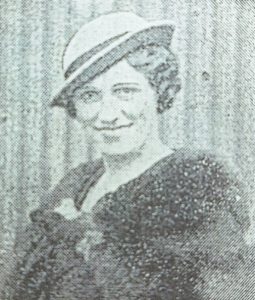 The advent of a new actress of distinction, always an event of interest in the theatrical world, is even more interesting to a fellow-country woman when that actress happens to be Welsh.

It was therefore an immense pleasure to me to have an interview the other day with Miss Dilys Davies, the leading lady of Mr. Jack Jones’s play ”Rhondda Roundabout.”

“Did you set your heart on being an actress when you were a little girl?” was almost the first question I asked. Not only because I love hearing the beginning of things was this my leading question, but also because I think that ambitions of children often afford an illuminating sidelight on their talents and characters.

No, she was never exactly what you might call one of those “stage-struck” little girls. Miss Davies admitted, but she confessed that she had always been very keen on recitation, a branch of her education in which her parents were not so interested as she was herself.

“But,” she added her blue eyes lighting up with laughter at the memory, “there’s a lot to be said for competition. Do you know, if it wasn’t for competition I don’t suppose I’d ever have been Mrs. Page on “The Citadel,” or Mrs. Shoni Lloyd in “Rhondda Roundabout.”

Then she told me the story of a 15 year-old Dilys and another girl in the same school who was good at recitation. “If she can do it, why can’t I?” said Dilys to herself.

Don’t we all know that feeling? Somebody we happen to know does something as which we rather fancy ourselves, and we think: “Why, I could do that as well,” adding sometimes; “Perhaps rather better!” In the case of the school girl Dilys it happened to be better. Not that she felt she could beat the other girl. Then, as now, there was nothing of a self-glorifying nature about this little lady from Wales, who is as charming off the stage as she is clever upon it.

She just thought she would see what she could do, studied a recitation in a very short time, and rehearsed it to herself on a train journey. “Thank goodness, I’d a carriage to myself, but I became so lost in this repeated rehearsal I forgot all about stations,” she told me. “People passing might have thought: ‘There’s a mad kid on this train.’”

Next day she won the prize at the school recital. After that it was “easier going” at home. Her father sat up and took notice, decided that his daughter really had a flair for recitation, and what is more to her great joy, himself coached her. How proud the Baptist minister must feel today of his pupil!

Dilys started on a round of eisteddfodau, collecting medals and prizes.

Since those days of juvenile triumphs Dilys Davies has travelled a long, long way. At the National Eisteddfod of 1940 she is to be an adjudicator.

“Film work was very interesting: “I loved it,” said Miss Davies, “but acting on the stage is far more exciting. There one can tell how the audiences react to one’s performance.” And. She added, I might not believe it, but she felt acute nervousness before seeing herself first on the screen in her part of Mrs. Page in “The Citadel.” This she said; was in direct contrast to her unconcern on the first night of “Rhondda Roundabout.” She did not feel in the least stage-frightened then.

“Acting with Mr. Mervyn Johns would give anybody reassurance,” she told me. “When I feel I might be nervous I have only to look at Shoni. The confidence that man gives one!”

Miss Davies considers it a very great honour to play with Mr. Johns, whose Shoni Lloyd is such a brilliant portrayal of the Welsh miner. As for Mrs. Shoni, she’s “a lovely part.”

“The old girl has lots of tiresome ways, of course,” said the actress. “After all, the poor thing might be excused for these ways considering her nerve-racked life. And anyway she has got a nice side. Not like that horrible Mrs. Page. How people must have hated me in “The Citadel.”

I assured different in private life from both these women – attractive and young – she laughed as she said. “I have to screw up my curls for Mrs. Shoni. And what do you think of her Sunday clothes – “my bits of best” as I have to call them?”

It was one of the hottest afternoons of last week and the Welsh actress looked delightfully cool in her blue and white spotted bolero suit. She has utter unself-consciousness and combines repartee with interesting conversation. High-spirited, she has, too, the real Welsh temperament.

“There are lines in the play that make we want to cry; in fact, the stupid tears will keep coming in my eyes,” she said.

Like all the members of the “Rhondda Roundabout” company she has tremendous admiration for the author of the play. “He’s just fine, is Mr. Jack Jones. We all feel we want to do our very best as much for his sake as for our own,” was her comment.

And of the producer, Mr Glen Byam Shaw, “just to listen to the speech which he made to us the first day we all met together when he gave his idea of each character in the play, that alone would be well worth coming up from Wales to hear,” said the leading lady at the Globe Theatre, who whatever applause she missed on the screen she gains nightly on the “Roundabout,” the Rhondda one.