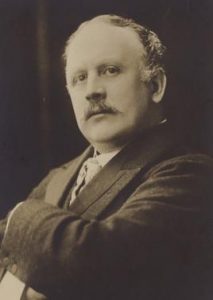 David Thomas Davies was born in Caernarvonshire in 1855, the son of a foundry worker, and was intended for the church. His father was a musician and took a keen interest in developing the love of the art so apparent in his son and at an early age he had many struggles with Beethoven’s Sonatas and other classical works so that a good foundation for his later success was then laid.

He took his name from the Nant Ffrancon Pass near his native village. He went to Jesus College Oxford and was ordained in the Church. In due course he took his B.A. and M.A. degrees at Oxford. While there he met Mr. Edwin Holland, who first discovered that he had a baritone voice of great purity and range.

On Mr. Holland’s advice Mr Ffrangcon-Davies took up the study of music seriously, and went to London where he commenced to study as the Guildhall School of Music under Mr. Latter, whom he learned the art of proper voice production and to whom he attributed a certain measure of his success.

His first public appearance was at the Free Trade Hall, Manchester, in January 1890, and soon won for himself a foremost place amongst contemporary singers. His first appearance in opera was also in Manchester when he played “Valentine” in “Faust”.

He secured instant success on the operatic stage, but he was famous in this country as the great exponent of “Elijah” in Mendelssohn’s oratorio and the finest singer of Handel. He had an extra-ordinary career and his success, with little training, was at great in America and Germany as in this country. He was so successful in Germany that he settled in Berlin for a long period and obtained fame for his singing of Bach.

Siegfried Ochs admitted that by Ffrangcon’s performance in Bach’s B minor Mass. He was the first soloist ever able to make a German audience believe in the beauty of the “Quoniam tu solus.” By his voice and enthusiasm for his art he adorned everything he sang. The curate-singer first became famous at Drury Lane in “Lohengrin” as the “Herald.”

In the biographical section by his daughter we learn that he was a hard worker as a scholar at the Friars School in Bangor, where he sang in the chapel choirs, among his friends, and alone in the hills. He first sand “Elijah” as a Yorkshire festival.

We learn from this all-to-brief sketch of his life that part of Ffrangcon’s honeymoon was spent in Cardiff in the home of Madam Clara Novello-Davies, and he was invited to sing at the popular Saturday concerts, for he which he received his first fee.

The brevity of the biographical section is explained by the writer, who comments on “my childish dread of him as a lonely giant inhabiting some cold strange universe.”

In dealing with the tragic mental breakdown of her father, she attributes it to a course of hypnotic treatment he underwent in Berlin. He was lost to the world for five years, and died in Bethlem Hospital.

Ffrangcon-Davies enjoyed the friendship of the late Sir Edward Elgar, and a series of letters from the composer of “The Dream of Gerontius” lend a special interest to the volume.

One of the letter’s he wrote to Elgar; “If I go,” says Ffrangcon-Davies, referring to a proposed engagement, “I go on the condition that I am not forced to tear out me voice to be hard. The modern accompaniment as it is played is lethal. Let the players listen to the soloist.” In “The Singing of the Future” he made much the same point in his protest against “the sacrifice of truth of expression to size of tone,” saying:

“When sound is poured in cataracts rational appreciation has perished. Ears and minds become artistically demoralised: moreover, one artistic ugliness paves the way for another. There is a limit to the size of tone if it is to be meaningful, a speaking and true tone. If any man want a standard whereby he may judge how large a tone may be, let him take the words of the text as his guide. If he cannot pronounce the words as he would pronounce them were he a cultivated actor, his tone is too big.”

Elgar wrote an introduction to Ffrangcon’s work on “The Singing of the Future,” in which he said; “The book is a serious appeal to the singer, especially the English speaking singer, and I welcome it and hope for much real and lasting good from its dissemination.”

Mr. Ernest Newman writes an introduction to the biography of the singer and his experience in the much discussed bel canto methods of the art; and concludes: “We see now how much the Elgar oratorios counted for in Ffrangcon-Davies’s development as thinker and artist, and how much these fine spirits owed to each other.”

The work on singing has been abridged, but the essential lessons against the practice of singing with the voice alone instead of with the mind remain. There are valuable lessons here for every Welsh singer or student by a great Celtic artist, who rose to the highest distinction in his chosen art.

It is a remarkable story of Celtic enthusiasm and artistic success.

His last appearance at the Albert Hall in 1907.