Reference is made in the world wireless message of the youth of Wales to the pioneers of various nations who “made it possible to send messages across the plains, over mountains, and beneath seas,” and to those who “gave words wings to fly from continent to continent.”

One of the greatest of these pioneers was a Welshman, who sent a wireless message a distance of five hundred yards while Marconi was yet a child at school.

It was a few years before his death that the pioneer work of David Edward Hughes was recognised. Subsequent history has stamped him as “one of our wonder men, this great and disappointed man.”

Hughes, the son of a cobbler at Bala, was born in 1831. When he was seven years old the family emigrated to Virginia, U.S.A., and in that country the family gained some renown as singers and harpists.

At the age of nineteen David became a professor of music at St. Joseph’s, Bardstown, Kentucky College, but all his ambitions were in the field of science. He abandon music for scientific research, and in 1856 perfected the typewriting telegraph. His patent, launched in the United States, earned him much money, and he came over to London, where his discovery brought him more money and much fame.

Honours were bestowed upon him by Napoleon III, of France, Alexander II, of Russia, and by the Emperor of Austria.

In 1877 Hughes invented the microphone – a discovery without which the telephone and radio would not have been possible. Hughes blazed the trail for Edison and Bell.

In 1879 he gave the world the induction balance. Then came the greatest discovery and disappointment of his life.

While experimenting with the microphone he picked up sounds for which he could not account. He directed his efforts to discover their source, and found that that they had been picked up from a distant telephone. The location of the sound was the first discovery of radio-sound had been picked up without wires!

From Room to Room

He now proceeded to send out messages without the assistance of wires, and succeeded in transmitting messages from one room to another, and ultimately over a distance of 1,500ft.

Towards the end of 1879 Hughes felt that his discovery was of sufficient importance to bring before the Royal Society and a select committee was chosen to view the demonstration. Then came the great disappointment – he was told that he merely imagined the sounds!

Hughes thereupon demonstrated the fact that the committee themselves could hear the sounds; but they were adamant, and refused to believe that the sounds were produced by wireless.

It was a bitter blow to Hughes, and he never wrote a word about his discoveries. A few years later Heinrich Hertz published his discoveries, and it was realised that wireless transmission was possible.

He was elected a Fellow of the Royal Society in 1880, and in 1885 received the society’s gold medal.

Sir William Crooks, a member of the committee which had pooh-poohed Hughes’s claims, told the world in 1892 of his discovery in 1880, and of how the committee of scientists had robbed him of the great honour he deserved.

Hughes died in 1900, but before his death Marconi had sent a wireless messages between England and France, and before 1901 had sent a message from England to America.

In the Science Museum, South Kensington is to be found the first radio set ever made – the work of David Edward Hughes, the son of a Bala cobbler. 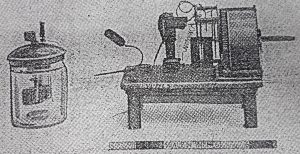 The microphones are described as follows:

1. Microphone consisting of three French nails, used by Hughes for making audible in a telephone the motion of insects imprisoned in a small gauze-covered box.
2. Microphone consisting of wood charcoal blocks pressed together by means of a spring.
3. This microphone is similar to the foregoing example except that it is mounted in a small wooden box enclosed in a larger box, apparently to act as a kind of sounding-board.
4. Carbon – rod microphone with sharpened ends resting in carbon cups or a wooden base.
5. Tubular microphone containing granulated substance forming multiple contacts
6. Glass bottle containing steel needle hanging in light contact within a small hole in carbon block. This last was probably one of those used by Hughes as a detector of what are now known as Hertzian or wireless signals. 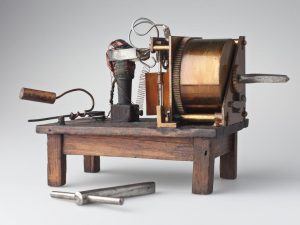 Special thanks for the Science Museum, South Kensington for the picture