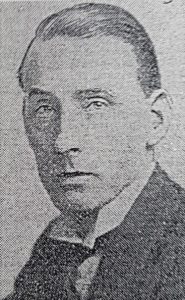 It is very unusual indeed for a first novel to achieve an immense success, but it is even more unusual for the second novel of the same author to be even more successful.

Yet it is not unfair to say that Charles Langbridge Morgan did both these things. So little do we ever hear of his early venture, “My Name is Legion,” that we have accustomed ourselves to the idea that “Portrait in a Mirror,” with which he aroused enormous interest in 1929, was his first book, and “The Fountain,” which appeared three years later, but his second.

“My Name is Legion,” his earliest book published in 1925, and aroused his attention it would be interesting to know how many of the readers, both here and America, who have enthused over Morgan’s more recent success have even heard its name, much less read it.

“Portrait in a Mirror,” came out in 1929, the same year as what is perhaps the most successful English novel of this century, J.B. Priestley’s “The Good Companion.” Both books came at a time when pessimistic critics were complaining of the decay of the English novel. Both had an immediate success.

It is not hard to account for Priestley’s success. He knew how to tell a story, he knew England, provincial England, its characters, its mannerisms, its soul. He was not afraid of sentiment, he realised that the public was tiring of, if he had ever liked, the cynicism and bitterness of many brilliant post-war writers. One of his enemies said he caught the public on the rebound from “All Quiet on the Western Front,” and one can see what he meant.

But Morgan’s success is not so easily diagnosed. There is little gusto and no “rolling around” in his work. He is, above all, a stylist. His work is tranquil and slow-moving: his characters are few, and in the physical sphere they do not do very much.

Yet “Portrait in a Mirror” was an immediate success and its author was at once adjudged an honourable link in the chain of great British novelists. His work, they said, was in the grand tradition. It was sensitive, delicate, and understanding.

The novel is an analysis of the mind of a young artist, born into English Society in the latter half of the last century. The whole period is re-created with an effortless command of detail which, in time, creates an atmosphere of absolute conviction. Morgan scorns any but the absolutely right word.

The ‘Femina Vie Heureuse Prize,’ awarded to another Welsh novelist, Richard Hughes, in 1929, was given to Morgan in 1930. His book was a pronounced material success as well as an artistic success.

Charles Morgan was not unduly elated by the welcome given his book. An artist to his finger-tips, he doubtless set far more store by his own feelings towards his manuscript at the end of his labours than by what the critics, who are but human, said.

He set about his next book slowly. It was three years before it appeared. Everyone asked whether he could repeat the success. Jealous rivals hope he would flop, as so many writers do after a big success. “The Fountain” has Holland in war-time as its setting and for its theme an unusual love affair. There is to put it very badly, but one cannot summarise or indicate the peculiar virtues of a Charles Morgan novel. Its greatness lies more in the manner than in the matter.

“The Fountain” outstripped even “Portrait in a Mirror.” It swept England, and then swept America. Last year it was the biggest seller of any novel there. The film rights were bought, and Charles Morgan became a legend.

In London, however, he is by no means a legend, but a very approachable though very busy man, with scores of interests and innumerable friends.

Like Aldous Huxley and J.B. Priestley, his much more colleagues, he will be 40 next year. He is the only son of Sir Charles Langbridge Morgan, the famous engineer, and is proud boast Welsh blood on both sides.

He has never lived in Wales, and has not as much first-hand knowledge of it as he would like. He gets a great deal of second-hand knowledge of it, however, from his wife, Hilda Vaughan, herself a writer of power and distinction. Unlike her husband, she writes of Wales, which she knows well. Her latest novel “The Soldier and the Gentlewoman,” was dramatized by the late Dorothy Massingham, and-through the public shied the grimaces and overwhelming tragedy – is probably the most interesting new play about Wales to be produced in London since the uproarious “Taffy.”

Hilda Vaughan is the daughter of Hugh Vaughan, of the Castle, Builth Wells, and is descended from the famous mystic poet Henry Vaughan, the Silurist.

Few of the thousands who revel in the calm contemplativeness of Morgan’s novels realise has a dual personality. In the evening the fastidious philosopher becomes business-like and observant journalist. Charles Morgan is the one of the most brilliant dramatic critics in the country, succeeding the legendary A.B. Walkey in 1926 as chief critic to a London newspaper. He has almost an hour in which to produce the best part of a column, excellent alike as a balanced piece of criticism and as English prose.

Morgan met Walkey just after the war. Charles Morgan was president of the Oxford University Dramatic Society, and the redoubtable “A.B.W,” was prevailed upon to pay them a visit. He asked Morgan what he meant to do, and the latter confessed that he wasn’t quite sure what, but that he’d like to be a critic.

He imagined nothing was to come of tat, and he was amazed when, after months in a publishers’ office, he was suddenly summoned to the newspaper office and given a trial. The trial was a success: he assisted Walkey till his death, when he succeeded him in one of the most-sought-after niches in journalism.

George Moore liked Charles Morgan, and for three years before his death, the Irishman, who has been described as the greatest master of the English language alive or dead, supplied him with material he wished Morgan was the only man he could bear to think of as his biographer.

I talked to Morgan soon after Moore’s death, and if was easy to see the reverence with which he approached the task. He meant to work tremendously as it for several years; it was a challenge to his claim to be an artist. The book would have been one of the greatest studies in English of a great man.

Since then, in spite of a specific request in Moore’s will that Morgan be allowed access to certain all-important letters, he has been denied access to them, and it was agreed between Moore and Morgan that the life without them would not be worth writing, he confesses now that it is likely that Moore’s life will not be written by one man he wanted to write it.

This is, perhaps, the end of the project, to have run to several volumes, in which the Dr. Johnson of this century would have found more than a Boswell. Incidentally, I believe this important piece of literary news is now published for the first time.

By far the most searching and constructive criticism of my one erratic venture into the field of authorship came from Charles Morgan. For that reason, as well as for others, it is good to be able to pay tribute in the national paper of his own country to a man who is likely to become the most important novelist of his generation.