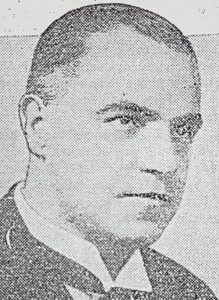 A radio date to note – next Thursday afternoon on the National programme. Tune in and you will hear a rich and resonant bass-baritone voice, with a pleasant Welsh roll of the vowels, singing four songs in English among them Tschaikowski s “Don Juan Serenade.”

It is the voice of Ceredig Jones, a Welsh singer who although he is well known in London where he resided for the last dozen years, is only the beginning to receive the recognition he deserves in his native land – a recognition which he, a sensitive and patriotic Welshman, is anxious to achieve.

Most of our leading singers today – Ben Davies, Parry Jones, Francis Russell, Arthur Fear, Walter Gwynne, Tudor Davies, come from the industrial south of Wales. I have often thought this a curious fact – that, although we are famed as a race of singers, the greater number of our star performers should have originated from that part of the country where there is the largest admixture of non-Welsh blood.

Born on a Farm

Ceredig Jones is an outstanding exception to this tendency. Watcyn Watcyns, another sonorous baritone, is an exception, too.

Born of these men were born and bred on farms, and in each case the story of the farm-boy, by his own efforts and as much by instinct as by a real knowledge of the ropes, found his way to a notable place in the in the musical world, is a romantic one. In each case it is a story which a modern press agent would exploit to the full, but neither Watcyn Watcyns nor Ceredig Jones has ever troubled to squeezed – the last drop of material advantage out of the colourful story of his early years and the route he took to musical celebrity.

On the contrary, both are men of shyness and diffidence who have relied on nothing but their gifts as singers to draw attention to themselves – a very unusual course in this era of universal seeking after the limelight.

Some years ago Ceredig Jones was singing at a number of enormous West End cinemas for a well-known magnate of the entertainment world. The great man’s press agent – in this case a woman and a university graduate – sought out Mr. Jones in his dressing-room in quest of those piquant revelations without which no press agent can live.

She asked the singer if he had anything pithy or sensational about himself she could pounce upon and send out in her weekly broadsheet for the patrons of the cinemas.

“No I don’t think so,” said Ceredig Jones; “I’m a rather ordinary sort of person.” He couldn’t think of a single fact.

Then they chatted for some time.

When they left one another the press agent – who knew her job – said: “You don’t know it, but you’ve given me just what I want. I’ve never had such a story in my life.”

Ceredig Jones comes from Cardingshire, the tiny village of Cribyn, near Lampeter, to be exact.

“I used to sing behind the plough when I was a kid,” he told me, “when no one could hear me.” By the time I was 15 I was a prodigious bass, the sensation of my acquaintances. They loved hearing my showing off on ‘Asleep on the Deep’ and going down-down-down.

“Local eisteddfodau were all the competition I got – I often cycled 25 miles each was to sing. But the prizes were not very big, and I didn’t always win.

“My parents were not too keen on my becoming a full-time singer, but I set my mind on it.

“Soon as the War was over I borrowed some money from my father and got on the train for London. I was out to widen my scope and to make a name for myself.

“You may not believe it, but that day saw my first ride in a railway train.” “I had a only a few sentences of English, but I was determined.”

“At the Royal Academy of Music they took me for a Russian. People still do.”

To learn English he avoided Welsh-speaking people until he was fluent in the new tongue. He worked furiously at his music. When he reached London he didn’t know a note of music; in two years he was a L.R.A.M. and in doing that he achieved a record.

Today he is one of the most accomplished singers in London, and a performer who has achieved a particularly high reputation – mainly through his performances in oratorio – in the very critical North of England. No longer a spectacular bass, he pigeon-holes himself as a bass-baritone, and does not care to attempt the lowest notes in the bass register. He is fond of oratorio, and I remember it was on “Judas Maccabaeus” at the Cardingshire Musical Festival seven years ago that I first heard him sing.

He sings Negro spirituals beautifully – better than any singer, apart from Robeson, I have heard: and English ballads, so he says, are his chief means of livelihood. He broadcasts occasionally, and, like most Welsh singers, transmits excellently. He would say that in his most difficult years he owed more to David Richards, the pianist and organist, than to any other man. Sir Vincent Evans thinks hem the best singer of Welsh songs he has heard.

In appearance he is broad and deep-chested dark and round-headed, with a rugged cast of feature which, combined with his abnormally deep-speaking voice, makes his being taken for a Russian easily explainable.

Although short of statue, he strikes me as being well suited for opera, but he has never tried it, and tells me he doubts whether he is cut out for it, mainly because he has specialised in the smooth type of singing which contrasts with the more staccato and declamatory style required for opera. He is modest and unmarried; his home in South London.

As I have said, you can – if you or your neighbours possess a wireless set – hear his rich voice on Thursday. If you miss him then, you can hear him from Cardiff and from Swansea in May. If you miss hi then, visit the National Eisteddfod at Neath in August and hear him on the Saturday night in the “Messiah.”

It is the first time he has been honoured by the Eisteddfod, and he is delighted.

“I’m in training for it already,” he told me.