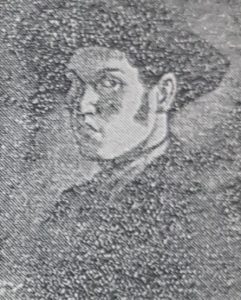 That exactest of living observers of the human comedy, Somerset, Maugham, one remarked that probably the purest form of the artist is the man who laughs uproariously and alone in his own jokes.

Even by this test – with the qualification that he usually does not laugh alone – Christopher R.W. Nevinson must be adjudged a great artist, for he has what is surely the noblest and most individual laugh in London. And he does not hesitate to exercise it over his own remarks.

It is Olympian, sonorous and sardonic; if you are in a café or in a street you will assuredly hear the laugh some time before you spot the man whence it originates. Nevinson can surely never have let five minutes pass without emitting it.

They say Nature provides all her children with machinery of some sort to cope with the special difficulties each of them is to meet. Hence Nevinson’s laugh; if he did not laugh he would perforce cry, for surely no man ever ploughed such a consistently lonely furrow through life as this burly, rubicund Welsh-Bohemian.

Nevinson’s mother was a Miss Wynne Jones, the daughter of a Welsh-speaking Cardingshire cleric who spent most of his life in the Midlands. She died a few years ago after a crowded life in which she had rivalled even her husband, Henry W. Nevinson, the famous humanitarian journalist, adventurer, and sociologist, in her toll of good works. So far as his son knows, H.W. Nevinson, that grand old man who has given his whole life to championing lost, but just, causes, is an Englishman, but his name suggests a distant ancestor from Caernarvonshire.

No young artist ever crowded more into life than Nevinson in his pre-war period. He was notorious, if not famous, long before he left his ‘teens. It was the time when Marinetti’s new Futurist doctrine was arousing storms in every European capital. Nevinson was quick to interest himself in the movement, and shares with another brilliant Celt, Wyndham Lewis, the credit (or blame – it depends upon your point of view) for introducing Futurism into England. He was much influenced in these early days by the Italian Gino Severini; and it was probably from him that Nevinson learnt that love of twentieth century buildings, mechanisms, and devices which he has never the lost, and which has inspired many of his best and most revolutionary canvases.

Those were great days, and the wildest prophesies, both favourable and otherwise, were made on Nevinson’s behalf. But no one could have guessed what his next period was to be.

Soon after Wyndham Lewis’s immortal magazine “Blast!” had made its appearance the Great War broke out. Nevinson soon received an appointment as an official “war-artist.” This label, as Crawford Flitch has said, suggests rather the same misgivings as that of “poet-laureate;” but in spite of the unbelievable priggishness, stupidity, and perversity of his official superiors, Nevinson managed to produce a series of pictures and drawings of war, the equal of which has never been seen, and God willing, never will be seen.

Christopher Nevinson, then in his twenties, established himself as the greatest war artist of all time. In the past, war had been treated by painters, not altogether unjustifiably in the days of chivalry and single combat, as romantic, manly and glamorous. Only the diabolical Spaniard Goya and centuries later, an obscure and not over-brilliant Russian (inspired, doubtless, by Tolstoy’s “War and Peace”) of the name of Vereshchagin, had emphasised war’s sordidness, horror and bestiality.

Goodbye to All That

Nevinson put an end to all this. His war-pictures in the mass say all there is to be said about war; not Barbusse or Remarque could have improved upon in his “In the Observation Ward” and “La Patrie.” His economy of detail and his ruthless emphasis of the inherent and appalling futility of the whole thing are equally remarkable. Walter Sickert said of “Le Miltrailleuse:” “It will probably remain the most authoritative and concentrated utterance on the war in the history of painting.

The war ended and Nevinson, still young, looked round. From that day to this he has galloped dynamically from one theory, one “school,” to another unerringly, seeing in each new method of approach the “something” which he can adapt to improve his own amazingly elastic and individual technique.

You cannot pigeon-hole Nevinson; he has been everything for a time – Futurist, Vortuist, Cubist, Realist – but always remains himself. There is no style of painting he has not experimented with. He works for immensely long stretches, “until I drop,” as he told me; and for rest he merely changes his medium and writes a few fiercely stimulating articles.

He went to New York, painted that astounding city with such beauty and revelation that he became a none day wonder there; then American artists “le” by James Montgomery Flagg, rose in arms against the dynamic European who had dared to reveal New York to herself, with such profit to himself.

Today his status as chief storm-centre in English art has been usurped, to some extent and appropriately enough by the New York Jew, Epstein; and Sewell Stokes has put it on record that the only time he ever saw Nevinson seriously annoyed was when an aggressive American rubber-neck rushed up to him in a London railway station, wrung his hand, bawled out “Glad to have you know me, Mr. Epstein,” and fled.

As a matter of fact, Nevinson does bear an embarrassingly close physical resemblance to his much-abused colleague; they both find it galling.

In his studio Nevinson told me all about himself and his violent progress across the years. We talked about Wales, and he quickly got on the subject of the “Western Mail.”

“It amazed me when I was down there to see how keenly everyone reads the national paper. By ten o’clock everyone knows what’s in it. They argue and take a live interest in things.

“That’s what we Celts are in the world for. We have to help the slower Saxon and Teuton to run their own affairs. Every big change, every innovation comes from the Celt. The conquered people govern their conquerors; it’s been like that ever since history began.”

At the time I write Nevinson is planning a new exhibition of his latest work. Some of the pictures, unfinished and finished, he showed me encourage me to anticipate another furious outburst of “compliments” and controversy. It also has been so with Nevinson and it always will be so. What is certain is that he will come out on top.

The gods gave this rosy-faced, thickset fighter most of the gifts; and among them was the gift of answering and flattening his critics with a few well-aimed blows. And then the Gargantuan laugh, undimmed, will echo through his studio, as it has echoed for twenty years.