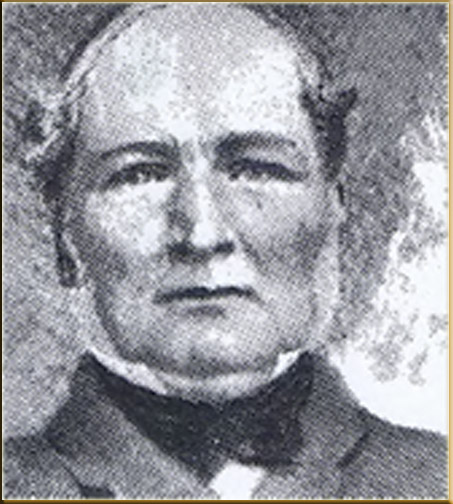 Samuel Thomas family originally came from the Paris of Magor, near Newport; his father was named John Thomas a yeoman farmer. He then moved to Merthyr as worked had a contractor at the Cyfarthfa works under the first Richard Crawshay; he was engaged in farming in the neighbourhood of the works, keeping a number of horses. He was held in high esteem, both on account of his personal character and industry. The house where he lived was built by Richard Crawshay, with whom he was on friendly terms in that part of Penyard which was ultimately absorbed in the extension of the Cyfarthfa works.

John Thomas marries Jane Pritchard, of Penyrheol, Talgarth Breconshire. She was born in 1776, and was a granddaughter of a brother of Howell Harris. Mrs Thomas, it seems, managed the farm whilst her husband attended to his contracts, and let out his horses for the conveyance of materials of the Cyfarthfa works.  Mrs Thomas was a member of the Calvinistic Methodist denomination. She was susceptible to religious enthusiasm and habitual attendant at the religious gatherings of the denomination to which he belonged; but temperamentally she was irascible, susceptible to anger, and very querulous. When she visited her son Samuel, she always had some fault to find and always something to argue about. John Thomas was not of the same religious persuasion as his wife. He started his religious life as Churchman, but afterwards became a Baptist. John Thomas dies on April 3rd 1812, at the age of forty-two, before his children reached manhood. He was buried in the burial ground attached to Ebenezer Chapel in Plymouth Street, Merthyr. When the chapel was rebuilt the grave was enclosed in the interior of the building.

John Thomas had left his wife in comfortable circumstances; she and her son Samuel were to the first Joseph Bailey nephew of Richard Crawshay, to ask him to use his influence in order that the hauling contract at Cyfarthfa works should be carried on by her. Mr Crawshay allowed it for a week or so; hence the origin of Viscount Rhondda’s story about his father being a “Door boy”. Mrs Thomas died on the 7th April 1857; her remains were interred in the graveyard belonging to Cae Pontywyll Methodist Chapel.    There were three sons of the marriage, Samuel the oldest son the other son was Rev. David Thomas, Highbury Church, Bristol who was a noted as a preacher and theologian, the other was not known.

Samuel Thomas was educated Eagle school, Cowbridge, after there he went to Taliesin William’s school at Merthyr, principally in order to study navigation, he having been promised a cadetship in the East India Company by Sir Christopher Cole, was a retired Commodore, and M.P. for one of the Glamorgan constituencies; but Sir Christopher lost his seat in Parliament and failed to fulfil his promise. Subsequently, he was apprenticed to the grocery business in a shop owned by Messrs William and Christopher James, one of whom was the father of Lord Milburn James, one of the judges of the High Court. After completing his apprenticeship, Samuel opened up for business for himself as a grocer, tea dealer and draper. His shop was considered then the best stocked shop in Merthyr, and the business prospered greatly.

Samuel Thomas was married twice, his first wife was the daughter of Benjamin Williams, of Twynyrodyn; there was one child of the marriage who died infancy. Mrs Rachel Thomas his second wife, was the daughter of Morgan Joseph, of Pencae Bach, Merthyr, who was general manager of the Plymouth Collieries and Iron Works, Merthyr a position which his father and grandfather had held before him. The Josephs were originally called Watkins, having squandered their property in Breconshire, they removed to Glyn Neath, to which a branch of the Watkins family they belonged it is impossible to say.

Samuel Thomas was High Constable for Merthyr for about four years which was between 1833 and 1837, having four watchmen to assist him; it was no small task to preserve social order among such a turbulent population. But Samuel Thomas was a strict disciplinarian, and he knew no fear, like his son, Viscount Rhondda, he never bent to any storm that beat around his head; and while he, like his son, believed in freedom of speech and action, he also believed in authority, and in enforcing law and order in the community.

Samuel Thomas was weak in aesthetic sentiments, both in their elementary and in their higher forms, such, for instance, as are involved in the appreciation of painting and sculpture. For the refinements and superfluities of our modern civilization he had no liking; his tastes were primitive. To him the aesthetic experiences were more or less useless. Like his wife be was ambitious, but, unlike her, he was not vain. It was from his mother that Viscount Rhondda inherited his self-esteem and his aesthetic tastes, she was profoundly dissatisfied with the surrounding of Ysguborwen, and was always calling for improvements, but the more she pleaded, the more her husband objected. This husband and wife were totally different Samuel Thomas was a hard business man of the calculating type, and economical to a fault. Mrs Thomas was a warm-hearted, generous-minded woman, who found it difficult to refuse help to those who needed to ask for it. But Samuel Thomas had no such scruples; he could refuse, and did, if he gave, it was from convictions, but to convince him was no easy matter. But there was one essential point upon which both husband and wife agreed, that is, in enforcing domestic discipline.

There was another important matter the husband and wife agreed upon was their children’s education. Samuel Thomas was a man of no common stamp; yet of a kind not so rare in Wales, frugal, independent and patriotic, with an honest ambition for his children’s culture and education and advancement. For these ends both husband and wife laboured and suffered cheerfully together, it may be, better that they knew; they did not live to see the true greatness of their son, or the greatness of the services which he rendered his country. Samuel Thomas died a year or so before his son left Cambridge, in 1880; his mother died sixteen years later on March 21st 1896, in London, at the age of seventy one, and was buried in the vault at St Fagan’s Trecynon.

Up to 1859, the family attended the Welsh Baptist chapel Calfaria in Aberdare, of which the Rev. Thomas Price, M.A., Ph.D., a noted man in his day, was pastor. Welsh was the main language in the house of Samuel Thomas, but Mrs Thomas was an ambitious woman, and far-sighted. She was an English nurse was engaged so that the children might get into the way of talking English. They left Calfaria Chapel and joined the English Baptist Chapel, called Carmel, on the opposite side of the road, of which the Rev. James Owen, of Swansea, was the minister. The old name was “Penypound”, a place which the Baptists took over from the Independents in 1810. Mr James Owen’s marriage there was some unpleasantness, and he subsequently resigned on the plea that his salary was insufficient. Samuel Thomas looked upon Mr James Owen as a man of great promise and they both on very cordial terms. Samuel Thomas tried to persuade Mr Owen to stay and offered to pay him out of his own pocket, any salary that he might name.

Mr Owen was succeeded by the Rev. Thomas Price, who was no relation of Dr Thomas Price; Samuel Thomas did not seem to appreciate the ministry of Rev. Price, and there was some unpleasantness, with the result that he and his family left and joined the Tabernacle English Congregational Church, during the ministry of the Rev. W. Jenkins received and accepted a call to London. He was succeeded by the Rev. J. Farr, but the last state of the church was worse than the first. Samuel Thomas was so discouraged and disgusted that he left, and afterwards did not attend any place of worship. On Sundays he used to read at home what sermonic literature he could find.

In 1842 Samuel Thomas started Dan-y-Deri Colliery, near Troedyrhiw and took Thomas Joseph, his brother-in-law, as partner and general manager. In 1849 he leased Ysguborwen from the ancestors of Lord Plymouth. Later he leased Bwlfa, in the parish of Aberdare; but the collieries were very extravagantly managed, and the partnership was dissolved in 1855. Later on he took another partner on Mr Ebenezer Lewis, but this partnership lasted a very short time, Mr Lewis retaining Bwlfa as his share. In March 1871, Samuel Thomas Leased the property which is now known as the Cambrian Collieries, and proceeded to sink a pair of pits four hundred yards deep;  he was then seventy-one years old. Though he was originally partnered in both ventures by T. Joseph, Thomas became the soul owner of Ysguborwen in 1856 and had undoubtedly put up most of the capital required. Similarly his sinking’s as Clydach Vale between 1872 and 1874, though nominally effected in partnership with O.H. Riches, were,  as far as may be inferred from the company’s registration as a joint stock company in 1895, nine-tenths financed by Samuel Thomas.

Samuel Thomas did not relinquish the grocery business when he became proprietor of the Dan-y-Deri Colliery; being a keen business and level-headed man, he wanted to be assured of his success as a colliery speculator before taking such a step.  Around the 1851 he finally he finally abandoned the grocery business in Merthyr and moved into a little cottage (Now the Full Moon) Cardiff Road, Aberaman, Aberdare, being a block of buildings called “Y Wal Wen” The White Wall. This is the cottage where it is said where Viscount Rhondda was born, with this is not true, his birth certificate says that he was born at Ysguborwen, shortly afterwards the family had moved there.

There was no bank in Aberdare in those days, and Samuel Thomas had to go to Merthyr every Friday to draw out the money that he needed to pay his workmen at the colliery. On one occasion he was attacked by robbers, but he galloped down a steep hill and got away, the Abernant money was stolen. When the fact became known, the Abernant colliers and puddlers left their work to hunt the robbers; after a good deal of searching they found the money under a large flat stone.