The Eisteddfod Committee had, on Thursday, the gratification of having another successful day in almost every respect, the attendance being as large as could be desired, and the proceedings giving great satisfaction. The only drawback was the absence of Sir Watkin Williams Wynn, Bart., M.P., who had been announced to preside, and was prevented doing so in consequence of illness. The Rev. Robert Jones, vicar of Rotherhithe, said he was sorry to have to tell them that, on account of severe illness, their respected countryman, Sir Watkin Williams Wynn, was unable to be present. Mr. Councillor Hughes had done good service to the Eisteddfod as the chairman of the committee, and he proposed that he should be asked to preside.

The Rev. Hugh Jones, Congregational minister, Birkenhead, seconded the motion, which was carried with acclamation.

Mr. Hughes, on taking the chair, made an able speech.

After bardic addresses had been given by Mr.  R. I. Jones (Port Madoc), Mr. R. Irving (Liverpool), a sailor, who was announced to have come all the way fromSunderland in order to prove his nationality, and others, Ap Madoc sang the eisteddfod song, and was loudly encored.

A prize of two guineas was offered for the best translation into English of “The Asylum,” by Tafolog, the adjudicators being the Rev. T. R. Lloyd (Yr Estyn) and Llew Llwyvo. The prize was awarded to Mr. James Clarke, Board School, Llangollen.

The best translation into English of the essay on “Shakespeare and the Welsh,” by the Rev. Dr. Edwards, Bala (for the prize of five guineas given by Mr. R. Williams, publisher of the Genedl), was adjudicated to be the production of Mr. Thomas Jones (T. Bangor), printer, Bangor. There were sixty-five competitors. The adjudicators were the Rev. Dr. Charles, Aberdovey, and Professor Rowlands: Brecon.

Mr. Brinley Richards delivered the adjudication in the competition for the prizes of seven guineas and three guineas for the best part songs in soprano, alto, tenor, and bass, without accompaniment, on the two verses commencing Hark, hark, the lark,” “Cymbeline,” Shakespeare. The com- petition was open to the natives of the Principality only. The adjudicators were Dr. Parry and Mr. Brinley Richards. The prizes were divided between competitors signing themselves “Dovey” (who was awarded the first prize) and “Bennett.” The name of the latter was Mr. W. T. Rees (Alaw Ddu), Llanelly, South Wales.

There were four competitors for prizes of £2 and £1 given for pennillion singing with the harp. The adjudicators were Ap Madoc and Eos Mai. The first prize was awarded to John Williams, Llanerchymedd, a youth of seven years, and the second to Hugh Pugh, who resides near Dolgelly.

In the competition on the harp of ”Bugeilio’r Gwenith Gwyn” (Welsh Melodies), John Thomas, for a prize of five guineas, there were five candidates, two of them being very young. Mr. Thomas awarded the prize to Walter Thomas Baker, Caerphilly, Glamorgan, a boy whose playing, Mr. Thomas said, was remarkable, Mr. Thomas subsequently announced that he had received a guinea from a lady, and Mr. Hughes added another to it, as a second prize for the young girl who had played so excellently. The young girl was called forward and invested. Her name was Christine Taylor, Knotty Ash, Liverpool.

A large number of competitors entered to contest for a prize of three guineas for singing the air (bass) “Brenin y TylwythTeg,” D. Emlyn Evans. The adjudicators were Ap Madoc and Signor Foli. The winner was adjudged to be Edward Owen, Nantlle, and the second John Williams, Ebbw Vale. A prize of ten guineas and a medal for the best pianoforte sonata, in three movements (adjudicators Dr. Parry and Mr. Brinley Richards), was awarded to Mr. W. T. Rees, Huntington, Carmarthen.

A prize of one guinea for the best englyn “To Honey” (adjudicators Clwydfardd and Gethin) was awarded to Mr. H. T. Davies, Tudwal, Pwllheli.

There were 48 competitors for a prize of three guineas for singing the tenor solo, “The enemy said,” from Handel’s “Israel in Egypt.” The adjudicators were Dr. Macfarren and Mr. Brinley Richards. The prize was awarded to Mr. Henry Felix, Rhondda Valley.

Miss Parry, Cerygydruidion, was awarded a prize of five guineas for the best essay on “The most effective means of elevating the condition and augmenting the comforts of the agricultural labourers in Wales.”

There were fourteen competitors for the prize of 25 guineas and a carved bardic chair for the best ode to Providence. The adjudicators were the Rev. Dr. Rees, E. Roberts, and W. Thomas. The award was read by the Rev. E. Roberts, and the successful competitor was the Rev. R. Williams (Hwfa Mon), Independent minister, London, who was installed as the chaired bard of 1878, according to the ancient rites of the bards.

Only two choirs competed for the prize of 20 guineas, given by the Birkenhead licensed victuallers, with a medal to the conductor, for the best rendering of “Father of Heroes,” by Dr. Calcott; “The Monk’s March,” by Dr. Parry; and “The March of the Men of Harlech,” new arrangement by Mr. J. Skeaf, of Liverpool. The competing choirs were the Liverpool Glee Union and the Liverpool Vocalists’ Union, and the prize was awarded to the latter, the conductor of which was Mr. Thomas Jones.

A prize of five guineas for the best English essay on “Michael Angelo and his influence on fine art” was awarded to a writer who signed himself “Rubens.” In the course of the afternoon the Rev. Robert Jones, Rotherhithe, delivered an address on the Welsh language, and Madame Patii sang “Caro mio ben,” in which she was loudly encored.

In the evening there was a full house, though by no means the crush of the previous occasion. Mr. Councillor John Hughes, of Liverpool, presided. The first part of the programme consisted of a performance of “Arch y Cyfammod” (the Ark of the Covenant), the prize cantata at the National Eisteddfod at Carnarvon in 1877. The solo artistes were Miss Mary Davies, soprano; Eos Morlais, tenor; and Mr. T. J. Hughes, bass; with the Cambrian Choral Society for chorus, and Mr. Wm. Parry, conductor. The cantata was very well rendered, and the author of it (Mr. D. Jenkins, M.B.) received an enthusiastic ovation on coming forward on the platform at the request of the president. Addresses were then delivered by Messrs. Samuelson and Aspinall, after which the programme was proceeded with, the artistes being Madame Patii, Miss Mary Davies, Miss Martha Harries, Mrs. Maggie Jones Williams, Signor Foli, Ap Madoc, Eos Morlais, Mr. Brinley Richards, Mr. T. J. Hughes, &c.

The fourth and concluding day of the National Eisteddfod at Birkenhead passed off on Friday under favourable auspices, there being a large attendance and very fine weather. Lord Aberdare presided, and in the course of a long address, referred to the beneficial effects of the Eisteddfod, but he said Welshmen were not entitled to any superior claims of national prominence in the present day, especially in the matter of education, in which they were behind Scotland, Ireland, and England, in consequence of the want of means of higher education.

The prize of £5 and a medal for the best Welsh hand- book to geology was given to Edward Jones Williams, engineer and surveyor, Mostyn.

The prize of two guineas for the best translation into Welsh of the “Village Blacksmith” fell to Vulcan yr Ail, who did not appear.

Edward Evans, of Nantglyn, near Denbigh, was awarded ten guineas for the best arrangement of wild flowers carved in slate, open to quarrymen of Wales only.

The prize of one guinea for the epigram to the Colorado Beetle was given to Miscyn Lledig, who did not appear.

The five guinea prize for a contralto song, upon any Welsh words, was won by Miss Renshaw, Rock Ferry.

Mrs. Jones, Maesteg, Glamorganshire, won the prize in singing a solo from the opera of “Llewelyn.”

Horatio David Beynon, Merthyr Tydvil, was the winner ofa harmonium, of the value of £18 10s, in the competition in playing on the harmonium, open to the Principality, Lancashire and Cheshire. 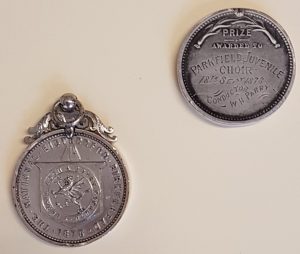 In the juvenile choral competition the prize of ten guineas was awarded to the Parkfield Juvenile Choir, Birkenhead.

There was again a large attendance at the concert on Friday evening. Mr. Alderman William Chambres, of Liverpool, presided. The performance consisted entirely of the representation of Handel s oratorio Samson,” the first oratorio which has been given at an eisteddfod with a full orchestral accompaniment. The main characters in the oratorio were apportioned-Madame Edith Wynne (Delilah), Madame Patti (Micah), Eos Morlais (Samson), and Signor Foli (Harapha). The other soloists were Miss Mary Davies (soprano), Miss Martha Harries (contralto), Ap Madoc (tenor), Mr. T. J. Hughes (bass). The solos were given with verve and exactness, but there was a lamentable break-down in one duet. The chorus was supplied by the Cambrian Choral Society, and the members performed their part with great zest and spirit, and for the most part with accuracy. The conductor was Mr. William Parry, and the leader of the orchestra (drawn almost entirely from Liverpool resources) Mr. Duncanson; Mr. J. Skeaf presided at the harmonium, and Miss Maggie Evans at the pianoforte.

This terminated the great Welsh National Eisteddfod of 1878.

It should be stated that the whole of the beautiful decorations of the pavilion were by Mr. Samuel Williams, decorator, of Argyle Street, Birkenhead, who deserves much credit for the great skill with which he carried out the artistic arrangements, under the directions of the eisteddfod committee.