On Tuesday morning the town of Portmadoc presented an animated spectacle, from the great influx of strangers, and the excitement natural to a great national gathering, in which the talent and skill of the people are so happily developed, and that in the powerful associations of their ancient name and glory.

The scene chosen for holding the present Eisteddfod is, unfortunately, a considerable (distance from the great iron thoroughfares of modern times, and access, is consequently difficult and expensive. This, no doubt, connected with the closing of the Great Exhibition, and Her Gracious Majesty’s visit to Liverpool, caused many to absent themselves; but the; admirers of beautiful scenery and of majestic grandeur must have been amply repaid the trouble of reaching Portmadoc. And the arrangements of the Committee for securing the comforts of visitors were admirable: a splendid pavilion having been erected in Brecon Square, extending 150 feet from east to west, and about 10 from north to south. The east end hall the figure of a goat on the outside, looking down as if repeating the motto of the High Sheriff:

“Rhyddid a mynydd i mi.”

In the interior, at the east end, a platform was raised for President, Patrons Committee, Bards, and Gentlemen of the Press together with reserved seats for the Ladies. The body ofthe pavilion was filled with seats with a passage midway on each side, and at the extreme end convenient standing room was provided, all under cover. The roof looked very prettily, being hung with festoons of evergreen, interspersed with flags, bearing appropriate mottos and arms of the resident nobility, and the ancient tribes of Wales.The walls were decorated with portraits, flags and mottoes, and the coup doeil was pleasing and picturesque.

Soon after 10 o’clock, the weather having cleared up, and a night of heavy rain, a procession was formed in front of the town hall, and preceded by Roger’s band, marched four a-breast to meet the president. Being thus escorted, a great number proceeded to “Ynys Calch,” when the Eisteddfod was, formally opened by the reading of proclamation and sound of trumpet. Before reaching the pavilion the rain came down in torrents and the “order of their coming” was not at all observed. This occurrence, though a shower only, threw a considerable damp on the proceedings of the morning.

Talhaiarn looked in excellent health, and, with the aid of Meurig Idris, conducted the preliminary arrangements in a manner worthy of his name and character. At the sound of trumpet, Talhaiarn called for attention and upon the president to take the chair.

Lieut. General Sir Love Parry then addressed the company in Welsh; after apologizing for his inability to speak Welsh well, he exclaimed,

Being called upon to open the Eisteddfod, he was proud to say that in early life he was the friend of William Alexander Madocks, and had the pleasure of introducing into parliament the measure for inclosing the vast tract of land upon which they stood. Mr. Madocks was a man also fostered talent and loved his country. They were indebted to him also for the excellent roads; they had in that part of the country. He had to regret the absence of the daughter of Mr Madocks through indisposition, but her heart and feelings were with them. Other tender allusions were made by the gallant president to his absent friends, and he closed an eloquent address by alluding to the liberal patronage of the Marquis of Anglesey, and his confidence in the of Eisteddfodau, repeating the words:
“Heddwch, dedwyddwch, a chymdeithasdda”

On the motion of Mr. Williams of Bron Eryri, Mr. Martin Williams, of Bryngwyn, and Mr. John Williams, M.P., were elected Vice-Presidents.

Mr. Martin Williams expressed the great pleasure he felt in promoting and cultivating the Welsh language, and in improving the condition ofthe people.

The Band played an Air, and the Bards recited their Englynion laudatory of the Eisteddfod and its patrons. The names were, Idris Yychan, Gwilym Gwalia. Gwilym Ddu o Eirion, Eos Ial, (this worthy was full f drollery), Alltud Eifion, and Dewi Ddu.

Talhaiarn expressed his delight at meeting so many gentlemen at an Eisteddfod. He declaimed against the utilitarian who asked what an Eisteddfod is good for? And pointed out the charm and beauty of Poetry, The Bard was more eloquent than usual, and wound up with a peroration upon which the audience hung in delightful suspension, and fit the close expressed their approbation in several rounds of applause. 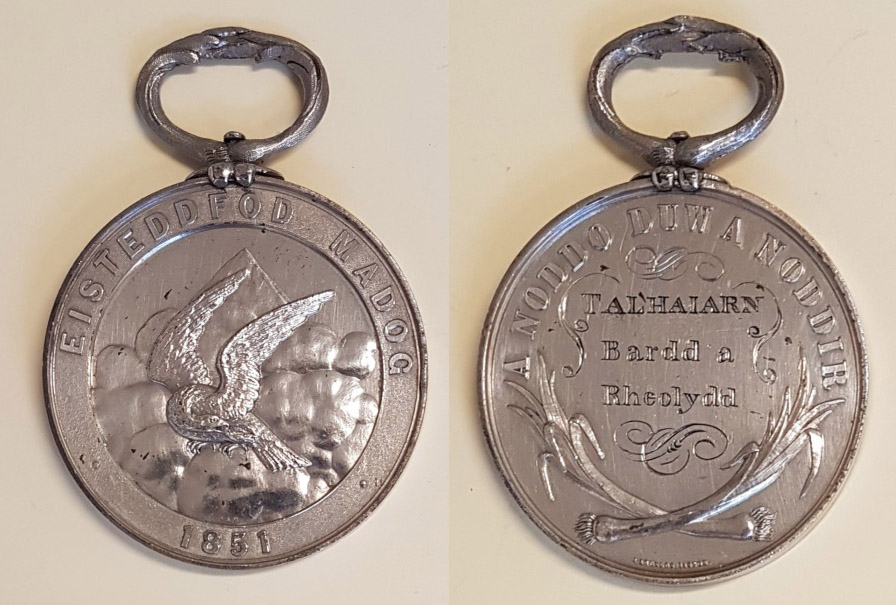 The Rev. J, Jones, of Borthwnog, near Dolgelly, repeated some patriotic stanzas in English.

The Chairman announced that Mr J. Harris, had offered a Genealogical Chart, value £1 11s 6d, as a prize for the best ten Englynion on the patronage of the Eisteddfod by the Marquis of Anglesey; and also added a high eulogium upon Eben Fardd, who had been brought out by means ofthe Eisteddfodau.

Mr. Ellis Roberts, Harpistto the Prince of Wales, performed a Solo on the harp, “Llwyn On,” or the Ash Grove.

Caledfryn came forward to read the award of the adjudications on the first prize, namely, twelve stanzas on the “Electric Telegraph.” A premium of £3 3s, and a silver medal.Awarded to “Peblig.”Mr Williams Ambrose answered to the name, and was invested by Miss Parry, of Madryn, whose personal appearance in a Welsh dress, including the hat, elicited enthusiastic applause.

Mr. Williams, of Bron Eyrie, announced that the award for the best carving of a stone, and ink stand , from Talycefn, near Conway, had been all favour of Isaac Rowland, of Llandegai. The prize was three guineas, by Mrs Roche.

In the absence of the Glee Singers, Talhaiarn, Eos Meirion, and Meuric Idris, sang “Hobyderidando,” to the infinite amusement of the Company.

For the best Linsey Waistcoat Piece, the prize of one guinea; which was awarded to “Cymro,” Robert Roberts, Llanberis Road, Carnarvon.

The Rev David James authorised John Jones ‘Talhaiarn,’ to state that the adjudication of the prize of £10, given by Mr. John Williams, M.P. the High Sheriff would be deferred until the next day, on account of the absence of his co-adjudicator.

Mr E.W. Thomas, performed a Solo on the violin, accompanied on the piano Mr Hayden. Mr Thomas handled his instrument so as to elicit the highest admiration. Indeed, he appears to be the founder of a new school of violinists.

For the poem on “the Seaman,” the Rev Morris Williams read the award. The prize of £5, was given by Capt. W. Williams, Ffriwlwyd. “Awenydd” was declared the successful candidate, Iorwerth Glan Aled, Edward Roberts, Rhyl.

For the best specimen of Ladies Welsh Woollen Scarf, a prize of £2, was awarded to Miss Catherine Griffiths, of Ffestiniog, in Merionethshire.

Air by the Band

Robin Wynn 0 Eifion, Robert Hughes, Llangybi, received the two guineas, in a purse, given by LadyHall, for the best Epitaph on Carnhuanawe. His composition excelled 126 competitors

For the best twelve yards of Wollen Cloth, of any colour or pattern, a prize of £3 was divided between “Yngeisydd am y Wobr,” and “y Brythonydd.” The latter is John Owen, Dolbenmaen, and the former, William Jones, Penmorfa

A premium of £10, and a silver medal, for the best Poem to the Memory of Robert ap Gwilym Ddu, were awarded to “YmdeithyddGalarus,” Ioan Madawg; the adjudication being read by Eben Fardd. Five compositions had been received. The bard was invested by the widow of the late Robert ap Gwilym Ddu.

[The business was proceeding when our account was despatched]