Everything augurs well for a successful week at the Rex Cinema during week commencing April 29th, when the Aberdare Operatic Society, will stage “The Belle of New York.” At the rehearsal on Monday, Mr. Sidney Jenkins, secretary reported that already over 3,000 seats had been booked, and that practically every seat had been taken for Thursday and Saturday. There were, however, a number of seats left for Tuesday, Wednesday and Friday. It was also reported that Mr. E.D. Bateman would be at the Comforts Depot in Canon Street each day with the plans for the convenience of those who wanted to book.

As the proceeds go towards the Comforts Fund, an appeal is made to all lovers of opera to book their seats now.

Mr. W.R. Griffiths (Gwilym Dar), chairman, reported that Mr. W.J. Evans, Monk Street, had been appointed stage manager, and that a deputation had visited the Rex Cinema to inspect the dressing rooms, and that all was satisfactory. Mr. Griffiths extended a welcome to Miss Mildred Stephens the accompanist after her illness, also to Mr. Karlman Jones, who has rejoined the society as “Carl Von Pumpernick.” Mr. Jones needs no introduction to opera lovers in the Aberdare Valley, as his part as Captain Andy in “Show Boat” will long be remembered. 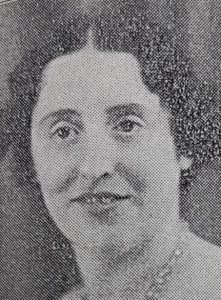 Both are well known in music circles, the bridegroom being a prominent accompanist in the Vale of Neath, and Miss Smale having been principal in Aberdare Valley performances of “Desert Song,” “Belle of New York,” “Showboat,” and also having taken a leading role in the presentation of “Esther, the beautiful Queen,” given by Duffryn Hall (Hirwaun) Choir.

A reception was held at Café Mona, Aberdare when the officiating ministers and others felicitated the happy couple. Leaving for Porthcawl on the honeymoon, the bride travelled in a green ensemble with blue fox fur.