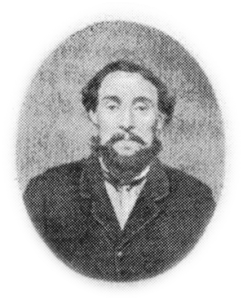 Thomas Evans was born at Cardigan 1840, he did not receive much schooling, his father was a shipwright in Cardigan town, and when eleven years of age Thomas was employed in board one of the small trading vessels which worked around the Welsh seaport towns. After a time, he worked on a bigger vessel, but soon took a dislike to the conditions of sea life, and when his ship was anchored as Milford Haven one day, he deserted, and began trudging his way to the mining township of Aberdare, which had then the reputation of being Eldorado.

By selling, or pawning, some of his clothes, he managed to obtain enough money to pay his fare on the train from Carmarthen to Aberdare when he came to Aberdare, he was around 12 years old. Here he soon began work as collier and continued in that occupation until he died on April 29th 1865, when only 25 years of age.

At an early age he started writing poetry, gaining his 1st success with a pryddest (long poem), entitled (“Gostyngeidd-rwydd” ‘Discreetly easy’) in an eisteddfod held under the auspices of the Baptist chapel in Cwmbach where he was a member in Cwmbach. He composed freely both in free and strict metres, gaining many successes at local eisteddfodau under the adjudication of poets of such eminence as Islwyn and Cynddelw.

He was unquestionably the most promising young Welsh bard of his day; he died, however, of consumption, before his rare poetic gifts were fully developed. A small volume of his poems has been published. The sweet lyric “I am but a little flower” was written by him during his last illness, he died on the 29th April 1865 and his buried in Aberdare Cemetery.

Among his best-known works are the lyrics (‘Blodeuyn bach wyf fi mewn gardd’ “I’m a little flower in a garden”) and (‘Yr Haf’ “Summer”) The latter is included in (‘Blodeugerdd,’ “An anthology”) by W. J. Gruffydd.   A collected edition of his work arranged by his friend Dafydd Morganwg with a biographical sketch by Hywel Williams was published in 1866

He was a great favourite of Alaw Goch, Dafydd Morgannwg and other notabilities in his days. He won over twenty prizes for poetical works, competing against the Chief Welsh bards of those days. He had a great friend in Howell Williams, Pant-y-Gerdinen, Cwmbach. This gentleman collaborated with Dafydd Morgannwg in collecting and publishing a volume of Telynog’s works, which had a good circulation, the proceeds going to towards the support of his mother.

All the sweetness of nature was buried in black winter’s grave,
And the wind sings a sad lament with its cold plaintive cry.
But oh, the teeming summer will come, bringing life in its arms,
And will strew rosy flowers on the face of hill and dale.

In lovely harmony the wood has put on its green mantle,
And summer is on its throne, playing its string music, the willow,
Whose harp hung silent when it was withered in winter,
Now gives forth its melody-Hush! Listen!
The world is alive.

Could I but wander with the wind
Behind the lark’s song-fountain;
Or on my way go leaping gay,

Like lambs upon the mountain;
Or smile as rarely as the Sun
Aurora’s dun cheek rosing,
Or laugh and dance like stars elate,

When Even’s gate is closing!
He set them circling in the height
To light Heaven’s darkling hollow,
Who in my forehead fixed hath?

Twin stars, His path to follow.
The lamps of Heaven burn on and on,
In virgin splendour shining;
While my poor eyes like rush-lights wan

Fade out with life’s declining.
Yet if their lids must close awhile,
In death’s dark, dolorous hour,
Full soon they’ll open with a smile,

When Christ returns with power.
Then star on star shall fall from far,
To black oblivion hasting,
But I! mine eyes in Paradise,
Shall meet The Everlasting.