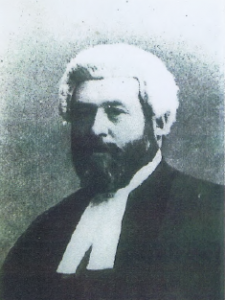 He was educated at Cowbridge grammar school, then the Normal College, Swansea, and in France. He started work as a mining engineer and later studied law, and became a barrister of the Inner Temple, 1863. He became a stipendiary magistrate for Pontypridd and Rhondda in 1872, county court judge of Mid-Wales in 1884, and Glamorgan a year later.

After an appeal in the House of Commons for bilingual judges he was appointed by the Home Secretary as stipendiary magistrate for Pontypridd and the Rhondda (1872), then a difficult area to administer, with its rapidly-growing population. It was said of him at this time that he was ‘a terror to malefactors.’ He continued in office until 1884 when he was appointed a judge of the county courts, mid-Wales circuit, to be soon afterwards (1885) promoted to the responsible position of judge of the county courts of Glamorgan in 1885, a post which he held until his death (25 March 1906). He was also chairman of the Glamorgan quarter sessions from 3 July 1894 until death.

In the year when he became a barrister; his father died, so Gwilym Williams became a wealthy landowner and proprietor of the Miskin estate with valuable mineral properties. Also, like his father invested in land in Llanwynno, Meidrim and Kidwelly Carmarthenshire.

Following his father, he was an ardent and patriotic Welshman. A great Eisteddfodwr, he often presided over-enthusiastic gatherings, addressed meetings of Cymmrodorion societies, and delivered lectures (in Welsh and English) to audiences in the industrial districts of South Wales.

He was then President and adjudicator at the Pontypridd National Eisteddfod in 1893 and intervened to order Gwilym Cowlyd off the stage for refusing to agree with the two other adjudicators in deciding the winner of the chair for the best awdl. He contributed articles to Cymru (O.M.E.) and ‘Y Geninen’ and published his father’s poetical works, edited by Dafydd Morganwg, 1903, as Gwaith Barddonol Alaw Goch.

He married Emma in 1863, Emma daughter of William Williams of Aberpergwm, and as such, a member of the only family left in Glamorgan who might genuinely claim direct descent from its native ruler, Iestyn ap Gwrgan. Emma Williams died on the 12th August 1922, and they had three sons and a daughter. She was the founder of St David’s Church Miskin.

He founded Judge’s Hall in Trealaw for variety performances, boxing tournaments and snooker. It was opened on the 30th July 1909 by Princess Louise and the Duke of Argyll. 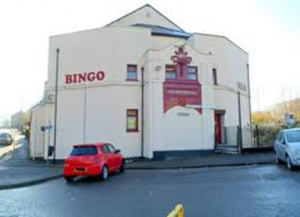 Notes from the history of St David’s Church

Rev J.P. Hughes having his hands full in trying to provide for the more popular centres tried, not ungraciously he hoped, to discourage her. Last year, however, Mrs Emma Williams with her usual pertinacity and zeal came forward and asked him if she undertook to get the money would he back her up. Such a generous proposal he could not refuse, and although he told her they were trying to raise £5,000 for work in other parts of the parish, she said she would interfere with that effort. The result was that Mrs Williams and taken a great load off his shoulders and he was grateful to her.

There was held a Grand Bazaar held at Miskin Manor, including a Gymkhana and jumping competition which was held over two days on April 10th and 11th 1901. They were opened on different days by Lady Swansea and Lord Tredegar. The amount of money taken on the weekend was £1,050. The total cost of the church which opened in 1907 was £6,300.  The materials used in its construction are principally those found in the neighbourhood. The dressing and tracery are of Quarella stone and the walls inside are lined with ashlar work of the same material. Externally the walls are faced with Quarella stone, hammered-dressed coursed work. The roofs of the nave, transepts and chancel are open and constructed of oak left clean from the plane.

On the 25th of April 1908 Miss Enid Maud Williams of Miskin Manor, Daughter of the Late Judge Gwilym Williams and Mrs Emma Eleanor Williams was married to Captain Charles Hebert Rankin of the 7th Hussars, son of Sir James and Lady Rankin, this was the first of many weddings solemnised at St David’s Church, there are no pictures of this wedding.

On February 14th 1911 the Faculty was granted to the request of Rhys Williams “having recently provided and procured the Consecration of a Private Burial Ground” to remove the graves of his Honour Judge Gwilym Williams who died March 25th 1906 and Leoline Williams died May 30th 1883 aged 12 years from Llantrisant Churchyard to be re-interred in the Private Consecrated Burial Ground of St David’s Church.

This Private Burial Ground was on ground described as “containing 176 square yards at Miskin as a place of interment for himself, being the owner for the time being of Miskin Manor and also for the interment of his Parents and Family ad his and their descendants, and the internment of the bodies of the future owners of Miskin Manor aforesaid and his/her and their family and descendants forever”. 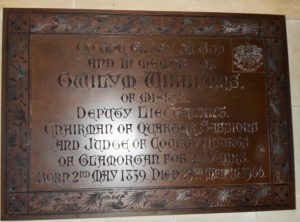 The above Brass Plate on the North wall of the church recording the death of Judge Gwilym Williams was erected in 1911. 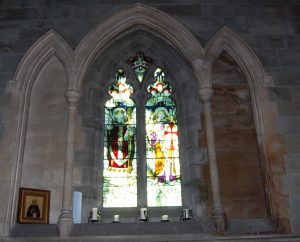 The above window was donated to the church in the memory of Judge Gwilym Williams by his lifelong friend Sir William T. Lewis Baronet (later Lord Merthyr and Senghenydd). 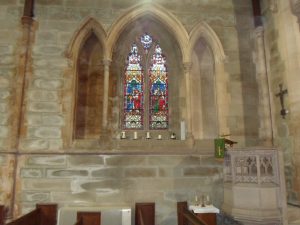 The inscription reads: “To the Glory of God and in loving memory of Emma Eleanor Williams, founder of this Church.” The Welsh inscriptions are: “Y dioddefwyr a orfu” (Those who suffer win). “Llafur orfu bobeth” (work overcomes everything).

The poems below are been translated from David Williams book published in 1903. 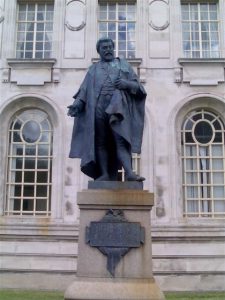 We all waited throughout yesterday
To see our dear little Gwilym,
But although he didn’t turn up, my hope is
That he is in the best of health:
Gomer spent time praying for him,
Out of respect, not out of mockery,
He asked his mother many times –
“May I go to see my brother?”

Gwladys enquired of her mother,
Out of love, with her elegant words,
“Oh look, here comes our Gwilym,
You will see, the train will stop.”
The reply was, “Oh I’ll know, if he has arrived,
Your brother is so smart,
You’ll see him right here by and by
He moves like a dart.

Worries linger very often
Lest there be some grave event,
Lest he should fall from a tree,
Directly between heaven and earth,
Or, alternatively, fall into the canal,
Or beneath some cart, there is fear,
Or fall beneath the mill in Melin Fâl,
Which is in the vicinity.

And when I awoke at daybreak,
And saw the pure light,
I didn’t hear the voice of our little Gwilym,
Singing his song early in the morning’
So often his brother and his sister
Join him with their exquisite little songs,
And there I was thinking – Before long
Not one of these will be seen!

But alas! he did not arrive, his place is empty
At the table,
And his voice is not heard, singing in the chapel meeting:
His handsome appearance, his enchanting   looks,
Are not be seen here, indeed,
But we are firm in our hope
That we shall see him before long.

We do not see, that’s the way of the world,
Through the span of hundreds of years,
There are parents who, one by one
Often lose their children:
Some children are the cause of great distress –
It’s just as well that those have a coffin:
And, indeed, rare are those
Who earn respect.

Little Gwilym is merely at school –
Why should we worry anymore?
In a little while, he will come home,
He won’t remain there for much longer,
Oh dear, dear little Gwilym,
He is not in a grave,
Come the next Sabbath, and Gwilym will be
At one with us in a feast. 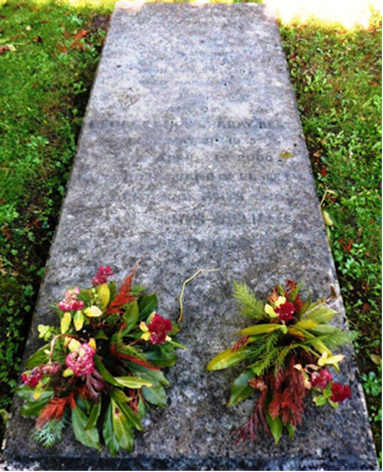 May the contented Griffiths have a great life,
And his dear, kind wife, likewise,
And little Gwilym and Gomer
Who long to see Christmas Day.

If I live just a while longer,
I shall bring along some calennig,
To bring the little boys free
Before the arrival of Christmas Day.

Verses to Gwilym when he was in France 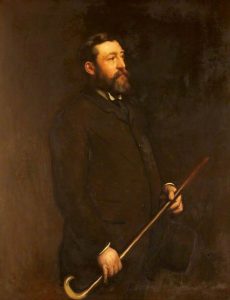 Sevenfold it behoves that the pale Frenchman,
Should show John Bull some respect,
He has a horn, great in length,
He’ll slay the world with that.

We know a little about them –
The French, they are full of pride,
Whilst you live and reside among them,
Do not give them too much attention.

Be peaceful also
Whilst you are in their midst,
And learn their language without refusal
Before you come back to your privileged old country.

Do not scowl at them in any way,
Rather, respect, each, and every one,
Without pursuing any of their foolish examples,
Nor living according to their state.

Give them a smile in greeting,
And learn their customs ceaselessly,
Your words give to them, but keep your money somewhere else,
And shake hands with the vulnerable.

And remember to live in gentility,
And practise being gentle,
That is the request of your father and mother,
And you’ll come to no harm, says Gomer.

Oh, be mindful of the advice, Gwilym,
And you will live a decent life,
And be a peacemaker, what is there more,
To drive them powerless.