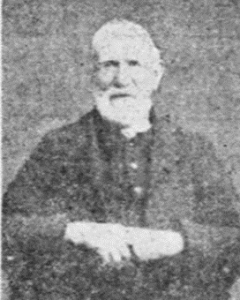 Mr. John Morgan, Cwmbach. Last Tuesday morning he had passed, away one of the oldest inhabitants in the district, Mr. John Morgan, Abernantygroes, who would be 85 years of age next April. He had been ailing for some time. His wife predeceased him a few years ago. He leaves a large family of sons and daughters, two of his sons being Dr. R. D. Morgan, J.P., Ynysybwl, and Mr. W. R. Morgan, clerk of the Aberdare District Council. In religion Mr. Morgan was a Unitarian, being one of the founders of the Cwmbach Unitarian Church and its treasurer for many years. The following appreciative notice and interview appeared in the “Aberdare Leader on July 19th, 1913.”

He was born in Ysguborwen, Trecynon, in 1832; his father was born there, and also his grandfather. This carries us back well into the beginning of the 18th century, for Mr. Morgan’s father, who died in 1865, was then 71 years of age, having first seen the light in 1794. His grandfather, Dafydd Morgan, Ysguborwen, was 91 years of age when he was gathered to his fathers. The Ysguborwen referred to here, it should be explained, is not the house now known by that name, where Mr. D. A. Thomas, the well-known coal-owner, was born, and where Mr. G. G. Hann, another gentleman interested in the black diamond, now resides.

The original name of Mr. Hann’s residence was Ty Canol (Middle House), and in the early days was occupied by “y bugail” (the shepherd). The exact birthplace, Ysguborwen proper, of Mr. Morgan and his father and grandfather, stood on a spot where now G.W.R. trains (Abernant-Hirwain section) run through daily. When that line was laid the house was razed to the ground, and the place thereof knew it no more.

So it will be seen that the family of Abernantygroes come from a very old Aberdare stock, their ancestors having lived and moved in and around Aberdare for about 200 years, or perhaps more, for Mr. John Morgan does not recollect hearing as to how long his great-grandfather had resided in the district before Dafydd Morgan was born. Our readers will, therefore, agree that very few persons are so competent to know the history of the town as the aged occupant of Abernantygroes. One thing mentioned by Mr. Morgan concerning his family history, is particularly worthy of note. In the course of our talk he stated that. neither his father nor grandfather ever smoked, and he himself had maintained this record. “Well, have you never tried a cigar or a cigarette?” Mr. Morgan was asked. “Neither pipe nor cigar nor any smoking device whatever has been in my month,” was his emphatic answer.

His parents, Mr. Morgan said further, had no schooling, and his four brothers had none. He himself had very, little education. When 11 years of age, in the year 1813, he received a quarter’s education with Mr. John Jones, father of the Rev. R. J. Jones, Broniestyn. The school (Ysgol Jones) was then where it is now. near Hen Dy Cwrdd, Trecynon. He subsequently attended a night-school at Llwydcoed, conducted by Mr. Thomas John, Jones (Cynonwyson), father of Mr. John Jenkin Jones, Abernant, traffic manager in the employment of the Bute’s; and also a night-school where the master was Dafydd Llewelyn (Pai- omingo).

Mr. Morgan left Ysguborwen when 18 years of age, and the world was now before him. Those who think that Mr. Morgan has been a farmer all his life, were greatly mistaken. For 47 years he was employed at various collieries in the Aberdare District. Starting as a collier when 18 at a Cwmbach Colliery, owned by James Lewis, Plasdraw, and Evan Lewis, he worked his way ahead until he became head manager of two collieries at Cwmbach, and with only a scant education he taught himself sufficient to perform land surveying, prepare pay sheets, and other clerical work attached to the mines.

He remained manager of these collieries until the last tram of coal was raised in February 1897, after which he took up farming at Abernantygroes. He is a man who has worked hard throughout his long life, and lias never had much illness. Last week, however, when our representative called, he was suffering from the effects of a severe cold, but even this did not deter him from performing some of his usual work. He has reared a family of 13 children, many of whom occupy responsible positions.” At the Mountain Ash Council meeting on Tuesday Councillor James Evans moved and Mr. G. H. Hall seconded a vote of condolence with Dr. Morgan on the death of his father.