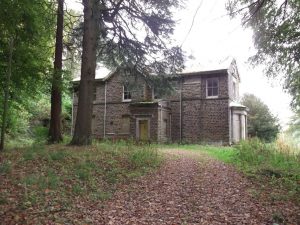 Lletty Shenkin House, Cwmbach, is one of several houses in the valley which was directly-linked with the mining industry, and its associations with Lletty Shenkin Colliery.

It had been built before the pre-industrial history had started, there had been a dwelling on this site from at least the sixteenth century, and in a survey of 1570 its name appears as Llety Jhankin. The property is also recorded in surveys of c.1510, and 1630. In its former years, its description was given as Llety Shienkin and the farm was then one of the possessions of Tomos Lewys, a prominent family of South Wales, called the Lewis’ of the Van near Caerphilly.

Lletty Shenkin means Jenkin’s Lodging, which was originally where were two homesteads, Llety Shenkin Uchaf, and Llety Shenkin Isaf, both of which took their names from a man who lived in one of them at some time, and it is said that he was the owner of both settlements. By 1853 Llety Shenkin Isaf had become known as Tyllwyd.

By the year 1800 the freehold had passed into the ownership of the Morgan’s, a local family of substantial yeomen who were connected by marriage with another ancient family in the Parish, the David’s.

A brief history of these families may he determined from monumental inscriptions on their tombs in the Parish Churchyard, which records the deaths of:

William Morgan of Lletyshenkin in (born 1736), his wife Margaret, who died May 15th 1839 Age 62, of Edward their son (died 1846 aged 32,) of Morgan David of Lletty Shenkin (died 1842) the brother of Margaret Morgan, and his brother Richard. The last of the Morgan’s to be buried there was Morgan Morgan of “The Field” Pontypridd, formerly of Llettyshenkin, who died at “Hillside”, Pontypridd on the 29th October 1901, aged 85.

Lletyshenkin Farm comprised 70 acres or thereabouts, was owned in 1844 by Edward Morgan, who circa 1843 leased the land to William Thomas, a son of the famous Robert and Lucy Thomas of Waun Wyllt, Abercanaid.  In 1843 he sank the Lletyshenkin Colliery on the estate some little distance south-east of the farmhouse. The colliery was subsequently taken over by Thomas’s brother-in-law William Rees, whose daughter Anne was to marry 1864, William Thomas Lewis of the Mardy House.

It was William Rees who replaced the then existing farmhouse with an imposing dressed stone mansion in ‘Tudorbethan’ style with a gable at the north entrance front. The house is dated 1859 and this date appears on the lintel above the main entrance. The property, including its cellars, has thirty rooms.

Llettyshenkin Colliery was to become known in the industry as one of the most dangerous collieries in England, and in 1849 an explosion there resulted in the loss of 52 lives.

William Rees was the first of a dynasty of influential Mining Engineers, and Colliery proprietors. Daniel Rees J.P., his son was to succeed him at Llettyshenkin, and his son Robert Thomas Rees, took over from Lord Merthyr (his uncle) as the Marquis of Bute’s Mineral Agent.

In 1874 Llettyshenkin Colliery and house was purchased by a North Country consortium, Burnyeat Brown & Co Ltd, made up of number of men mostly from the Liverpool and Whitehaven area. The Directors consisted of a Liverpool produce broker, a Member of Parliament, five ironmasters, an Engineer; two tobacco Manufacturers; a ship’s stores dealer; a draper and two ship owners. One of these, the principal of the Company, William Burnyeat of Whitehaven was entrusted with the operation of the Colliery, and he came to reside at Lletyshenkin House.

The history of the house, it would seem, was inseparable from that of the Colliery, for both passed into the hands of Powell Duffryn Co., and the house became the residence of both C.G. Hann and F.M. Hann, who had been responsible for the acquisition of the pit for the Company.

In 1880 William Little was living there; he was a farmer of Troedyrhiw Llechau, a Master of St David’s lodge, and in 1901 a candidate for U.D.C. elections.

After the closure of the colliery the house passed into private ownership, and the estate or what was left of it became a farm again for a while the wheel of fortune had turned a full circle. 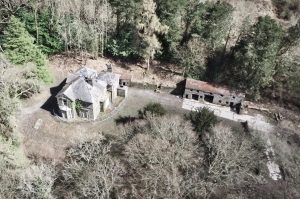 Mr. Morgan Morgan of Pontypridd, has died he was better known, as “Morgan’s the Field.” He died at the house of his son-in-law, Captain J. T. Davies, at Pontypridd last evening. He was 86 years of age, a native of Lletty-Shenkin, Aberdare, he was one of the remaining descendants of the old Graig family of Merthyr. He was highly respected at Ponty- pridd, where he had for over 50 years lived a somewhat retired life. His wife pre-deceased him some three years ago. He leaves two children, Mrs. Grover, now of Caerphilly, and Mrs. J. T. Davies, Hillside, Pontypridd. In accordance with the deceased’s wishes, the funeral, which will take place at Aberdare, will be strictly private.

Lletyshenkin House became the home of Brigadier General Bruce,  C.B., M.V.C., ( a son of Henry Campbell Bruce 2nd Baron of Aberdare and leader of the Mount Everest Expeditions of 1922 and 1924) who lived there for some years until around 1923, with his wife and a couple of Sherpa servants.

Back to Cwmbach main Page