Though Mr Richard Fothergill had long withdrawn into the retirement he had so honourably earned, he is still remembered with respect by the older generation, and his name and that of his family will go down to all-time amongst the pioneers and princes of the South Wales iron trade. Long before his birth the Fothergill’s had begun to associate themselves with these parts, for towards the close of the eighteenth century a stout north-countryman came down, bringing with him all the grit and the shrewdness that we associate with the men of the moorlands.

This Fothergill settled in the Forest of Dean, where he had a small ironworks, and in 1797 he became a partner in a firm that enlarged the existing works at Sirhowy and Tredegar. Some years later there was a dispute between the parties, and Richard Fothergill turned his attention to Glamorgan. At that time, the Abernant works, Aberdare, were being run by the Messrs. Tappenden and Homfray’s, but in 1819 they were purchased by Rowland Fothergill, the son of the pioneer, and uncle of the subject of this notice.

Rowland Fothergill had a brother who owned (Richard Fothergill II) works near Chepstow, and here in 1822 was born the Richard Fothergill who was afterwards to reflect such lustre on this family of ironmasters. Young Richard was educated at the Edinburgh Military Academy, and when he grew to man’s estate, he went to Abernant to be with his uncle on the undertaking that he “had to acquire all the knowledge possible of ironmaking, and not ironmaking as a genteel amusement, but as a good-paying venture.”

The young man learnt his lesson well. In the words of the historian of the Welsh iron and steel trades, “old Aberdarians remember well the early years of Richard Fothergill’s entry into Aberdare. As age settled down upon the uncle, and he retired to the quietude of Hensol Castle, the nephew became the recognised head, and carried on his works with energy and success.”

Abernant grew and prospered to a remarkable degree. According to a statement made in 1873 the output of finished iron 25 years earlier was only 250 tons per week, and the wage bill £80,000 per annum; but by the date mentioned, just before, the great crash-it had risen to £200,000.

It is a fact, we believe not generally known, that the great iron girders of the transept of this magnificent building, were manufactured at the Aberdare Iron Company’s works, which are now under the active superintendence of Richard Fothergill, Esq. They are perhaps as fine specimens of “hammered iron” as have ever yet been produced.

Nor did Richard Fothergill (whose father died in 1851) stop here. In 1862 the whole of the Plymouth Works at Aberdare passed into his hands. It was a mere accident, by the way, that these works were not purchased by the Clark’s of Dowlais. At that time, they were run on the cold blast system, but Mr Fothergill was enterprising enough to introduce the hot blast, and soon his works were in serious competition with the great concerns at Dowlais and Cyfarthfa.

It was at Plymouth that Mr T. W. Lewis, father of the famous “Lord Merthyr” of The Mardy, was an engineer for many years of his long life, and another important name in those days was that of William Menelaus, who owed largely to Rowland Fothergill the position he afterwards attained in the industrial history of Glamorgan. Soon after the Plymouth concern passed into the hands of Fothergill’s the old works at Penydarren followed suit, and Richard Fothergill thus acquired at Merthyr a prestige and popularity second only to that which he enjoyed at Aberdare. 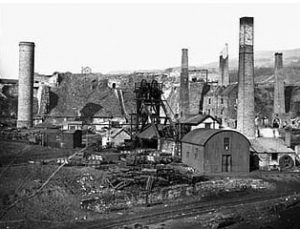 It was, however, of the latter district that he was in his time the acknowledged prince, and there he built himself a splendid mansion, which now houses the Anglican Training College of St. Michael’s at Abernant, here with great taste that he “displayed in beautifying the grounds around Abernant, clothing unsightly tips with trees, diverting the heated waste-water from the works, forming tropical ponds, and making his hot-houses, under the direction of a large staff of gardeners, a great exhibition of fruits and flowers.” It was a thriving hive of, industry over which Mr Fothergill held sway when came the crash of the early seventies, practically ruining the great ironmaster and laying waste the district for whose prosperity he had achieved so much.

The successful Fothergill was often seized with the desire to represent his fellowmen in Parliament. Richard Fothergill was no exception to the rule, and his chance came in 1868. At that famous election, when the Liberals swept the country, Merthyr for the first time returned two members. Mr Bruce (afterwards Lord Aberdare) had represented it for many years; but he was unsound on the question of the ballot, and his constituents, so large a number, of whom were working men, were deeply anxious for the introduction of a system of voting under which they could record their suffrages without fear of pressure or espionage.

One of the great periods of Fothergill’s life (it may be said, next to his entry into Parliament, his zenith) was on the occasion in September 1870, when the Iron and Steel Institute held its meeting at Merthyr Tydfil, under the presidency of the late Duke of Devonshire. Mr Fothergill not only had the distinction of being upon the Council but of taking an important part in the proceedings. The reception given by the ironmaster to the institute was also enhanced by banquets, and the distinguished party visited the various works and collieries.

Henry Richard was triumphantly returned at the head of the poll with 11.683 votes, and next came to Fothergill with 7,439: Bruce was unseated. It was a tremendous fight, and the workmen’s hurray’s and, shouts, O’r Fithergill age! (“Good old Fithergill “it was thus they pronounced the name) still lingers in the ears of those who heard it. “For a whole fortnight,” said he some years after, “my workmen never let me put my horses in my carriage.” For many years after he unsound on the question of the ballot, and his constituents, so large of whom were working men, were deeply anxious for the introduction of a System of voting under which they could record their suffrages without fear of pressure espionage. But his popularity was due not only to his Parliamentary fitness, but to his kindliness, his easy, good nature, and his paternal interest in his workmen, qualities which distinguished him from beginning to, end of his illustrious career.

Messrs. Richard and Fothergill were again triumphantly returned in 1874, but a few years later the latter retired from Parliament. His friends say that, though he made a most useful member, it was to some extent at the sacrifice of his position as a successful ironmaster. To his credit, he did good work for the coal district generally in bringing, with Lord Swansea when Sir Hussey Vivian, the superiority of Welsh coal before the Admiralty and prompting the crucial trials which gave it prominence before Northern and Scotch coal. Nixon, on the Seine and the Thames, and, wherever steam coal was the question, and Fothergill and Vivian in Parliament, gave the impulse which has done good service ever since.

Ten or fifteen years ago Mr Fothergill may be said to have severed his connection with Glamorgan, though he still occasionally visited his freehold at Penydarren. For the remainder of his days, he resided quietly at Tenby, and there on Wednesday morning, he passed peacefully away.

It would be out of place to comment just after the death of a once conspicuous celebrity upon financial and commercial vicissitudes. Here let us only glance rapidly at the scene upon which Fothergill entered, into power. Abernant was in full action; Llwydcoed with the energetic and able management, of Rhys Hopkin Rees; Plymouth and Pentrebach in full swing; Abernant House a scene of brilliancy. 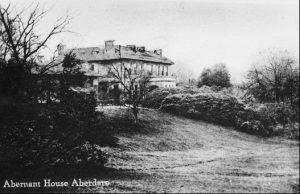 A few days ago, he opened a letter sent him enclosing a ballad addressed to himself and his wife. They both, read it through together, he could not trust himself to read it alone. They referred to the hopeful starting of the works. The lines to which he would venture to trust his voice to give utterance, for he could not trust himself to repeat the others, were as follows:

I see a day approaching
Of happiness untold,
When furnaces be roaring,
And iron in the mould
And mighty wheels revolving.
Resounding through the vale
And ponderous hammers sounding
Much louder than the gale.

There will be many a mother
Declaring now with glee
The sound of mills and forges
Are golden bells to me
I’ve been for many a year
In dire need and want,
Since steam has disappeared
From busy Abernant.

Then the change! The whirling wheels stopped, the lurid glow of furnaces ended, collieries still teeming with coal quiet, a paralysis upon all things, disastrous to individuals, to business, to banks. Now, thanks to the energy of a few and the coal wealth of the district, while comparatively good times have been won again, we have no memorial left of the Fothergill regime other than those which awakened sorrow for his misfortunes and, for those associated with him. In a day of hopefulness, when he was entering Parliament, Penydarran was started for a few hours. Now only the site remains; the works are brushed away. Abernant, once a scene of untiring activity, is represented by a paying office for colliers; Llwydcoed by a carpenter’s room; Plymouth Works by a fitting shop for colliers. Such is the picture brought to the mind’s eye by the announcement that the busiest actor in the old scene of ironmaking has now become, like his works, a memory. 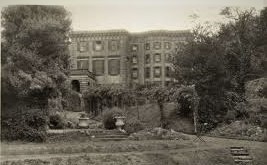 The death is reported of Mr R. Fothergill, one of the great Welsh ironmasters. He died at Tenby on Wednesday, at the age of 81. Mr Fothergill was a Liberal member for Merthyr Boroughs from 1868 to 1880. He erected Abernant House, now known as St. Michael’s College. He was twice married, first to a sister of the late Mr James Lewis, Plasdraw, and afterwards to Miss Rodden, a niece of Mr Thomas Brown, one of the owners of the Ebbw Vale Works and Collieries. In 1854 he was elected the first chairman of the Local Board of Health.

The funeral of Mr Richard Fothergill at Tenby on Saturday was noticeably quiet, almost a private, ceremonial, quite in keeping with the life of seclusion which the deceased gentleman led for many years past. Beyond the family and his immediate circle of friends, there were no representatives present of the great business world with which he had so long been actively connected. Punctually at 11.30, the cortege left the imposing mansion, Sion House, on its way to; the cemetery, the coffin, which was of panelled oak with brass fittings, being carried by bearers.

The coffin bore the following inscription: