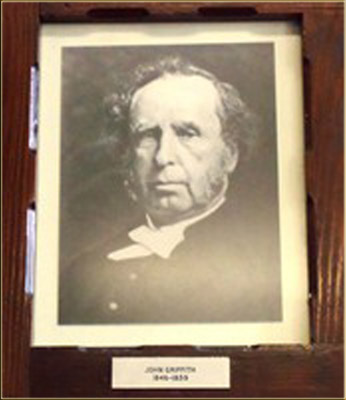 John Griffith was born on 1818 the son of gentleman farmer at Llanbadarnfawr near Aberystwyth; he attended the church school at Ystrad Meurig. He continued his education at Christ’s College Cambridge in 1842.

In 1843 he was ordained by the Bishop of Chester and the enjoyed the curacy of Astbury in Cheshire, he was persuaded to use his social connections and obtained the valuable patronage of Sir Stephen Glynne M.P., who was the brother-in-law of the Prime Minister W.E. Gladstone, for a short period he was the family chaplain at Harwarden, then his finances became difficult and the in 1846 he was forced to seek alternative employment.

He attracted the attention of the second Marquis of Bute which came about in two ways.

1 – He unsuccessfully applied for a post at Magdalene Hospital London, of which the Marquess was the governor.

2 – He began writing extremely outspoken articles to the press attacking the abuses which persisted in the established church. He sent these letters to the “Cardiff and Merthyr Guardian” under the nom-de-plume of ‘Cambro Sacerdos’; that newspaper was owned by the Marquess who believed in the reformation of the church.

The Marquess was well aware of the terrible conditions if the industrial valleys and particularly of the plight of Aberdare, where he owned a large estate, was Lord of the Manor and held the right of Patronage of the Church. He urgently needed a clergyman in the newly industrialised parish. The Rev Griffith who reflected the evangelism of the Marquess, became the obvious choice if man to be appointed to the vacant parish of Aberdare.

He still wrote letters to the “Cardiff and Merthyr Guardian” this then upset the Bishop of Copleston that he forbade him writing further letter to the paper. This did not stop the Vicar from writing letter, though he respected the wishes or commands of the Bishop and stopped writing to the respected paper. He sent the instead or the paper “John Bull” with its motto “Without Fear or Favour”.

He married twice his first wife was Sarah Frances King, the daughter if a West Indian merchant, his second marriage was in 1863 to Louisa Stuart, daughter of Alexander Stuart of the Isle of Bute, these marriages gave him five children, two sons and three daughters.

In 1850 he inherited the Braith-y-Celin estate near Aberdovey, where he and his family would spend the summer months; he owned his own yacht, which allowed him to exercise his skill and enjoyment of sailing along the coastline of Cardiganshire.
He was a keen Welshman made a study of Welsh history and Welsh literature and was an enthusiastic member of the Cambrian Archaeological Society. On the 4th of March 1884 he shocked many members of the church when he spoke at a public meeting at Swansea in favour of the disestablishment of Church in Wales.

When he just started his residence in the Parish of Aberdare he became embroiled in a terrible scandal, his infamous indictment of Aberdare in the “Blue Books” the Reports of the Commission of inquiry into the state of Education in Wales, may have been coloured by his rural sense of class, but it more likely  a deliberate exaggeration of the truth to attract the attention of the government of England to the desperate need for more churches and schools in South Wales, this was the first blast at the Establishment.

This episode was a for him  who was lampooned in the press and by the Welsh Baptist Minister Dr Thomas Price of Calfaria Chapel, Aberdare who inflamed the non-conformists  and held public meetings in the chapels to deny the vicar’s statement. He wrote further letters that were basically true, about the conditions of the valley but were ignored until the strike in 1849-50, which ended with the murder of the black leg worker, John Thomas of Cwmbach.

Between the years 1850 and 1859 he built further churches besides St Elvan’s at St Fagan’s Trecynon and St Lleurwg’s Church Hirwaun.