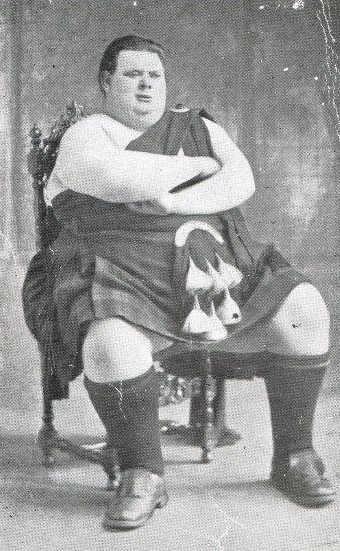 Described as the “empire’s heaviest subject,” Colosso a young man 24 years of age, has been on view as a show situated in Markey Yard, Market Street, Aberdare for several weeks. Hundreds of people paid a visit to the show to see him, and were amazed as his tremendous size.

It was claimed for him that he turned 44 stone, while he measured eight feet around his waist.

Early last week he became ill and succumbed on Wednesday night, January 21st, to influenza as his lodgings at 5 Hall St, Aberdare.

The coffin was made by Mr J. Zachariah, undertaker Aberdare, aroused great curiosity among the public, and on Friday crowds of people visited Mr Zachariah’s workshop to see it. The coffin was of elm, and weighed three hundredweight, being 7ft 6in long, 3ft 6in wide, and 2ft 2in deep. Colosso’s baptismal name was Charles Dunbar, and he was a native of Clydebank, near Glasgow.

The funeral was on Saturday, interment being at Aberdare Cemetery. It was estimated that from 15,000 to 20,000 people lined the streets between Hall St and the Cemetery Gates. The chief mourners were; Mr John Dunbar, Clydebank, father; Miss Lucy Wilson fiancée; Mr and Mrs Brose Harvey, owners of the show, with whom deceased was associated. The body was conveyed to the Cemetery in a lorry drawn by two horses, instead pf the customary hearse.

The scene at the graveside was pathetic. There were 16 bearers, and after they had lowered the coffin into the grave, the Rev W.G. Watkins, Carmel E.B. Church, Aberdare conducted a simple but impressive service. The father stood by his son’s grave until the gravediggers had filled in the grave. He then placed some beautiful floral tributes on it. Mrs Dunbar deceased’s mother was unable to be present, and the father remarked to some people present that he could return home and tell his wife that he had seen the last of poor Charlie.

The deceased was one of a large family, but other members were of normal size.

Wonderfully well informed Charlie could converse freely in French as well as English, and he had purposed going to America with a view of posing for the films.
Deceased was a Buff, and his father who is an official in the dockyard at Clydebank, is a Freemason. Mr J. Zachariah, Aberdare furnished the funeral throughout.