The latest edition of Glo, published by Big Pit: National Coal Museum, relates the personal experiences of Welsh miners during World War I.

Miners of Wales were traditionally sceptical about appeals to patriotism; but like other men, many miners were soon swept away by the enthusiasm for the war. Some 250,000 miners enlisted before the Government, desperate for coal to fuel the war economy, halted further recruitment. Most men served as infantrymen in Welsh or English infantry battalions. Many served in other branches of the services, not only in France and Belgium but in Italy, Greece, Gallipoli, Palestine, Egypt, Mesopotamia, East Africa and even China.

The extract that follows deals with one of the lesser-known aspects: the tunnelling beneath enemy lines and, in particular, the specialist rescue units that were set up.

Early in the mining war, so many skilled tunnellers had been killed or injured by the gasses released by the explosives used underground that similar rescue facilities to those in coal mining needed to be organised.

A special mines rescue school was set up early in 1916 and eventually no British mining shaft was further than 200 metres from an underground rescue station. Named after the civilian rescue breathing equipment they used, “Proto-men,” were hand-picked and selected for coolness under pressure. Two men were on duty at all times, with a stock of rescue equipment ready to hand.

There are many tales to tell of rescue efforts beneath the trenches, but the most famous is that which resulted in the only award to a tunneller of the Victoria Cross. It was an episode in which Welsh miners were intimately involved. 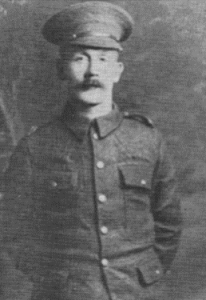 Corporal Isaac Rees Evans was a miner at New Tredegar. As a Special Reservist in the Royal Welch Fusiliers, he was immediately called up and landed in France in December 1914 as a replacement for one of the three battalions of the Royal Welch Fusiliers already serving in France. A year later Evans was discharged from the Army as a time expired reservist. Just two months later in February 1916, he re-enlisted in the Royal Engineers and joined 254 Tunnelling Company. One of his friends in 254 Tunnelling Company was an Englishman called William Hackett.

Like many men of his generation Sapper Hackett was illiterate and relied on his younger friend to write his letters home for him. On the morning of 22 June 1916 Hackett and four other men were driving a tunnel towards the enemy lines in the Givenchy area when the explosion of a German mine blew in twenty-five feet of the tunnel, trapping the five men.

The crater formed at the surface by the German mine was about 120 yards long, over 70 yards wide and some 30 feet deep. It was given the name the Red Dragon Crater because the mine had exploded directly under B Company of the 2nd Royal Welch Fusiliers, of the 38th (Welsh) Division, killing or injuring some two thirds of the company. The remnants of the Battalion had recovered quickly though and defeated a large German raid. 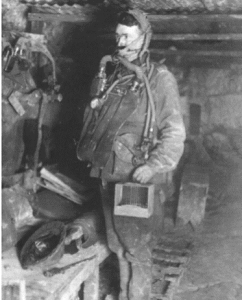 A “Proto-man” from the 3rd Australian Tunnelling Company, at a mine
rescue station at the Hulluch tunnels, Loos, France, 31 January 1918

Back underground a rescue party was immediately organised. After two days of digging a small hole was formed through the fallen earth and broken timbers. Hackett helped three men to safety, but he refused to leave 22-year-old Thomas Collins, who had been attached to 254 Company from the Swansea Pals and was seriously injured. Hackett is reported to have said “I am a tunneller, I must look after the others first.” The rescuers worked on, but the gallery collapsed again, entombing the two men. Both still lie beneath the fields of Givenchy today.

One of the men who attempted to rescue Hackett and Thomas Collins was Sapper Albert Mallows from Seven Sisters. He was a miner who had also served in the Swansea Pals before transferring to 254 Company and training as a “Proto-man.”

For his selfless act Hackett was eventually awarded the Victoria Cross, the only tunneller to be, awarded this medal. After Hackett’s death Evans wrote to his widow Alice, who was already dealing. with misfortune as her 16-year-old son Arthur, a coal miner, had lost a leg in a pit accident a month before his father’s death. Following the above incident, Evans and Mallows continued to serve with 254 Company working in the Givenchy sector until May 1917, when the company moved north to the Ypres salient.

The company remained here throughout the Battle of Passchendaele, constructing dugouts to protect the infantry from shellfire. It was while on this work on 1 August 1917 that Sapper Mallows’s right leg was badly shattered, and he died later the same day in a clearing hospital. He was 21 years old.

The company was still working on dugout schemes on the Passchendaele battlefield on 13 March 1918 when the Germans bombarded the area with gas shells. An officer and twenty-one other ranks of 254 Company were wounded and Corporal Evans and four other men were killed.

Glo is an occasional magazine produced by Big Pit National Coal Museum: each one of which is devoted to a single topic relating to the coal industry in Wales. This edition is entitled When Dai Became Tommy and looks at the experiences of Welsh miners in the First World War.